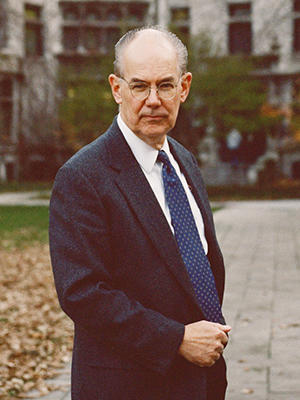 John J. Mearsheimer, R. Wendell Harrison Distinguished Service Professor of Political Science and the co-director of the Program on International Security Policy at the University of Chicago, delivered the Henry L. Stimson Lectures on World Affairs at the Whitney and Betty MacMillan Center for International and Area Studies at Yale in November. In a series of three lectures, under the common theme of “Liberal Ideals & International Realities,” Professor Mearsheimer gave some pause to the current liberal international order which operates under the insignia of universal human rights and the Responsibility to Protect. (view videos)

Mearsheimer, the founder of the offensive realist school of international relations theory—which contends that the anarchic structure of the international system is the primary cause of international conflict—underscored the enduring salience of great-power rivalry, the balance of power, and nuclear weapons as lynchpins of global peace. Building on the theories he expounded in his classic work, The Tragedy of Great Power Politics (Norton, 2001), Mearsheimer took to task the “blob,” i.e. the American foreign policy establishment since the end of the Cold War, for pursuing the agenda of “liberal hegemony.” This pursuit, he said, meant that America “quickly became consumed in spreading liberal democracy across the globe.”

Liberal Ideals and International Realities is a project to unearth “the relationship between liberalism, nationalism, and realism,” Mearsheimer said. For too long theorists of international relations, and especially proponents of liberal hegemony, have ignored nationalism, “the most powerful ideological tool in the world.” The upshot, he maintained, has been that people fail to realize that “realism and nationalism are more powerful forces that undermine liberalism at every turn.” Mearsheimer argued that “liberal hegemony was bound to fail.” “The question,” he continued, “is why?”

The opening lecture, “The Roots of Liberal Hegemony,” partially answered this question by reconstructing the origins of liberal hegemony from the ground up. It is crucial to distinguish between “liberalism at home and liberalism abroad,” Mearsheimer argued. “Liberalism by itself is not a bad thing. It is only when we try to take liberalism abroad that things become problematic.” The “roots” of liberalism stem from two principal questions, he said. “Are people social beings or does it make more sense to emphasize their individuality? And, have our critical faculties developed to the point that we can have universal consensus on the good life?”

For liberals, “humans are atomistic individuals, and it is impossible to come close to reaching a universal consensus on questions about the good life,” Mearsheimer said. The two answers, what he called the “founding assumptions of liberalism,” when put together “have a potential for disagreement that can be so profound as to lead to violence.”

“The liberal solution to this destructive potential,” Mearsheimer told the audience, “was to combine inalienable rights for each individual, tolerance toward other versions of the good life, and the night-watchman state to preserve order.” This focus on the individual, he argued, “turned liberalism into a universalist ideology.” Mearsheimer further distinguished between two versions of “political liberalism,” the modus vivendi approach exemplified by the likes of John Gray and a more progressive variant that is founded on the idea of positive rights and the desirability and efficacy of “social engineering.” “We live in a world where the progressive version has trumped modus vivendi.”

“The triumph of progressive liberalism has occurred not at the level of rhetoric but at the level of practice,” Mearsheimer maintained. “The Democrats and the Republicans are both committed to positive rights and social engineering.” That, precisely, is the problem because “it doesn’t take too long to believe that you can engage in social engineering abroad as well,” he cautioned. “The focus on individuals leads liberals to believe everyone in the world should have the same rights,” leading to foolhardy military adventures and foreign policy quagmires like Afghanistan and Iraq.

This critique was the subject of Mearsheimer’s second lecture, “The False Promise of Liberal Hegemony.” Liberal hegemony is characterized “by a foreign policy that emphasizes the spreading of liberal democracy,” he said. This tendency manifests itself for three reasons. “One, to protect human rights across the world. Two, to cause international peace. And three, to protect liberalism at home,” he outlined.

Mearsheimer points out that the emphasis on inalienable rights of the individual leads to the conclusion that “non-liberal governments are in a state of aggression against their own people.” “You go from a modest policy of limited military interventions in cases of gross violations of human rights,” he continued, “to the decision that the best way to protect rights is to populate the planet with liberal democracies.” Once a country becomes a liberal democracy, individual rights are protected by definition. Moreover, “turning countries into liberal democracies is thought to solve the twin problems of nuclear proliferation and terrorism,” he said.

The “false promise” of liberal hegemony is evident in the propensity of the United States to engage in social engineering on a global scale since the end of the Cold War. “Social engineering is at the heart of modern liberalism,” Mearsheimer said. “When you put the distribution of power, this liberal DNA, and the belief in social engineering, you’re off to the races.”

Liberal hegemony leads to a “super ambitious and heavily militarized foreign policy,” Mearsheimer continued. “The United States has fought seven separate wars since the Cold War ended. It is a country that is addicted to war.” For Mearsheimer, both NATO expansion and the Bush Doctrine were driven by a liberal logic of democratization across the globe. “Of course, it all crashed and burned. I can think of no case in the history of the United States where we pursued a foreign policy as ambitious and foolish as this.”

For Mearsheimer, liberal hegemony is doomed because social engineering in foreign countries is an impossible exercise. Furthermore, “nationalism is such a powerful force that is causes target states to resist such foreign interventions,” he argued. “Nationalism is all about self-determination and sovereignty, so no wonder these countries resist US interventions.” He also pointed out that “people will often sacrifice rights for stability.” In effect, “liberal hegemony is a hard policy to sell,” Mearsheimer argued, “and it in fact goes against core American values by turning the United States into a militarized state.”

In the last of his three lectures, “The Case for Restraint,” Mearsheimer outlined a realist alternative to the fantasies of liberal hegemony. “Restraint is a realist foreign policy. We need it because we should be getting out of the business of spreading democracy across the globe, especially with aggressive policies,” he argued. Of course, realist foreign policies are also prone to conflict, since “the structure of the international system is not benign and the end-game of great powers is to become a hegemon.”

However, there are crucial differences between a liberal hegemon and a realist one. “Realists only want to fight in areas of geopolitical significance, like Europe, the Persian Gulf, and East Asia,” Mearsheimer reminded us. “Realists understand balancing behavior, liberals don’t. And realists are basically Clausewitzians—they understand that war is in the realm of unintended consequences.” In short, “being a realist makes one incredibly cautious,” he said. “Realism is not a recipe for peace. But it is a hell of a lot more peaceful than liberal hegemony.”

The misadventure in Iraq, for Mearsheimer, was a misguided attempt to revive the Cold War domino theory, which argued that a regime change in one country would set off a chain reaction in neighboring countries. “We tried to do this in Iraq and then the rest of the Middle East. But the fate of the domino theory is that it’s a joke,” he said. This sort of interventionism only leads to overextension. Mearsheimer argued that “the United States should not invade other countries at a time that China is rising, because the Chinese would seize the advantage in the international system.”

In conclusion, Mearsheimer speculated about what the future looks like for the United States. “The first future world is multipolar,” he said, “with the rise of China and the rehabilitation of Russia. The second is unipolar, where China stumbles and Russia declines.” The nature of the international system would also determine the fate of liberal hegemony. “Multipolarity would lead to the end of liberal hegemony, while unipolarity is fertile ground for the policy.”

Using the framework advanced by Nuno Monteiro, Associate Professor of Political Science at Yale, in his Theory of Unipolar Politics (Cambridge, 2014), Mearsheimer reiterated that hegemon in a unipolar world would have three long-term strategies of foreign policy. “The unipole can go home because it’s too powerful and secure. It can stay involved abroad and use its power to maintain the status quo. Or it can alter the status quo,” he stated. The third option led to the pursuit of liberal hegemony in the post-Cold War period.

Mearsheimer saw some cause for optimism in the coming years. “The decision to adopt liberal hegemony is very different from the decision to continue it or return to it. The United States now has now run the experiment and knows that it leads to costly failures,” he said. “We have a rich history of restraint. Realists believe that states learn from the past and possess agency, and the United States will hopefully have learned a hard lesson from its interventions in Iraq and Afghanistan.”

Professor Mearsheimer’s three lecture topics will be included in a book published by Yale University Press as part of the Henry L. Stimson Lectures Series. Since 1998, the MacMillan Center and the Yale University Press have collaborated to bring distinguished diplomats and foreign policy experts and scholars to Yale to lecture on their books that are published by the Yale Press.