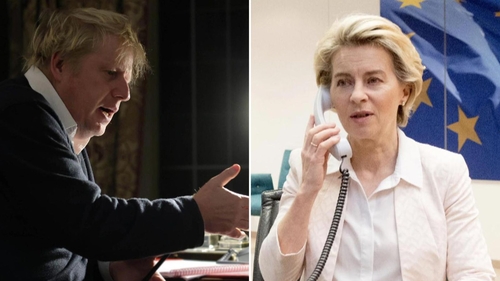 On November 19, the EU-UK negotiation of an agreement on their relationship after the UK leaves the EU’s internal market and customs union at midnight on December 31 was interrupted when Michel Barnier, the EU’s chief negotiator, announced that one of the high-level members of the EU team had tested positive for Covid-19 and that, in accordance with Belgian guidelines,  he and the other high-level members would be self-isolating. He and Lord David Frost, the UK’s chief negotiator, agreed to suspend the in-person negotiation at their level while the teams continued their work online. On November 27, Barnier announced that he and his team were no longer in quarantine and the in-person negotiation could resume. He travelled to London that evening and the in-person negotiation resumed the next day and continued last week.

But after a full week of negotiation, with little progress on the issues on which the negotiation has been stalemated for months and with time running out to reach an agreement that could, after being turned into legal text, translated into at least some if not all of the EU’s official languages, and reviewed and approved by the UK and the EU Parliament and member states, take effect at midnight on December 31, last Friday Barnier and Frost issued a joint statement: “After one week of intense negotiations in London, the two Chief Negotiators agreed today that the conditions for an agreement are not met, due to significant divergences on level playing field, governance and fisheries. On this basis, they agreed to pause the talks in order to brief their Principals on the state of play of the negotiations. President von der Leyen and Prime Minister Johnson will discuss the state of play tomorrow afternoon.” Barnier returned to Brussels to brief von der Leyen on the negotiations.

Last Saturday, von der Leyen and Johnson spoke by phone for an hour and a half, after which they issued a joint statement: “In a phone call today on the on-going negotiations between the European Union and the United Kingdom, we welcomed the fact that progress has been achieved in many areas. Nevertheless, significant differences remain on three critical issues: level playing field, governance and fisheries. Both sides underlined that no agreement is feasible if these issues are not resolved. While recognising the seriousness of these differences, we agreed that a further effort should be undertaken by our negotiating teams to assess whether they can be resolved. We are therefore instructing our chief negotiators to reconvene tomorrow in Brussels. We will speak again on Monday evening.”

Frost went to Brussels Sunday morning. The negotiation resumed that afternoon and went on for more than ten hours, until midnight, and continued all day yesterday, interrupted only by Barnier’s briefings for the EU ambassadors and for members of the European Parliament. In his briefings, Barnier told the ambassadors and MEPs that, despite rumors to the contrary, the ten hours of talks on Sunday had not resulted in a breakthrough in regard to either the issue of maintaining access to UK waters for EU fishermen and women or the issue of maintaining a level playing field for British and European firms in regard to state subsidies and labor, health and environmental standards.

Barnier also told the MEPs, who are understandably anxious, given that they will be expected to review and approve an agreement, if there is one, so it can take effect at midnight December 31, that the deadline for reaching agreement on the outstanding issues is tomorrow. There is, of course, another reason, in addition to the growing anxiety among the MEPs that they won’t have sufficient time to review an agreement in the way it should be reviewed if they have to approve it before 2021, why the deadline for reaching agreement on the outstanding issues is tomorrow or, at the latest, Thursday: The 27 leaders of the EU member states will meet as the European Council on Thursday, and several of them—most notably, French President Emmanuel Macron, who has adamantly insisted that French fishermen and women retain the access they now have to the UK’s coastal waters—have made it clear they want to see the terms of any agreement before the EU announces there is one.

Yesterday, von der Leyen and Johnson spoke again by phone for more than an hour, after which they issued a joint statement: “As agreed on Saturday, we took stock today of the ongoing negotiations. We agreed that the conditions for finalising an agreement are not there due to the remaining significant differences on three critical issues: level playing field, governance and fisheries. We asked our Chief Negotiators and their teams to prepare an overview of the remaining differences to be discussed in a physical meeting in Brussels in the coming days.” Barnier and Frost met this morning to draw up a list of the outstanding differences and an agenda for the von der Leyen-Johnson meeting. Barnier also briefed the EU ambassadors today on the current state of play in the negotiation, after which he tweeted, “Briefed all Member States at the General Affairs Council today. Full unity. We will never sacrifice our future for the present. Access to our market comes with conditions. Working closely with David Frost and team to prepare upcoming meeting between President von der Leyen and Prime Minister Johnson.” Frost is returning to London to brief Johnson on the agenda for his meeting with von der Leyen.

Today, speaking to the press, Johnson said, “You’ve got to be optimistic, you’ve got to believe there’s the power of sweet reason to get this thing over the line. But I’ve got to tell you it’s looking very, very difficult at the moment. We’ll do our level best, but I would just say to everybody—be in good cheer, there are great options ahead for our country on any view.” Asked if he would try to get an agreement up to the last minute, he said, “Yeah, of course. We’re always hopeful but you know there may come a moment when we have to acknowledge that it’s time to draw stumps and that’s just the way it is.” (‘Draw stumps’ is a cricket term, meaning ending play for the day.) Continuing, Johnson said, “We will see where we get to in the course of the next two days, but I think the UK government’s position is that we are willing to engage at any level, political or otherwise, we are willing to try anything. But there are just limits beyond which no sensible, independent government or country could go and people have got to understand that.” His spokesman later said, “The prime minister recognises that we have probably taken technical talks as far as they can….The in-person meeting will be to see if there is a political way through.” The spokesman also said the cabinet had met this morning and agreed that “We obviously want to continue to try to reach a free trade agreement….But the cabinet also agrees that any agreement must respect our sovereignty and allow us to take back control of our money, laws and borders.”

Late this afternoon, Frost tweeted, “Prime Minister Johnson will travel to Brussels tomorrow, 9 December, for dinner with European Commission President von der Leyen to continue our discussions on the future relationship between the UK and the EU.”

Will there be an agreement? Or failing that, will the talks continue? We’ll soon find out.