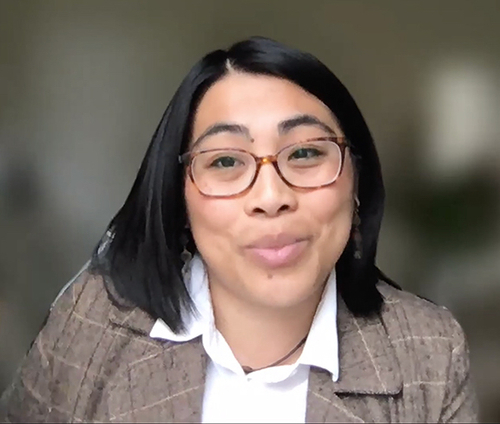 On May 6, the Gilder Lehrman Center for the Study of Slavery, Resistance, and Abolition at the MacMillan Center at Yale hosted a panel discussion titled “Learning from Lived Experience: Survivor Knowledge from the Holocaust, Antebellum Slavery, and Contemporary Slavery.” The webinar was co-sponsored by the Fortunoff Video Archive for Holocaust Testimonies at Yale and the Rights Lab at the University of Nottingham, UK. The program featured a keynote presentation by Minh Dang, a Research Fellow at Rights Lab who recently completed a doctoral thesis in Politics and Contemporary History at the University of Nottingham, entitled “Wellbeing in Our Own Words: Survivors of Slavery Defining Wellbeing.” (View Discussion)

Dr. Dang’s talk was followed by presentations by David W. Blight, Sterling Professor of History and Director of the Gilder Lehrman Center; Timothy Snyder, Levin Professor of History at Yale; and Andrea Nicholson, Research Fellow in Survivor Voices at the Rights Lab and School of Politics & International Relations at the University of Nottingham. Introductory remarks were made by Stephen Naron, Director of the Fortunoff Video Archive for Holocaust Testimonies and Luis C.deBaca, Gilder Lehrman Center Senior Fellow in Modern Slavery at the MacMillan Center at Yale and former Ambassador at Large to Monitor and Combat Trafficking in Persons during the Obama Administration. The panel was moderated by Amb. C.deBaca. Zoe Trodd, Director of the Rights Lab, gave closing remarks. Over 150 people joined the webinar from fifteen countries and thirty-two universities, research and policy centers, and advocacy organizations.

In this panel discussion, scholars of antebellum slavery, the Holocaust, and modern slavery responded to Minh Dang’s working paper, “Epistemology of Survival.” In this paper, Dr. Dang observes that most scholars of historical and modern slavery have not experienced the specific abuses that they study. She offers the provocative insight that this lack of survivor-researchers and even survivor-participants has had a limiting effect on slavery scholarship. Survivors of historical and modern slavery do not simply have different experiences than non-survivors, Dr. Dang argues. They also “know and understand freedom differently” because of those experiences. Appreciating how survivors understand slavery and freedom, she concludes, is essential both to supporting their journeys to full freedom and to grasping their insights – which, in turn, are essential to robust research in these fields. Responding to the paper, Dr. Dang and the panelists discussed the distorting effects of “freedom bias,” pondered the role of non-survivor scholars as aggregators and analyzers of survivors’ stories, and considered how best to involve survivors deliberatively, ethically, and sensitively in research efforts.

After introductory remarks by Amb. C.deBaca and Stephen Naron, Dr. Dang explained how in conversations with other survivors, she has often encountered the idea that they “know” slavery differently from non-survivors because their knowledge comes from their lived experiences. She observed that survivors’ knowledge construction is colored by the fact that, for an enslaved person, the purpose of knowledge is not to seek truth but rather to survive. Someone enslaved might unconsciously distort her views about herself or others in order to maintain her sense of control or diminish her feelings of fear. “In these situations of life-threatening danger, survivors’ knowledge … [might be] based on what we would consider falsehoods.” To adopt other truth-seeking epistemologies recognized by the academy and the free world, survivors have to challenge the very epistemology that helped them survive enslavement.

Dr. Dang suggested that this disconnect has created a “freedom bias” in anti-slavery research and efforts that prioritizes rescuing individuals from slavery but fails to support survivors in their return to what Frederick Douglass called “full freedom.” Even after survivors exit enslavement, they often lack access to resources necessary for trauma recovery. Without these resources, Dr. Dang argued, they cannot move beyond the epistemology of survival and begin to pursue research or explain their lived experiences without distortions generated by trauma. Thus, for academic purposes, currently “our information…about slavery is not from survivors of slavery.” To incorporate survivor voices and survivor leadership into anti-slavery research in a more robust way, Dr. Dang posited, we must make serious efforts to support survivors through the trauma recovery process.

In response, Professor Blight presented an antebellum slave narrative that vividly captured the distance between an “escape from enslavement” and the “full freedom” Dr. Dang and Douglass envisioned. William Grimes was the first American-born author of a slave narrative, writing in 1825, well before the genre of the slave narrative had taken shape. His account lacks many of the genre’s later hallmarks—most notably, white benefactors and a redemption arc. Grimes was born in Virginia, and eventually sold down to Savannah. After multiple attempts, he finally escaped to New York in 1815 and, after various run-ins with the law in New England, landed in New Haven. In 1823, his former owner found him and demanded that he return South or pay $500. The payment broke Grimes financially, and he wrote his narrative at the age of 40 while virtually homeless. As Professor Blight described it, the account is “full of candor and it is a touch profane…and it’s an extraordinarily angry, hurt, wounded voice” talking about the physical deprivations of his post-enslavement survival. Grimes ends his account by urging that upon his death, his scarred skin be made into parchment to bind the Constitution of “glorious, happy, free America”—vividly capturing the horrible irony of slavery in a republic and the empty promise of freedom America had offered him.

Professor Snyder entered the conversation from a different angle, observing how familiar Dr. Dang’s observations about the importance of survivor voices felt to his experience studying the Holocaust. He noted that in the late 1980s, German scholars of the Holocaust had largely reached consensus, and their disputes were limited to arguments over the correct interpretation of specific German sources. A young historian—and Holocaust survivor himself—named Saul Friedlander objected that this consensus could not be correct because it had ignored Jewish accounts: it lacked, as Professor Snyder phrased it, “the voices of the people who actually pass[ed] through” the horrors. And in fact, as Professor Snyder observed, “basically everything we thought about the Holocaust back then has turned out not to be correct,” based on survivor sources.

Drawing from this chapter of Holocaust historiography, Professor Snyder interrogated the roles of survivors and non-survivor academics. Stressing the importance of scholarly analysis across sources, Professor Snyder suggested that survivors often “don’t know what they don’t know” because “what [survivors] know, or how it harmonizes with what other survivors know is only clear when we have the voices of dozens or hundreds or ideally thousands.” He presented the role of the scholar and the survivor as a partnership in knowledge production, where one survivor’s account might be used by a scholar to elucidate another’s. He ended with the observation that his scholarly account of “rescuers” in the Holocaust was only possible because the aggregation of more than ten thousand accounts could break through the epistemic problem that actual rescuers “generally did so without any kind of glamour or fanfare.” Only a wholistic analysis of survivors’ disparate testimony “allows us to see that particular phenomenon” and understand an otherwise impenetrable element of Holocaust history.

In response, Andrea Nicholson offered her experience collaborating in research with survivors of modern slavery. She noted that “as a non-survivor researcher I can’t hope to comprehend what survivors’ realities mean for anti-slavery efforts without the inclusion and consideration of survivor voice.” However, to achieve that outcome, “those of us who are non-survivors must take responsibility to attend to and make space for survivor perspectives.” Often, she noted, freedom and enslavement are not neatly divided in those accounts. She invoked the narrative of a survivor named Duane, who was born into slavery in Nigeria and brought to France and then the U.K. Duane escaped his enslavement as a teenager, but even decades later at the time of his interview, he did not feel full freedom because he lacked the stability and official acknowledgement of citizenship. Though he was no longer enslaved, he felt abandoned, regularly homeless and destitute. For him, the boundary between freedom and slavery was “illusory,” Dr. Nicholson explained. For survivors like Duane, Dr. Nicholson concluded, Dr. Dang’s observations about the epistemology of survivors “raises important considerations for…what might be needed to realize full freedom.”

In conclusion, Dr. Dang posited that one role of non-survivor scholars might be to invite survivors to explore and articulate what they do and don’t know about themselves. She suggested that “survivors, if anybody, can get close” to explaining, as Douglass despaired, “the pain [of slavery] on my soul.” Helping survivors articulate their experiences and engage in scholarship themselves, she offered, “will allow people to get just a little bit closer into the empathy” required to truly understand slavery. And, crucially, it might help non-survivors confront what they too “don’t know they don’t know.”