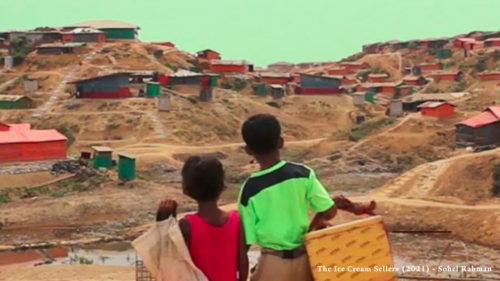 Written by Daevan Mangalmurti, a junior in Ethics, Politics and Economics and South Asian Studies major in Yale College

On Monday, September 12, 2022, the Program on Refugees, Forced Displacement, and Humanitarian Resources (PRFDHR) hosted a virtual Q&A with director Sohel Rahman on his critically praised film The Ice Cream Sellers (2021). Filmed over a few months in the summer of 2017, The Ice Cream Sellers is the powerful story of the Rohingya people, called the “the most persecuted minority in the world” by former United Nations High Commissioner for Human Rights Zeid Ra’ad Al Hussein. In the film, Rahman follows the daily journey of two siblings, ten-year-old Ayas and eight-year-old Asia, selling ice cream across the barren, dusty landscape of Bangladesh’s Kutupalong refugee camp to earn some money to free their father from prison in Myanmar.

The Q&A and concurrent screening of The Ice Cream Sellers by the PRFDHR commemorated five years since the beginning of the Rohingya latest violent persecution in August 2017. Over a million Rohingya have been forcibly displaced from Myanmar’s Rakhine State since 2017, most of them to Bangladesh. In 2020, the International Court of Justice ordered Myanmar to take necessary steps to protect the Rohingya from genocide, a ruling with which Myanmar has not complied. In July 2022, the Court ruled that a case filed by The Gambia against Myanmar to protect the Rohingya could proceed, over Myanmar’s objections.

In a conversation with Neela Saldanha, Executive Director of the Yale Research Initiative on Innovation and Scale (Y-RISE), Rahman talked about the process of making the film, his own emotional and personal journey, and what the future might look like for Rohingya refugees.

When news of the genocide began to reach the world outside Myanmar, Rahman remembers seeing a photo of a woman with two children fleeing the Burmese military, the main perpetrators of the genocide, and thinking of his own mother. “I felt like, ‘Okay, I have to do something as a human, as a filmmaker’. So I flew from Lisbon to Chittagong, and I went to that refugee camp, and I started filming. First of all, I was a little bit lost, because it was too much for someone to endure all that’s happening, all the suffering. You see the people, wounded people, women, and it is a crime.” Rahman remembers speaking to refugees who “were describing a killing like they were talking about breakfast, like they [were] talking about usual things.”

Horrified by his experience and cognizant of his own connection to the refugees, whose language he speaks, Rahman felt compelled to start filming. But, he says, “I didn’t want to make a conventional refugee film. I saw everywhere children, children, children… trying to create their own childhood wherever they are. [I thought] maybe it would be nice to have the perspective of the post-genocide period through the eyes of children. Because those children - they are hope, they are dreams. They are the power for this community.” Having decided to focus on children, Rahman had a chance encounter with the titular ice cream sellers and began following them around the camp - just himself and a small camera with a microphone. Reflecting on the symbolism of the ice cream, he described it as metaphorically “giving [refugees] peace in that burning fire” of the scorching heat of the refugee camp, which stretches for miles with little water and no trees.

Throughout the process of filming, Rahman experienced many moments that shook him, including one encounter with a bereaved mother who thought he looked like her murdered son. “It was very heartbreaking. I couldn’t really control even my camera. I was asking myself, ‘Should I roll my camera, or should I just give her a hug?’ But there is a cultural problem: you cannot hug a woman like that in that corner of the world.” During filming, Rahman tried to balance sharing the refugees’ pain with the audience with a desire to treat those whose stories he was telling with compassion and respect. Describing a filmmaker’s responsibility to both audience and subjects, Rahman talked about certain times when he avoided putting content in the film because it was “too harsh for the international audience.” “I could put all kinds of injuries and more suffering, more things. [The Ice Cream Sellers] would not be accepted as it is now. It would not touch a big community.” Instead, he said, viewers would think “this filmmaker is just trying to make me sad.” The film is already deeply affecting. “In France,” Rahman said, “I screened the film and some people had to leave because they couldn’t continue, because it was too much for them.”

Reflecting on one particularly painful moment in the film when a vegetable seller cannot find the money to buy a balloon for his children, both Rahman and Saldanha talked about the strange dynamics of happiness and suffering that exist in the refugees’ limbo. “How can you really deny whatever little happiness you get when life is uncertain?” Saldanha asked.

Rahman emphasized that the Rohingya remain resilient. “They are a group of people with a past, with honor, with culture, and now they’ve lost everything, and they are still saying that… we have to feel like we are on holiday [and stay strong].” But they have few options in Bangladesh, where they cannot work in most cases and education is restricted. Rahman said, “If you’re not providing education, if you’re not providing any basic human rights, and everything is getting smaller, worse, then they’ll get more desperate, and they will be used by criminals, for example… it’s a regional threat for India, for Myanmar, for Thailand or other countries who are sharing the same area.” While most refugees who appear in the film talk about a desire to return to their homes in Myanmar, conditions there remain fundamentally unsafe. The dichotomy between exile and home, Rahman said, was summarized by people talking about dying in the camp and saying, “We prefer to get buried with a funeral rather than just going [to Myanmar] and getting killed. If we stay here, we get a funeral.”

As the Q&A neared its end, Saldanha asked “What’s the expectation of what centers of learning like Yale and universities can actually do in this giant problem?” Rahman stressed the importance of conversations like the Q&A. “If they talk about it, it means a lot. For example, right now there are people engaging. We are talking. It’s already a lot for one of the most persecuted communities in the world, and the international community has forgotten about them… I’m really grateful and thankful to you, to the university that invited me and screened my film, for the audience, for the academic world. And I think it has a significant impact for making awareness. Also, it’s for the future. People will know. That will help to prevent another genocide in another corner of the world.”

Offering her final thoughts on the film, Saldanha reflected on the importance of how stories are told and who tells them. “We need to have somebody who has experience in these situations. I think, if we just go in as researchers or filmmakers who don’t know anything about the situation or have never worked in similar situations, we are likely to cause more harm than do good, so I think it’s worth it for us to actually think about that. The stories that Sohel and other filmmakers tell are just as valuable as the kind of hard data or quantitative data that we might do as an academic research center. You want to know people. You’ve got to show them not just the numbers, but also the stories of people’s lives. So, I think this is fantastic.”