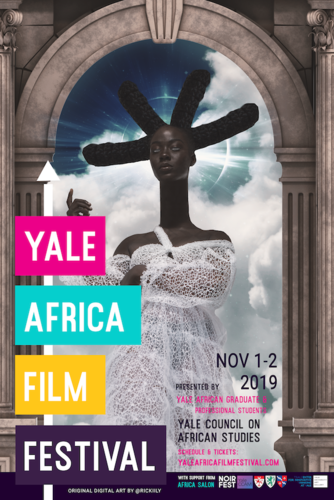 Complete with question and answer sessions, a networking cocktail event and more, the second annual Yale Africa Film Festival will showcase films of Africa and its diaspora this weekend.

Organized by the Council on African Studies and the Yale African Graduate & Professional Students, the festival will take place from Nov. 1 to 2. It will include film screenings, director Q&As, a panel discussion and a networking cocktail party. The festival aims to expand perspectives on Africa on campus and amplify positive imagery of Africa.

“The festival will foster a greater appreciation for the glory, diversity and the variegated nature of blackness globally,” said founder Lolade Siyonbola GRD ’19.

According to Siyonbola, the films were selected from around 500 original submissions after several rounds of elimination. The festival has grown in size from last year, when only 57 films were submitted to the committee.

Norah Langat, program coordinator for the MacMillan Center Council on African Studies, explained that the selection committee wanted to showcase films that include the use of African languages, honor the cultural histories of the locations where they were shot and “strive to reframe African experiences and identities with new stories and narratives.” Langat added that the festival allows people interested in African studies to engage with African stories through art.

Siyonbola said that she is especially excited about the “eclectic mix” of films that will be screened in the festival this year.

“I feel like we raised the bar this year,” Siyonbola said. “Hopefully that will continue to happen over the years. The films will get better and better.”

Joan Agoh ’21, a member of the festival’s planning team, said that the festival is a reminder that knowledge production doesn’t only happen at institutions like Yale, and that Yale has a lot to learn from voices beyond its campus.

Siyonbola said that the festival allows for important dialogue between filmmakers and audience members.

Agoh, who also worked on the festival last year, said that seeing people from the greater New Haven area engage in the festival was special. The festival attracted attendees who might have a fraught relationship with Yale, or otherwise might have never seen the films on view, Agoh said.

“Just getting all these perspectives in a room is really powerful,” Agoh said.

This year, the festival will implement a survey technology supported by NOIR FEST, a film tech startup founded by Siyonbola and other team members. At the end of each screening, audience members will be able to submit anonymous ratings of the films’ cinematography, storytelling and acting. According to Siyonbola, the data will be useful for the filmmakers in the long term, and allow for a “more granular and detailed and documented” interaction between viewers and filmmakers.

On Nov. 2, artists and scholars will participate in the panel “Film, Art and African Development,” which will explore the role of film in Africa’s sustainable development. According to Agoh, the panel allows art to engage with politics and help reimagine the future of development.

“I really believe that film shapes behaviors as well as perceptions,” Siyonbola said. “I want us to talk about how we can use media to change the world and to spur social change.”

The festival will also include the digital art exhibit “Black Glory: Once Upon a Future,” which will be on display at the Center for Collaborative Arts and Media from Nov. 1 to 30 through a partnership with Noir Fest. The exhibit, curated by Siyonbola, showcases Afrofuturist art by digital artists. According to the festival’s press release, these artists are “at the forefront of an artistic movement which has been likened to Cubism.”

Agoh said that the films encourage viewers to “deconstruct the invention of Africa” and reflect upon how the complex nature of African and African diasporic narratives offer liberating possibilities.

“There is no single story, and we all have a task of imagining a future that accounts for all of our differences,” Agoh said.

All events are free and open to the public.