Through the Eyes of She: Equity in Health, Education, Business and Leadership for the African Woman in the 21st Century 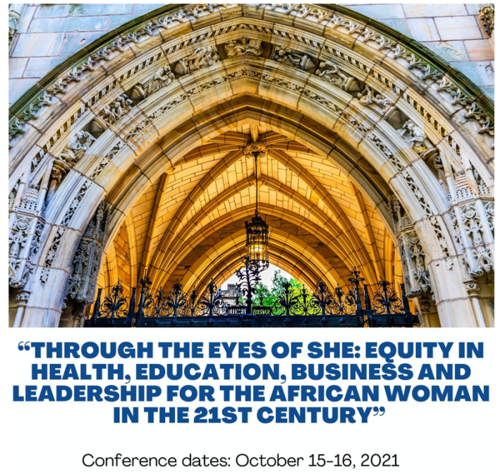 Christine Ngaruiya, MD, MSc, DTM&H, is Assistant Professor in the Department of Emergency Medicine at Yale School of Medicine. She is a co-founding member of the Yale Network for Global Non-Communicable Disease and a 2020 WomenLift Health Women Leaders in Global Health Leadership Fellow. She is the Chair of the Organizing Committee for the upcoming conference , ‘Through the Eyes of She: Equity in Health, Education, Business and Leadership for the African Woman in the 21st Century.’

First, would you introduce yourself and tell us a bit about your work?

My name is Christine Ngaruiya, and I’m on faculty in the Department of Emergency Medicine at the Yale School of Medicine. I’m an assistant professor with a primary focus on research on the African continent – in Kenya, and my research focuses on chronic noncommunicable diseases in that setting. I’ve lived in the US as an adult, but I was raised in Kenya, in East Africa, where I was exposed early on to disparities across different domains. This went on to influence my focus on disparities in my coursework and my research as I’ve gone on in my academic career. Most recently I’ve honed in more so on gender disparities as far as they pertain to health, but I’ve also become very engaged in thinking through gender equity in other domains, including leadership and the leadership development pipeline, particularly in Africa, but in low and middle income countries in general.

You’ve organized the upcoming conference, “In the Eyes of She: Equity in Health, Education, Business and Leadership for the African Woman in the 21st Century.” What inspired you to put together this event?

Through my academic career, my research partnerships, and my mentorship activities back in my home country of Kenya, I’ve seen so many ways in which gender equity is either not being implemented or, if it is being implemented, not being implemented effectively enough to see a persistent reduction in disparities. That means parity in education for women, research advancement for women –  including trainees – and even securing successful publications, grants, and promotion in the field.

And this bothers me; it’s something that I saw growing up and that I continue to experience alongside my peers as an African diasporan woman living in the US. It’s something that is very near and dear to my heart for both personal and professional reasons. If we are not mindful about gender disparity, we’ll continue to have it. We’ll continue to perpetuate it unless we make targeted actions, both system-wide and at the individual level. We hear from the World Economic Forum that it’s going to take more than a hundred years to even reach economic parity for women in the world, which is dire. But I feel strongly that if we all are able to pull our brains and resources together across sectors, as is demonstrated in the conference, then we can continue to help toward closing this gap.

Obviously at Yale, we have a wide variety of experts, projects, and resources across our system that work in Africa or with African partners. I thought the conference would be an opportunity to really help engage those that are already working on the continent at Yale, either by thinking through their own work with a gendered lens, or by introducing those who might be interested in gender equity but have not as yet engaged with it in their work. We also wanted to spotlight some of the amazing work that’s happening on the continent, again, with a gendered lens.  Lastly, we wanted to create new networks, new opportunities for partnerships, and new opportunities for education that will hopefully only grow our Yale community.

Sounds fantastic! Could you tell us a little bit more about who will be featured at the conference and what topics you expect will be discussed?

The conference is clustered around the four themes – health, education, business, and leadership – with naturally some bleeding in between themes. I was really excited to see the diversity of thought and the real insight with regards to the type of submissions that we received for the diverse presentations. In terms of these broad categories, we have representation across the board from the pipeline in education, starting from young girls in Kenyan schools, all the way up to and including fashion and the media in terms of business and development. Importantly, some discussion will touch on the African diaspora more broadly, which includes those that were potentially Africa-based or first-generation immigrants and Black people in America and how they represent a form of the diaspora. In sum, what does equity mean for development of the “African woman” more generally in the 21st century?

It’s really exciting honestly, to see how the individual submissions have come together in terms of a real plethora of experience. And I’m thrilled for the audience to come engage with it as well. Naturally we will also have a couple of significant keynotes who are well-respected leaders on the continent as well as key individuals across Yale’s campus that will be giving some welcoming remarks and closing out our events on both days. We will use a couple of sessions to really have some meaningful agenda setting discussions. I think many of us are aware of the problems that exist, so the goal is not to solely identify or highlight problems, but also to come away with some action points and agenda items. We’ve tried to incorporate that in meaningful ways also throughout the conference.

Achieving gender equality and empowerment of all women and girls as one of the United Nations, sustainable development goals. How do we get there? Where do you see this conversation going?

This needs to occur at multiple levels. First of all, the Sustainable Development Goals are unprecedented in their nature except for the MDGs that were the first iteration of their kind. Thankfully the SDGs further expanded on goal or targets and indicators related to gender and equity. That in and of itself is a benchmark in helping governments to think about women and gender equality in a more strategic way. I also think that action needs to occur at all levels of the system as it were, and that includes academia. To that end, I believe this is where Yale as an institution comes in, because academics and universities have a lot of power as far as driving discussions around priorities for a given country and contributing to policy decisions that occur with regards to certain issues.

So I was keen to bring Yale, a leading academic institution, to the table in this discussion and to bring other stakeholders around the world and in Africa, in particular, to have this discussion with us at this juncture in time. While we will certainly have other sectors represented as well –  and I cannot overemphasize the importance of operating outside of silos – I’m very keen to see the discussion we will have from a primarily academic lens.

This brings me into my next question. What’s your message for young African women at Yale who are students or junior scholars?

If I had one phrase to share with them, I would say Be The Change. That just means in all aspects, be the best that you can be, at whatever you’re studying and whatever you plan to go on to do to affect change in the world, whatever sector you work on. If and when you do become leaders, make sure that you appoint equitably across domains, including gender, and make sure that you mentor and pull up those behind you in a meaningful and consistent way. Make sure that you educate as you go along about the disparities and barriers for those that are from traditionally disadvantaged populations, including inequity for women. And just remember that some of us who’ve walked a few feet ahead in the steps that you will soon come to – we are willing and able to help, and don’t be afraid to reach out.

What should we make of this conference title, “Through the Eyes of She”? Why have you chosen that as the title?

This is funny, but I did not realize until after the title was decided that there’s actually a song that is called “Through the Eyes of She”. So I don’t have any copyright of that, but I think it is a bold statement highlighting where the gender power lies and where it doesn’t. And the idea is that again, as far as SDG outlines, in many measures women’s still continue to lag, including the four themes of our conference. So let us all reflect in our own work, which we probably go about in a sort of mundane fashion sometimes as it pertains to gender equity, and really think how we can ensure that we are being mindful of gender in all aspects. For the academic, that looks like your classrooms – facilitating equal representation and providing space for women –  and for researchers, how are we thinking about recruitment in our studies and ensuring that we’re being equitable in our reporting of outcomes and highlighting gender disparities appropriately. It was really just to pause and help us think through what the status quo is and what we can do in particular to help level the playing field.

I’ll just add that this is obviously only a starting point – a drop in the bucket as it were. There are many more initiatives that need to occur to realize change in this area. I hope that this conference will act as a launching point, both for those in the Yale community and the attendees that are able to participate, in terms of thinking how they can then go out in their own respective fields and institutions to effect change more systematically and broadly themselves.

This conference is being organized in concert with Yale Conferences and Events. Anyone can register (Through the Eyes of She) to attend and registration is free. Registration will remain open until Wednesday, October 13th 2021. The conference schedule will be shared with registered participants prior to the event. Funding is provided by: The Edward J. and Dorothy Clarke Kempf Memorial Fund; Hakeem and Myma Belo-Osagie Provost’s Fund for the Promotion of Africa; Yale Office of International Affairs; Yale Council on African Studies; Department of Pediatrics Global Health Program; Yale Institute for Global Health, and the Women’s Faculty Forum.