Trump Is Trying to Kill the Program That Saved My Life 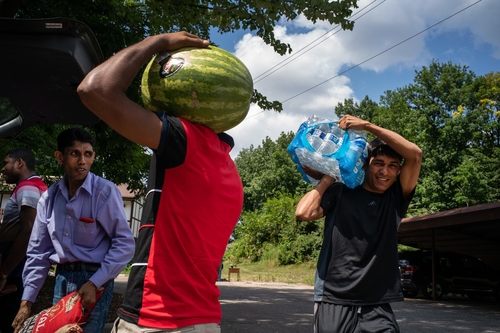 The following opinion piece written by Marius Kothor,  a Ph.D. student in history and a graduate afilliate with the Council on African Studies, appeared in the October 2 issue of The New York Times.

The sea-washed, sunset gates of the United States are being closed to the huddled masses yearning to breathe free. President Trump and his administration have slashed the Refugee Resettlement Program, which allows people fleeing war, persecution and famine to legally move to the United States.

On Thursday, the administration announced that it would accept only 18,000 refugees during the next 12 months, a stark reduction from the already low current limit of 30,000. By comparison, roughly 85,000 refugees were resettled in 2016 under the Obama administration.

The administration has justified the move by claiming the need to focus its energy on the humanitarian and security crisis along the southern border and on the backlogged immigration cases in American courts. Earlier, a Trump administration official had claimed that refugees pose “enormous security challenges” to the country. But coming to the United States as a refugee is the most difficult way to enter this country, because refugees go through a very thorough vetting process.

I know this because it took my family seven years to be approved for refugee resettlement in the United States after we had to flee political strife in the West African country of Togo. During those seven long years, I lost two brothers to disease and malnutrition. I became ill and bedridden but fought to survive because I did not want my mother to cry again the way she had cried when my brothers died.

Our problems began in 1993 when Eyadema Gnassingbé, then the president of Togo, started a campaign of political violence and intimidation to crush popular demands for democratic elections and free speech.

My father, a soldier in the Togolese army, was forced to watch the execution of 14 of his colleagues in Lomé, the capital. Mr. Gnassingbé ordered the executions to punish soldiers he believed supported democratic reforms and to terrorize others into complete obedience. My father feared that he would eventually be asked to prove his loyalty by participating in these murders. He fled to Benin, bordering Togo in the east.

For weeks, my mother was unable to locate my father. She took my brothers and me across Togo’s western border to her maternal homeland in Ghana. Several months later, we found out that my father had made it to Benin. We traveled back through Togo to join him.

We applied for political asylum in a refugee camp the United Nations set up in Benin to assist the thousands fleeing Togo. We lived in various refugee camps, battling disease, malnutrition and the constant fear of being found out. We mostly ate a meal of water and corn flour with a soup made of palm oil and salt. We could not afford seasonings or vegetables.

Apart from the constant food insecurity, we had to hide our real identities; we could never reveal that our father had been a soldier in the Togolese military. There were men looking for him. Every time we saw strangers in our neighborhood, we panicked because we feared they had come for our father.

After six years, in 1999, we were selected by the State Department to interview in Cotonou, Benin’s largest city, for resettlement. We could not afford the fare to get there. My parents sold all our belongings to get the money for the journey. Once there, we relocated to another refugee camp and went through several rounds of interviews with American and United Nations agencies, repeatedly recounting why we fled Togo and why we could not go back.

After the State Department determined that my parents were telling the truth and our situation was dire, we went through background and health checks before it finally approved us for resettlement. We were lucky: Only 1 percent of the millions of refugees around the world will ever receive a lifeline like the one we received.

On a bitter cold February morning in 2000, we arrived in upstate New York. The new beginning was difficult. Learning a new language and adjusting to American culture and customs proved demanding. With limited English language skills, my parents struggled to find work that could support our family.

I was 9. I had never been to school, could neither read nor write and spoke no English. An amazing group of committed teachers helped. It took me three years to learn to read and write.

I went to a great public school with teachers and guidance counselors who encouraged my curiosity and taught me that it was fine to ask for things like extended time on exams and after-school tutoring.

Now I am a graduate student at Yale, working on a Ph.D. in history, working toward being a historian, motivated by my desire to understand how a country like Togo came to be such a politically unstable place.

The refugee resettlement program is why I am alive today and able to dream of becoming a historian. Drastically reducing the number of refugees allowed to resettle in America will leave thousands of vulnerable people trapped in horrendous situations like what my family endured.

There are few places in the world where stories like mine are possible. We are alive and thriving because of a remarkable program that helped my family escape political persecution and allowed us to build a new life here — and showed us the best of America, a country we are proud to call home.