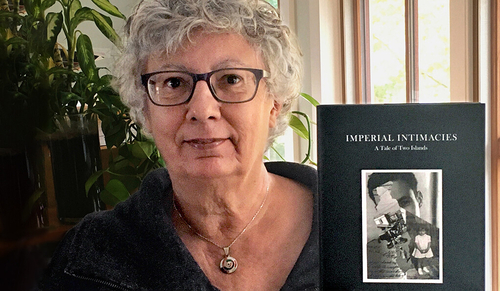 For Yale scholar Hazel Carby, one of the gratifications of winning the British Academy’s Nayef Al-Rodhan Prize for Global Cultural Understanding is that this year’s honor recognizes the importance of work in ethnic and racial studies, which has previously been “marginalized,” she said.

It also happens to be work that, for Carby, is very personal. The prize, announced Oct. 27, was awarded to her book “Imperial Intimacies: A Tale of Two Islands,” which weaves her family’s history into the wider history of Britain and Jamaica under the British Empire.

Carby, the daughter of a white Welsh mother and a Black Jamaican father, grew up in England, in South London. She said she chose to combine her family’s history with historical scholarship on the relationship between “the two islands” during British colonialism because she wanted to write in a format that would be “accessible to a broad audience.”

“I wanted to tell a story that showed how the lives of ordinary people on both islands became entangled,” said Carby, the Charles C. & Dorathea S. Dilley Professor Emeritus of African American Studies and American Studies in the Faculty of Arts & Sciences.

In the book, she shares one story about an elementary school teacher who accused her of lying when she mentioned that her father was an airman in the Royal Air Force. The teacher claimed that there were no Black people serving in that elite force during World War II. “My book addresses a series of historical amnesias about empire, about enslavement, and about British racism,” she said.

The Nayef Al-Rodhan Prize was established in 2013 to reward and celebrate the best works of nonfiction “that demonstrate rigor and originality, have contributed to global cultural understanding, and illuminate the interconnections and divisions that shape cultural identity worldwide.”

The jury was impressed with Carby’s ability to combine in an original way a highly personal story with the rigorous academic study.

“This is a beautifully achieved demonstration of what can happen when a child of a mixed-race family takes her memories of growing up in post-war England and Wales and treats them as the basis for an exploration of the history that made that experience and continued to weigh so heavily upon everyone involved,” said Patrick Wright, emeritus professor of literature and history at King’s College and a fellow of the British Academy.

“‘Imperial Intimacies’ reveals so much that should be remembered about the British Empire: the extent to which it shaped Britain and its attitudes, it cruelties, and the opportunities it offered even to poor Britons looking to improve their situations at the expense of their slaves or indentured workers,” he continued. “It is exceptional both in the tenacity with which Carby builds up historical worlds to give reality to ancestors only remembered as names, and in the way she manages to convert pain into understanding without becoming reconciled to the attitudes and circumstances that cramped her parents lives and, to an extent, continue to exist in the present.”

Carby, a scholar in the fields of feminist literary studies and Black diaspora studies who taught at Yale for three decades, said that one of the challenges for her in writing the book was that at times her personal and professional selves were at odds with each other. For example, when she discovered in the UK National Archives registries of enslaved people in colonial Jamaica, she said “the researcher” in her “wanted to go down every avenue, follow every trail, and pick up every trace” to learn more about British enslavement. However, as a descendent of people who were slaves, she dreaded having to imagine the indignities these ancestors may have suffered.

“I try in the narrative structure of the book to capture that ambiguity and uncertainty,” said Carby. “There are some stories I had to tell from a distance, where I’d refer to myself as ‘the girl.’”

Her book was chosen from a shortlist of five books that included the Yale University Press-published “Lakota America: A New History of Indigenous Power” by Pekka Hämäläinen; “Insurgent Empire — Anticolonial Resistance and British Dissent” by Priyamvada Gopal (Verso); “The Reinvention of Humanity: A Story of Race, Sex, Gender, and the Discovery of Culture” by Charles King (The Bodley Head); and “All our Relations: Indigenous Trauma in the Shadow of Colonialism” by Tanya Talaga (Scribe).

“It’s a visionary group of books that were shortlisted,” said Carby. “All of them think across national borders and try to forge innovative ways to re-conceptualize history. I feel honored to be among this great group. … I think this prize isn’t just rewarding me or an individual book; it’s actually rewarding and recognizing emerging works in indigenous studies, race and migration studies, and studies of ethnicity … that deal with pasts that have been silenced. This recognition un-silences them.”

Carby participated in a virtual award celebration and received personal congratulations from Nayef Al-Rodhan, a philosopher, neuroscientist, geostrategist, and head of the Geneva Centre for Security Policy’s Geopolitics and Global Futures Programme, who was a fellow in the Department of Neurosurgery at the Yale School of Medicine in the early 1990s.

“Imperial Intimacies” also was named one of the Books of the Year for 2019 by the Times Literary Supplement, was awarded Honorable Mention for the 2020 John Hope Franklin Publication Prize from the American Studies Association, and is on the shortlist for the PEN Hessell-Titman Prize for History, which will be announced at the end of November.