U.S. nuclear weapons in an age of emerging technologies 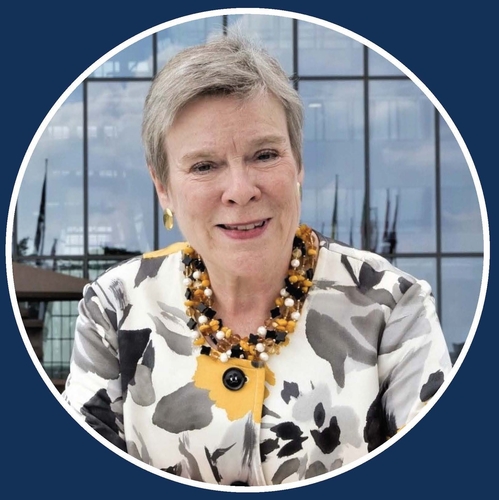 On April 15, the MacMillan Center hosted Rose Gottemoeller, the U.S. chief negotiator of the New START treaty—and the first woman to lead a major nuclear arms negotiation—to give the George Herbert Walker, Jr. Lecture Fund at Yale University on the subject of U.S. nuclear weapons in an age of emerging technologies. Gottemoeller is the Frank E. and Arthur W. Payne Distinguished Lecturer at Stanford University’s Freeman Spogli Institute for International Studies and its Center for International Security and Cooperation. She previously served as Deputy Secretary General of NATO from 2016 to 2019 and as Under Secretary for Arms Control and International Security at the U.S. Department of State. (View Lecture)

Gottemoeller’s talk began by contextualizing the development of American second-strike retaliatory nuclear forces. One of the hallmarks of modern nuclear deterrence, second-strike retaliatory capabilities function, Gottemoeller noted, as a kind of “insurance policy” in the rare case of a successful first strike attack. While American second-strike capabilities are largely centered around submarines, Gottemoeller noted, the Soviet and Chinese militaries have focused on building second-strike capabilities “mostly by building mobile missiles that are difficult to target because they keep moving and because they deploy in areas, such as the heavily forested taiga in Russia, where they can hide.”

“The ability to successfully retaliate, even after a devastating first nuclear strike,” Gottemoeller said, “has long been seen as the vital insurance policy and the cornerstone of strategic stability. Each side suspects the other of being on a long quest to undo the second-strike retaliatory capability of the other side.” Achieving such a goal would, Gottemoeller argued, “be one way to gain a decisive strategic advantage.”

After laying out this nuclear theory framework, Gottemoeller shifted to a discussion of what experts call Emerging and Disruptive Technologies, or EDTs. These technologies, which include developments in autonomous systems, cyberspace, remote sensing, and quantum computing, are “exciting, but also have everyone tied in knots,” Goettemoeller said. The technologies “worry the general public because they seem so whizzbang and yet unpredictable,” she said, adding that they also worry scientists, who fear that the leading edge of science and technology will move to other states or scientific institutions, as well as governments, who are concerned about falling behind peer states and facing unpredictable and novel military threats.

Gottemoeller argued that the growth and deployment of EDTs is not inherently good or bad, but rather presents a variety of both welcome and undesirable consequences. “There are positive aspects of each that we need to balance with their downsides,” she said. For example, AI facial recognition is currently being used by the South Korean government to conduct contact tracing efforts to keep Covid-19 under control, but is also being used by the Chinese government to stifle dissent in Hong Kong and Uyghur territories. “We need to pay attention to…getting the best out of the technology while mitigating the downside risks,” she concluded.

The professional consensus around EDTs echoes Gottemoeller’s ambivalence. “My literature review highlighted that we are living in the age of anxiety with regard to emerging and disruptive technologies,” she said. For both preemption and crisis management, some experts have hailed EDTs as having positive benefits, while others are less sanguine about the risks. “We are really grappling with a situation here in which experts do disagree about all of these technological developments,” Gottemoeller concluded.

“Believe me, I am faulting no one for these disparate assessments,” she added. “In some cases, it is simply too early to understand what the full effects of the technology will be. In others, we are already seeing steady applications of the technology…but are still working to understand their full implication.” That so many of these technologies are maturing at different rates “adds to the confusion about what kind of impact they will have.”

Gottemoeller concluded that “the implications of some Emerging and Disruptive Technologies are simply unknowable at the moment.” What we can do, she argued, is examine the specific EDTs which are already “beginning to have a decisive effect on the military capabilities that we have and hold today.” Returning to the subject of the beginning of her talk, Gottemoeller argued that “such a decisive effect is emerging with regard to the concealment of second-strike deterrent forces.”

Specifically, the growth of more ubiquitous earth imaging and sensing—along with AI tools and Big Data analysis—is beginning to erode the concealment of both Russian and Chinese mobile missiles and American submarines. With respect to American capabilities, Gottemoeller admitted that she had “tended to be skeptical that our adversaries could be capable of undoing that concealment, of rendering the seas transparent so that submarines become targetable.” Lately, however, she argued that the advent of quantum sensing leads her to wonder whether that goal might be achievable in the next 20 to 25 years.

“I believe that I am the first to argue that the disappearance of a second strike could occur within a similar period for the United States, Russia, and China, and indeed also for the United Kingdom and France,” Gottemoeller concluded. The result would be what Gottemoeller calls, referring to the title of her talk, the Standstill Conundrum: as the nuclear states compete and succeed in developing EDTs such as ubiquitous sensing, AI tools, and Big Data analysis, they will lose the survivability of their second-strike retaliatory forces at approximately the same time: in 20 or 25 years.

What will the consequences of the Standstill Conundrum be for strategic stability? Gottemoeller suggested that the mutual vulnerability generated by the nuclear powers simultaneously losing their second-strike capabilities could be stabilizing, as at that point the further expansion of nuclear forces would be fruitless and countries may decide it is no longer worth investing in new weapons. Yet the Standstill Conundrum could pose new proliferation risks, as a pause in the growth of the world’s largest nuclear forces might “tempt others to acquire nuclear weapons for smaller-scale uses.” These potential risks should “call forth a requirement to redouble efforts to stop nuclear proliferation in every form,” Gottemoeller said.

At the end of her remarks, Gottemoeller exhorted the audience to “think about 25 years hence, when Emerging and Disruptive Technologies, especially in the sensing arena, may begin to force challenges to what we have considered a stable nuclear force structure over the past seven decades.” Gottemoeller added that “if we, the United States, allow ourselves to be outpaced in the acquisition of advanced sensor technologies, then we will find ourselves in a severely destabilized situation, with our force structures vulnerable to targeting while others are not.” If the United States does keep pace and the nuclear powers end up at a “standstill moment,” Gottemoeller concluded, it will “make for some interesting policy work among nations.”

One of the MacMillan Center’s flagship events, the George Herbert Walker, Jr. Lecture Fund at Yale University was established in 1988 by Ambassador George Herbert Walker III in honor of his father. It is devoted to topics of international significance and given by major public figures and eminent scholars, such as Gottemoeller. The lecture was cosponsored by the MacMillan Center’s European Studies Council and the Program in Russian, East European, and Eurasian Studies.

Gottemoeller’s new book, Negotiating the New START Treaty, is due out in early May.