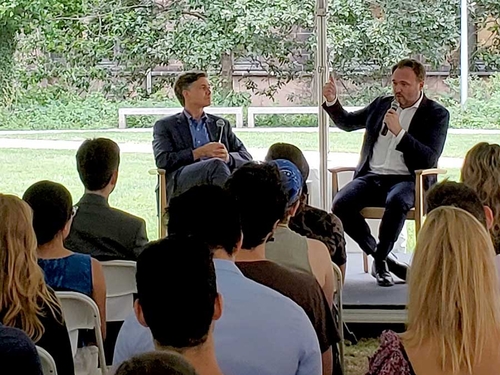 Friday, October 1, 2021
Despite a small carbon footprint, Denmark is an innovator in the environmental realm. Dan Jørgensen, the country’s minister for climate, energy, and utilities, recently visited Yale School of the Environment to explain why the country wants to be a leader in the global fight against climate change.
In just the past few decades, Denmark has been able to reduce their greenhouse gas emissions by half while also doubling the size of its economy over the same time period. Today, the country has been rated one of the happiest, healthiest, and wealthiest in the world.

And in the past year, Denmark pledged to cut emissions even further — 70% by 2030, compared to 1990 levels — while still maintaining generous social benefits.

All for a country of just under six million people and with a considerably small carbon footprint. Why?

“If Denmark disappeared tomorrow, the carbon reduction might not even register,” says Dan Jørgensen, Denmark’s minister for climate, energy and utilities, who visited campus on September 23 for a talk with Daniel Esty, Hillhouse Professor of Environmental Law and Policy. “So why do we spend so much time and resources on transforming ourselves? Because we want to be a frontrunner; we want to show the world that you can have a decarbonized economy that is wealthy and provides its people with a high quality of life.”

At the talk, which included a question-and-answer session with Yale students, Jørgensen focused on how Denmark has achieved significant decarbonization and how its strategies can potentially be replicated in the U.S.

Appointed to his role in 2019, Jørgensen has set an aggressive agenda for dealing with climate change. Last year, Denmark pledged to end oil and gas exploration by 2050, reinvesting those funds into retraining workers for jobs in greener technologies. More recently, the country announced the construction of an artificial island in the North Sea that would house an enormous wind farm, supplying energy and energy storage for Denmark and other neighboring countries.

Earlier this year, Jørgensen and U.S. Secretary of Energy Jennifer Granholm signed a Memorandum of Understanding that formalized collaboration in clean energy research and technology, with a particular focus on bolstering offshore wind power in the U.S.

During the conversation with Esty, Jørgensen explained that he has worked closely with different U.S. states on tackling potential obstacles to offshore wind power, including the fishing industry and the U.S. military. At a recent meeting with Sen. Joe Manchin of West Virginia — a state heavily reliant on the coal industry — Jørgensen said he was “able to agree on quite a bit, actually.”

“We want to help the U.S. learn from our mistakes [and] cut through the red tape,” says Jørgensen, who added that Denmark has significant financial interest in offshore wind power in the U.S., with roughly 40% of turbines owned by Danish companies.

Asked by Esty what a “just transition” to a greener economy looks like in the U.S., Jørgensen had a simple message for the emerging environmental leaders in the audience: “Take it seriously.”

“We will live in a better society when we make these changes. We need people to believe that,” he says. “If we talk to a coal miner, we can’t say, ‘Your job is bad, and you are ruining the planet.’ This is part of who they are, a major part of their culture. We need them to understand and believe that a transition [to clean energy] will make a difference.”

The discussion with Jørgensen was hosted by the Yale Center for Environmental Law and Policy and the Yale Environmental Dialogue, a YSE initiative spearheaded by Esty that aims to promote a sustainable future by injecting new energy and fresh thinking into the national conversation with the goal of identifying new solutions.