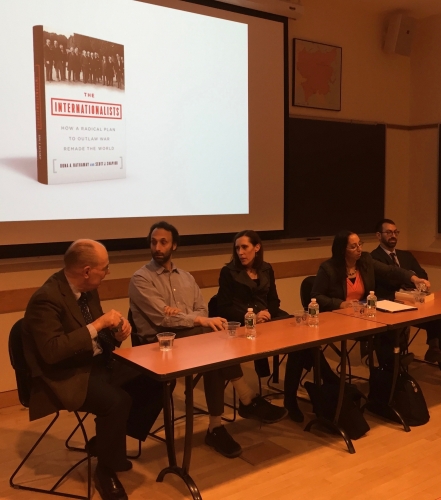 The Internationalists: How a Radical Plan to Outlaw War Remade the World (Simon & Schuster, 2017), a new book by Yale Law professors OonaHathaway, Gerard C. and Bernice Latrobe Smith Professor of International Law, and Scott J. Shapiro, Charles F. Southmayd Professor of Law and Professor of Philosophy, gives an innovative account of the origins of the modern international order. The book brings to light the monumental shift in international norms following the Kellogg-Briand Pact of 1928 in which nations came together to sign a treaty outlawing the use of war to resolve international disputes.

The Kellogg-Briand Pact was signed on August 27, 1928, among Germany, the United States, and France. The signatories resolved to renounce the use of war as an instrument of ordinary statecraft, thereby delegitimizing the conquest and occupation of one country’s territory by another. Internationalists gives a thoroughgoing account of the Pact’s coming to fruition and some of its underappreciated effects. “Before 1928, war was legitimate and legal, while economic sanctions were illegal.” Professor Shapiro said. “After 1928, this situation flips.”

“At first people thought the Kellogg-Briand Pact, also known as the Pact of Paris, was something ridiculous,” Shapiro said. “It was thought to be something ridiculous.” However, far from being ridiculous, he continued, “the Pact became transformative to the practice of international politics.” For Shapiro, “outlawing war also seems ridiculous from our standpoint because war appears to be the breakdown of the system. But before 1928, war was the system.”

The rights and responsibilities of states in the international system before 1928 included the privilege to use force. “This privilege comprised the rights of conquest, the license to kill, gunboat diplomacy, and the neutrality of other states counted as impartiality,” Shapiro argued. He gave the example of the United States’ Conquest of California in 1848 as compensation for a debt owed by Mexico, which would be impossible to replicate today because of the Pact of Paris. “If war is legal, there can be no crime of aggression. Similarly, if war is legal, other states cannot favor either of the warring nations.”

Professor Hathaway then summarized the transformation wrought by the Pact of Paris, which forms the bulk of Internationalists. “Almost every nation in the world ratified the Pact,” she said. “In the New World Order, conquest became illegal, military aggression became a crime, there could be no coerced agreements, and sanctions were permitted.” Indeed, the Pact was the basis on which Henry Stimson renounced the Japanese invasion of Manchuria. “Neutrality now permitted partiality,” Hathaway argued. “Now there could be prosecutions for crimes of aggression. The Nuremberg indictments, for instance, relied heavily on the Kellogg-Briand Pact.”

Hathaway further argued that “the United Nations Charter builds on the foundations of the Kellogg-Briand Pact.” One of the major discoveries of Internationalists is the finding by Hathaway and Shapiro that the first draft of the UN Charter, now contained in Article 2 (4), was written by the same person—James T. Shotwell—who penned the first draft of the Pact of Paris for Aristide Briand, the Prime Minister of France. The new perspective on “the prohibition of force,” as Hathaway called it, “was the direct result of the transformation of international law initiated by Kellogg-Briand Pact.”

In response, John Mearsheimer took a realist perspective to provide a counterpoint to the story advanced in Internationalists. “No realist believes that law is irrelevant and power is all that matters. Every sensible realist understands that power doesn’t always explain everything and law matters a great deal because you still need institutions to run the world,” he said. “However,” he continued, “when vital interests are at stake, great powers will always violate the law.”

Mearsheimer argued that the truly transformative episode in the history of international relations in the twentieth century was the proliferation of nuclear weapons. “Internationalists argues that laws can induce states to act contrary to their incentives; in fact, that laws can change those incentives. But there’s not much evidence that when states enter a conflict it’s international law that prevents war.” Most importantly for Mearsheimer, Internationalists does not address the fact that “the United States is addicted to war and is the primary counterexample in this story.”

Tanisha Fazal, on the other hand, agreed with Hathaway and Shapiro about the emergence of a new world order based on transformative international norms. “My main problem is with the dating,” she said. “The transformation happens in 1945, not 1928.” Fazal maintained that her point “was empirical, not theoretical.” She argued that “the states committing territorial conquest after 1928 were mostly the Axis Powers, who lost the Second World War. 1928 as the pivotal moment would be more persuasive if post-1928 conquests by non-Axis powers were reversed. But they are not.” For Fazal, “Internationalists is successful in showing the emergence of a new set of legal instruments curtailing or prosecuting war.” “I am left wondering,” she concluded, “what this book would look like if written from a non-American perspective.”

Finally, Samuel Moyn called attention to the reality that “we live in an age of peace sponsored by the United States.” Like his fellow panelists, Moyn was “puzzled by how little the book references American violence and war during the period of the new world order.” “The new world order entrenched old gains for the great powers,” he argued, “and the rule changes were about conquest, not about war.” So wars became defensive and, Moyn continued, “the dark side of the new world order allowed non-violent domination.” The question to ask is “whether the end of conquest was simply its replacement by a system of non-violent subordination,” said Moyn. “There’s a collective amnesia about non-violent tools of control used by liberal internationalists,” he maintained. “Are these just a new version of age-old instruments of violence and control?”

Hathaway and Shapiro were cognizant of these critiques. “All of these responses are probably right,” Shapiro said. “But they are incomplete.” Internationalists does not claim to be a book about the origins of a perfect world. Rather, it tries to highlight an instance of hope that produced the current international order, however ambivalent it has proved to be. For Hathaway and Shapiro, “the Kellogg-Briand Pact changed the world for the better.”