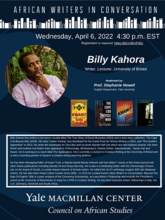 The next installation of the African Writers in Conversation Series featuring author, Billy Kahora. He has written a non-fiction novella titled “The True Story Of David Munyakei” (2010) and a short story collection, “The Cape Cod Bicycle War” (2019). His story “Urban Zoning” was shortlisted for the Caine Prize for African Writing in 2012, “The Gorilla’s Apprentice” in 2014. He wrote the screenplay for “Soul Boy” and co-wrote “Nairobi Half Life” which won the Kalasha awards. His short fiction and creative non-fiction have appeared in Chimurenga, McSweeney’s, Granta Online, Internazionale and Vanity Fair and Kwani. He is working on a novel titled “The Applications”. He is currently a Lecturer in Creative Writing at the University of Bristol and is also a founding partner of “Saseni!” a creative writing teaching platform.