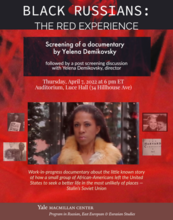 Black Russians: The Red Experience Documentary Screening, with a post screening discussion with the film’s director, Yelena Demikovsky
location: Luce Hall Auditorium (34 Hillhouse Ave)
Register to attend in-person: https://bit.ly/REEESEvent-Registration
Black Russians: The Red Experience is a work-in-progress documentary by filmmaker Yelena Demikovsky that explores the lives and experiences of a group of American intellectuals
who sought to leave behind Jim Crow America in exchange for the promise of a better life in Stalin’s Russia. But, did they find their ‘Promised Land’?
Or were they used as pawns in a political game between East and West?
The central character of the film, Yelena Khanga is one of the best-known of Russia’s black citizens and TV personalities. Yelena Khanga’s story of her family’s journey to the Soviet Union started in 1931, when her grandparents, Oliver Golden, a black American agricultural specialist, and his wife, Bertha Bialek, the daughter of a rabbi, fled from racism and segregation in the United States to the Soviet Union to pursue their dream. But in 1937 Stalin repressions started, and even though the racism was never a problem anymore, their dreams shattered. The Iron Curtain was kept closed until the Gorbachev era in the mid 1980s. It’s only in the 90s when Yelena Khanga and her mother were able to reunite with their relatives both, black and white, in the United States. There are parallels and contradictions that resonate today with the current crisis in Russia.