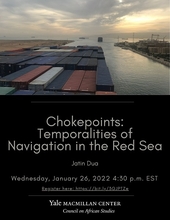 Shipping plays a crucial role in global circulation and geopolitical imaginaries of mobility. Approximately 90% of the world’s imports and exports travel by sea on some 93,000 merchant vessels, operated by 1.25 million seafarers, carrying almost six billion tons of cargo. This global circulation, however, is dependent on navigating a variety of chokepoints—narrow straits, ports, and other geographic locales that ‘choke’ the seemingly frictionless flow of global shipping. Focusing on ports and shipping lanes in the Bab-el-Mandeb, a narrow strait that separates Africa from Asia and connects the Red Sea to the Indian Ocean, this talk explores the generative power of chokepoints. Beyond the problem of lag, the talk argues for understanding chokepoint politics—a mode of politics and place-making built on channeling circulation.