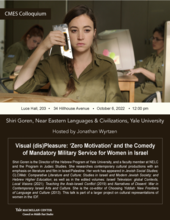 Hosted by Jonathan Wyrtzen
Shiri Goren is the Director of the Hebrew Program at Yale University, and a faculty member at NELC and the Program in Judaic Studies. She researches contemporary cultural productions with an emphasis on literature and film in Israel/Palestine. Her work has appeared in Jewish Social Studies; CLCWeb: Comparative Literature and Culture; Studies in Israeli and Modern Jewish Society; and Hebrew Higher Education; as well as in the edited volumes: Israeli Television: global Contexts, Local Visions (2021); Teaching the Arab-Israeli Conflict (2019) and Narratives of Dissent: War in Contemporary Israeli Arts and Culture. She is the co-editor of Choosing Yiddish: New Frontiers of Language and Culture (2013). This talk is part of a larger project on cultural representations of women in the IDF.