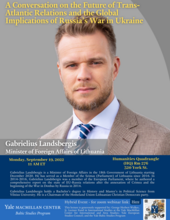 A Conversation on the Future of Trans-Atlantic Relations and the Global Implications of Russia’s War in Ukraine
By Gabrielius Landsbergis, Minister of Foreign Affairs of Lithuania and Moderated by Professor Edyta Bojanowska
Event will be available in a hybrid format (zoom and in-person).
Register here for zoom: https://bit.ly/YaleBaltic-Sept19
Register here to attend in-person: https://bit.ly/YaleBaltic-EventRegistration
Room location is HQ Rm 276 (Humanities Quadrangle, 320 York St.)
Gabrielius Landsbergis is a Minister of Foreign Affairs in the 18th Government of Lithuania starting December 2020. He has served as a Member of the Seimas (Parliament) of Lithuania since 2016. In 2014-2016, Gabrielius Landsbergis was a member of the European Parliament, where he authored a comprehensive report on the state of EU-Russia relations after the annexation of Crimea and the beginning of the War in Donbas by Russia in 2014.

Gabrielius Landsbergis holds a Bachelor’s degree in History and Master’s in Political Science from Vilnius University. He is a Chairman of the Homeland Union-Lithuanian Christian Democrats party.
This lecture is generously supported by: George Herbert Walker, Jr. Lecture Fund in International Studies at the Yale MacMillan Center for International and Area Studies. Co-Sponsored by the Yale MacMillan Center’s European Studies Council, and the Baltic Studies Program