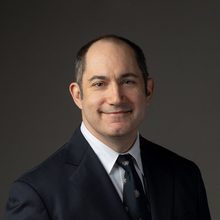 On April 5, International Security Studies will host a conversation with Adrian Bonenberger ’02, president of the Yale Veterans Association, and his wife, Iryna Solomko.
The pair will reflect on Bonenberger’s recent trip to Ukraine, where he was among a group of American combat veterans who gave a two-week crash course to volunteers of Ukraine’s Territorial Defense Forces. The American veterans—who organized and paid for the trip themselves—trained the volunteer fighters in small unit tactics and leadership.
Bonenberger served with the U.S. Army from 2005-2012 as an infantry officer, completing two tours in Afghanistan. He and his wife, a Ukrainian journalist who works for Voice of America, now live in Connecticut. Bonenberger is the editor of Yale Medicine Magazine.
Bonenberger will discuss his experience and take audience questions. James Hatch, a fellow veteran and a Yale undergrad enrolled in the university’s Eli Whitney Students program, will moderate.
Attendance is limited to members of the Yale campus community with Yale ID.