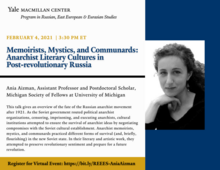 The second colloquium in the series features Ania Aizman, Assistant Professor and Postdoctoral Scholar, Michigan Society of Fellows at University of Michigan. She will present on “Memoirists, Mystics, and Communards: Anarchist Literary Cultures in Post-revolutionary Russia”
This talk gives an overview of the fate of the Russian anarchist movement after 1921. As the Soviet government routed political anarchist organizations, censoring, imprisoning, and executing anarchists, cultural institutions attempted to ensure the survival of anarchist ideas by negotiating compromises with the Soviet cultural establishment. Anarchist memoirists, mystics, and communards practiced different forms of survival (and, briefly, flourishing) in the new Soviet state. In their literary and artistic work, they attempted to preserve revolutionary sentiment and prepare for a future revolution.

Register for virtual event: http://bit.ly/REEES-AniaAizman
Ania Aizman holds a Ph.D. from Harvard and a bachelor’s degree from the University of Chicago, both in Comparative Literature, and with a focus on Russian and Czech. At the University of Michigan, she is writing a book: “From Tolstoy to Pussy Riot: Anarchist Currents in Russian Culture.” Based on archival research and oral histories with artists, writers, and activists, it finds missing links between the nineteenth-century anarchist movements, Soviet underground cultures, and contemporary collectives. It also proposes an anarchist literary theory. Ania’s other research project focuses on contemporary theater in Russia. For this project, she conducted interviews and performance and rehearsal observations between 2014-2018. Her translations of plays by contemporary playwrights Mikhail Durnenkov, Mikhail Ugarov, and Elena Gremina were published by the Performing Arts Journal and Columbia University Press. An article exploring the anarchist aesthetics of Pussy Riot and the OBERIU was published in The Russian Review in January 2019. Ania has also written about trophy films, Russian “New Drama,” and the politics of Soviet children’s poems.