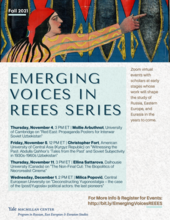 The second colloquium in the series features Christopher Fort, Assistant Professor, American University of Central Asia (Kyrgyz Republic). He will present on “Witnessing the Past: Abdulla Qahhor’s ‘Tales from the Past’ and Soviet Subjectivity in 1930s-1960s Uzbekistan.”

Register to Attend on Zoom: https://bit.ly/REEES-CFort
This paper examines the final work of Soviet Uzbek author Abdulla Qahhor, “Tales from the Past” (“O‘tmishdan ertaklar,” 1965), an episodic autobiographical novella that, according to the author and his readers at the time, “unmasks” the evils of pre-Soviet Central Asia in order to justify the post-revolutionary Soviet state. The paper uses the example of Qahhor’s novella to argue that Qahhor, and other Soviet Uzbek authors like him who wrote similar autobiographical pieces between the 1930s and 1960s, had another, less discussed goal with his autobiography: to publicly present himself as a Soviet citizen through the act of witnessing and revealing the cruelty of the pre-Soviet past. With this, I suggest that Soviet Uzbek men of letters pioneered a mode of Soviet subjectivity parallel to the better-known subjectivity studied by Russianists. Whereas the Russian authors and public figures studied by the Soviet subjectivists typically represented themselves as revolutionaries who constantly struggled between the Marxist-Leninist dialectic poles of spontaneity and consciousness, Uzbek authors like Qahhor presented themselves in these narratives of the pre-Soviet past as passive witnesses, as Soviet new men awaiting the revolution in order to achieve self-actualization.
Bio:
Christopher Fort is Assistant Professor of General Education at American University of Central Asia in Bishkek, Kyrgyzstan. Christopher completed his PhD in Slavic Languages and Literatures in July 2019. In July 2019 he defended his dissertation, Inhabiting Socialist Realism: Soviet Literature from the Edge of Empire, which examines how Uzbek litterateurs interpreted the Russian-born strictures of Socialist Realism through the prism of their own literary and cultural traditions. He is interested in the relationship between narrative, ideology, subjectivity, and the state, and his current research explores the ways in which Uzbek authors used native narrative forms to construct their public Soviet selves. He is the author of articles on Tolstoy and Pelevin, as well as the translator into English of two Uzbek novels: Abdulhamid Sulaymon o‘g‘li Cho‘lpon’s 1934 novel Night and Day and Isajon Sulton’s 2011 novel The Eternal Wanderer.
Image credit: Drawings by N. Vorob’eva. “Gospod’ bog.” Literaturnaia gazeta. September 13, 1967. Images rearranged from newspaper by author.