Europe and the War in Ukraine: Russia’s Intent and Impacts on the EU System and Transatlantic Relations 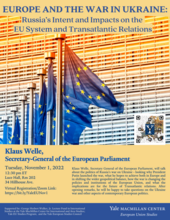 The EU Studies Program welcomes Secretary-General Klaus Welle, of the European Parliament to Yale University to present on “Europe and the War in Ukraine: Russia’s Intent and Impacts on the EU System and Transatlantic Relations”
In person: Luce Hall, Rm 202, 34 Hillhouse Ave.
Virtual Registration/Zoom Link: https://bit.ly/YaleEUNov1
Klaus Welle, Secretary General of the European Parliament, will talk about the politics of Russia’s war on Ukraine - looking why President Putin launched the war, what he hopes to achieve both in Europe and in shifting the wider geopolitical balance, how the war is changing the policies and institutions of the European Union, and what the implications are for the future of Transatlantic relations. After opening remarks, he will be happy to take questions on the Ukraine war and other aspects of contemporary European politics.
Klaus Welle has been Secretary General of the European Parliament, a key administrative post in the European Union political system in Brussels , since 2009. He previously served as chief of staff to the President of the European Parliament, as Director General for EU Internal Policies in the Parliament’s administration, and as Secretary General successively of the (center-right) European People’s Party (EPP) transnational political party and of the EPP political group in the European Parliament. Mr Welle started his career as a banker and then became head of European and foreign policy at the headquarters of the CDU party in Germany, working closely with then Chancellor Helmut Kohl. He is also a visiting professor in European politics at KU Leuven University in Belgium.
This lecture is generously supported by: George Herbert Walker, Jr. Lecture Fund in International Studies at the Yale MacMillan Center for International and Area Studies. Co-Sponsored by the Yale MacMillan Center’s Program on EU Studies and the European Studies Council