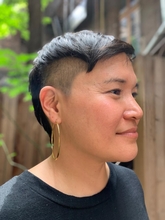 South Korea has long been known as the “plastic surgery capital of the world” with the highest rates of plastic surgery per capita globally. In this talk, I ask how cosmetic surgery becomes normalized as economically and socially viable? And, how does this normalization get disrupted? I argue that feminist abstraction is one method through which cosmetic surgery, and Korean beauty more broadly, is sold in contemporary global Korean cultural products such as K-pop and K-dramas. Feminist abstraction codes contemporary beauty regimes as resistance and in so doing, normalizes beauty regiments as gender empowerment and self-care. Yet, young Korean feminists have responded to these abstractions with on-the-ground anti-beauty movements as well. Given that KPOP is a global phenomenon with more than 35.5 million fans in 86 different countries, these cultural productions and conversations –and the tensions they produce around femininity and feminism –shape not only ideas about South Korea but about Asian beauty, Asian bodies, and Asian feminisms more generally worldwide.
S. Heijin Lee is Assistant Professor in Social and Cultural Analysis at NYU whose research explores the imperial routes of culture and media. In addition to her forthcoming book, The Geopolitics of Beauty, which maps the convergence of pop culture and plastic surgery coming from South Korea, Lee is co-editor of Fashion and Beauty in the Time of Asia (NYU Press, 2019) and Pop Empires: Transnational and Diasporic Flows of India and Korea (University of Hawai’i Press, 2019). Lee has been featured on National Public Radio’s Code Switch, Korea Society’s “K-Pop 101” series, and at KCON discussing beauty, pop and power.