The Impact of Social, Economic and Political Inequalities on Health in Russia and CIS Countries 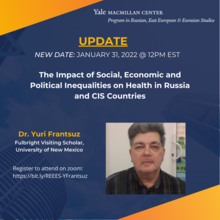 New Date- The REEES Program of the MacMillan Center, Yale University, presents Dr. Yuri Frantsuz, a Fulbright Visiting Scholar at the University of New Mexico and a Research Fellow at the Institute of Sociology of the Russian Academy of Science, on “The Impact of Social, Economic and Political Inequalities on Health in Russia and CIS Countries”
Register to attend on zoom: https://bit.ly/REEES-YFrantsuz
Problem of social, economic, and political inequalities’ impact on health differentials is the one that is becoming more current worldwide. One can mention increase of inequality between major tiers of the countries or increasing social and economic inequality in US and Western Europe these days, to name but a few. Many experts predict the increase of social and economic inequality in the world, in opposite to what the proponents of globalization have predicted earlier. One of the most impressive examples of the listed types of inequalities have recently emerged in Russia and other former republics, then comprising the USSR and currently the CIS (Commonwealth of Independent States) countries.

Last two and a half decades were characterized with significant increase of an overall economic and social inequality in Russia and many of the CIS countries. This phenomenon was the result of the transition from the planned, or the so-called administrative-command economy to the specific types of market economy. It took place at all CIS countries during the last two and a half decades, though at a different pace and with a great variety of the market economy kinds across these countries.
Major theories of social and economic inequality’s impact on major determinants of health operate at three levels: micro-personal, mesa-community and macro-societal (Rowington, 2011; Whitehead et. al. 2016; Leigh, A., Ch. Jenks, T. Sneeding. 2009). At all levels the degree of control over people’s lives and destiny, a feature of a socioeconomic status (SES), is considered the major factor in affecting health determinants. The macro-level is especially applicable to societies undergoing rapid and radical transition like the former republics of the USSR, currently CIS countries. Indeed, not only social structure but the very cultural attitudes towards different strata, polarization of society and the very ability to control of one’s life and destiny has undergone radical and dramatic change. I attempt to define the impacts of social, economic, and political inequalities on various health differentials, taking into account not only objectively existing inequalities, but also their subjective perceptions, determined by the culture of a given country and region.
Bio: Dr. Yuri Frantsuz is a Fulbright Visiting Scholar at the University of New Mexico and a Research Fellow at the Institute of Sociology of the Russian Academy of Sciences. He is also an invited Lecturer at the Smolny College of Liberal Arts and Science of the St. Petersburg State University. He is a “kandidat nauk” in Economics of Population and Demography, and also received his PhD in Sociology from the University of Minnesota. His areas of research interest include population theories and policies, social and political demography, sociology of health, and social inequality and health.
Dr. Yuri Frantsuz carries several honor awards for teaching and mentorship of students at the universities of Russia and US, and he is a recipient of several prestigious research grants in the US and Europe.