Iranian Film: Of Kings and Paintings 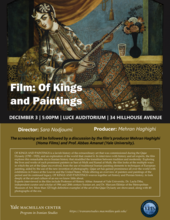 OF KINGS AND PAINTINGS is a lavish history of the extraordinary art that was commissioned during the Qajar Dynasty (1785 - 1925), and an exploration of the world that created it. In interviews with history and art experts, the film explores this remarkable era in Iranian history that straddled the transition between tradition and modernity. Exploring the lives and works of such prominent painters as Sani al-Mulk and Kamal al-Mulk, the film looks at the multiple ways in which the art of the Qajar era evolved, from the use of traditional Iranian painting elements to techniques of European painting, aided by the use of the new invention of photography. Qajar art has gained prominence all over the world with exhibitions in France at the Louvre and the United States. While offering an overview of painters and paintings of the period and its continued legacy, OF KINGS AND PAINTINGS weaves together art history and Persian history, to look deeply at the art and culture of an era we know little about.
Experts interviewed in the film include Professor of History Abbas Amanat of Yale University, Dr. Layla Diba, independent curator and scholar of 19th and 20th century Iranian art, and Dr. Maryam Ekhtiar of the Metropolitan Museum of Art. More than 125 high definition examples of the art of the Qajar Dynasty are showcased, along with 40 photographs of the era.
Director: Sara Nodjoumi
Producer: Mehran Haghighi
The screening will be followed by a discussion by the film’s producer Mehran Haghighi(Homa Films) and Prof. Abbas Amanat (Yale University).