Kazakhstan After 2022: What’s Next for the Country? 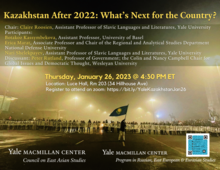 The Russian, East European, and Eurasian Studies Program and the Council on East Asian Studies of the Yale MacMillan Center present a roundtable on “Kazakhstan After 2022: What’s Next for the Country?” Featuring:
Chair: Claire Roosien, Assistant Professor of Slavic Languages and Literatures, Yale University
Participants: Botakoz Kassymbekova, Assistant Professor, University of Basel; Erica Marat, Associate Professor and Chair of the Regional and Analytical Studies Department, National Defense University; Nari Shelekpayev, Assistant Professor of Slavic Languages and Literatures, Yale University; Nargis Kassenova, Senior Fellow, Harvard University and Dmitriy Mazorenko, editor of Kazakhstan independent online media “Vlast.kz”.
Discussant: Peter Rutland, Professor of Government; the Colin and Nancy Campbell Chair for Global Issues and Democratic Thought, Wesleyan University
Location: Luce Hall, Rm 203 (34 Hillhouse Ave)
Register to attend on zoom: https://bit.ly/YaleKazakhstanJan26
Photo Credit: Timur Nussimbekov
The year of 2022 was arguably the most tragic and loaded year in Kazakhstan’s history since independence in 1991. First, in January thousands of people protested all over the country, which resulted in more than 200 shot by the police and thousands wounded and trialed. In June, a referendum was held, which introduced changes to 33 articles of Kazakhstan’s constitution. In September, the capital of Kazakhstan was renamed back as “Astana”, after three years of inglorious existence as “Nur-Sultan”, in honor of the first former president of Kazakhstan, Nursultan Nazarbayev. Both the referendum and the renaming were acts that further erased Nazarbayev from the political and symbolic landscape of the country and its capital. Finally, in October 2022, new presidential elections will be held, in which Kassym-Jomart Tokayev is likely to win. All these events are part of several intersecting processes: on one side, the transition of power from Nazarbayev to Tokayev, which began in 2019, and which has provoked an ongoing struggle of Kazakhstani elites for Nazarbayev’s legacy. On the other side, the events of 2022 reflect a longer trend associated with political and socio-demographic transformations in Kazakhstani society, which began in the 2000s and intensified towards the end of the 2010s. How will the economic and political situation in Kazakhstan develop in the coming years? What is the role of Russia and the war in Ukraine in the foreign and domestic policy of Kazakhstan? What are the prospects for studying the Central Asian region for the scholars of Eurasia from various fields, given the current political situation in the former Soviet Union? A reception will follow.