KGB Surveillance in the Soviet Baltic Republics: Documentary Evidence and Coping with the Past Symposium 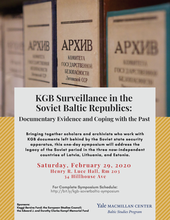 In December 2018, the National Archive of Latvia began publishing online information left by the KGB in Latvia after the collapse of the USSR in 1991. This has caused quite an uproar as the files contain both the code names and real names of individuals who were possible KGB agents in their own homeland of the Latvian Soviet Republic. Among the some 4,000 people named are a former prime minister of independent post-Soviet Latvia, a supreme court justice, a former foreign minister, and other well-known public figures. The KGB files left in Latvia are more extensive than those left in Lithuania, and much fewer are available in Estonia, but all three societies are still left with the challenge of coping with a legacy from the Soviet period (1940-1941; 1944-1991) that involves Estonians, Latvians, and Lithuanians collaborating with the Soviet state security agency – the KGB – to spy on their fellow citizens. This one-day symposium will bring together scholars and archivists who have worked with KGB documents left behind by the Soviet state security apparatus in the three now-independent countries of Latvia, Lithuania, and Estonia, with an emphasis on documents from the 1960s to 1991.