PRFDHR Seminar: The Return of Pachamama, Professor James A. Robinson 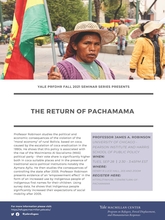 Professor Robinson studies the political and economic consequences of the violation of the “moral economy” of rural Bolivia, based on coca, caused by the escalation of coca eradication in the 1990s. He shows that this policy is associated with the rise of the Movimiento Al Socialismo (MAS) political party - their vote share is significantly higher both in coca suitable places and in the presence of traditional socio-political institutions notably the Aymara Ayllu. He then studies the consequences of controlling the state after 2005. Professor Robinson presents evidence of an “empowerment effect” in the form of an increased use by indigenous people of indigenous first names for their children. Using survey data, he shows that indigenous people significantly increased their expectations of social mobility after 2005.
James Robinson is the Reverend Dr. Richard L. Pearson Professor of Global Conflict Studies and University Professor at the Harris School of Public Policy and in the Department of Political Science at the University of Chicago, and Institute Director of The Pearson Institute for the Study and Resolution of Global Conflicts. He studied economics at the London School of Economics, the University of Warwick and Yale University. He previously taught in the Department of Economics at the University of Melbourne, the Department of Economics at the University of Southern California, the Departments of Economics and Political Science at the University of California at Berkeley and the Department of Government at Harvard. His main research interests are in comparative economic and political development with a focus on the long-run with a particular interest in Latin America and Sub-Saharan Africa. He is currently conducting research in Bolivia, the Democratic Republic of the Congo, Sierra Leone, Haiti and in Colombia where he has taught for many years during the summer at the University of the Andes in Bogotá.