From Rainbow Madonnas to Rainbow Families: LGBTQ Protest Movements in Poland and Hungary 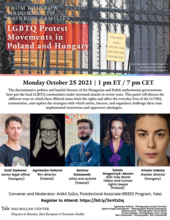 The discriminative politics and hateful rhetoric of the Hungarian and Polish authoritarian governments have put the local LGBTQ communities under increased attacks in recent years. Polish municipalities have declared themselves “LGBT-free zones” and prosecuted the protesting activists. Meanwhile, the Hungarian parliament revised the constitution to legally establish that in a family “the mother is a woman, the father a man,” and also passed a law that bans the “promotion” of sexual orientation in schools and in other public institutions. This panel, with the participation of artists, activists, and scholars, will discuss the different ways in which these illiberal states limit the rights and affect the everyday lives of the LGTBQ communities, and explore the strategies with which artists, lawyers, and organizers challenge these state implemented restrictions and oppressive ideologies.