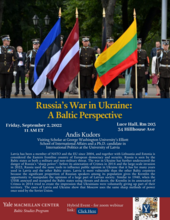 Yale Baltic Studies Program presents Andis Kudors, a Visiting Scholar at George Washington University’s Elliott School of International Affairs, on “Russia’s War in Ukraine: A Baltic Perspective” Event will be available in a hybrid format (zoom and in-person).
Register here for zoom: https://yale.zoom.us/webinar/register/WN_yJsR5SHsTmKUpFmm5EUmXQ
Room location is Luce Hall, Rm 203, 2nd floor
Latvia has been a member of NATO and the EU since 2004, and together with Lithuania and Estonia is considered the Eastern frontline country of European democracy and security. Russia is seen by the Baltic states as both a military and non-military threat. The war in Ukraine has further underscored the danger of Russia’s “sharp power”: before its annexation of Crimea in 2014 and the large-scale invasion in 2022, Russia used the same tools to influence public opinion in Ukraine that it has for many years used in Latvia and the other Baltic states.
Latvia is more vulnerable than the other Baltic countries because the significant proportion of Russian speakers among its population gives the Kremlin the opportunity to manipulate the opinions of a large part of Latvian society. Similar to 1940, when the USSR annexed and occupied the Baltic states using threats and deceit, the Kremlin in its annexation of Crimea in 2014 tried to create the impression that Ukrainians were voluntarily giving up part of their territory. The cases of Latvia and Ukraine show that Moscow uses the same sharp methods of power once used by the Soviet Union.
Bio: Andis Kudors is a Visiting Scholar at George Washington University’s Elliott School of International Affairs and a Ph.D. candidate in International Politics at the University of Latvia. He is a 1996 graduate of the International Law and Economics Program at the University of Latvia’s Institute of International Affairs. From 2005 to 2011 he studied at the University of Latvia, specializing in Russian foreign policy and earning an additional B.A. and then an M.A. in political science. His research interests include national security, soft and sharp power, propaganda, disinformation, and informational warfare. He is the author of many analytical articles on Russian foreign policy and Latvian security, and is the editor of several books, including Fortress Russia: Political, Economic, and Security Development in Russia Following the Annexation of Crimea and its Consequences for the Baltic States (University of Latvia Press, 2016), The War in Syria: Lessons for the West (University of Latvia Press, 2016), and The War in Ukraine: Lessons for Europe (University of Latvia Press, 2015).
Mr. Kudors has been a member of the Foreign Policy Council at Latvia’s Ministry of Foreign Affairs since 2011. From 2006 to 2019 he was the Executive Director of the Centre for East European Policy Studies in Riga and from 2014 to 2015 was a Fulbright scholar at the Kennan Institute’s Woodrow Wilson Center in Washington, D.C. For his contributions to the study of Latvia’s national security, Mr. Kudors was appointed Commander of The Cross of Recognition by the President of the Republic of Latvia Egils Levits in 2021.