Treading on Sacred Words: The Buddhist Shrine of Khādalik in Ancient Khotan 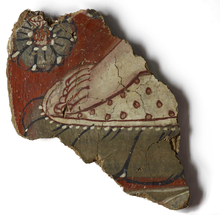 The ancient site of Khādalik, near the oasis of Khotan in the Central Asian Silk Road, was visited by early explorers of the area such as Ellsworth Huntington (1876–1947) and Aurel Stein (1862–1943). They found a shrine surrounded by an elaborate and exquisitely frescoed maze that pilgrims would have had to traverse in order to reach the inner sanctum. This sacred path was scattered with fragments of sacred Buddhist books probably left as offerings: The books were written in Sanskrit, Chinese, and the now extinct Iranian language of the kingdom at the time, Khotanese.
Stein alone brought about 2500 of those fragments to the collection of the British Library, while Huntington collected more than 40 which are now preserved in the Beinecke Rare Book and Manuscript Library at Yale but have remained so far unstudied. My talk presents a survey of the sacred books deposited at the site with special attention to the new Beinecke fragments, along with key features of the material conditions, art, architecture, and historical context of the shrine in order to paint a vivid picture of the practice of Buddhism on the Silk Road that highlights both its cosmopolitan nature and its specific local characteristics.—————————————Diego Loukota is Assistant Professor of South and Central Asian Buddhism at UCLA. His research features philological treatment of unpublished and undeciphered manuscript and document fragments from Central Asia, but constantly in dialogue with art history, archeology, and religion, underscoring the role of Buddhism within society and political power, its interaction with other religious traditions, and the texture of local culture and daily life in the multicultural mosaic of the Silk Road.———————————-This event is being co-sponsored by the Council on East Asian Studies, Department of Religious Studies, and Glorisun Global Network for Buddhism