After another Brexit defeat, UK-EU talks continue – and the Article 50 clock keeps ticking 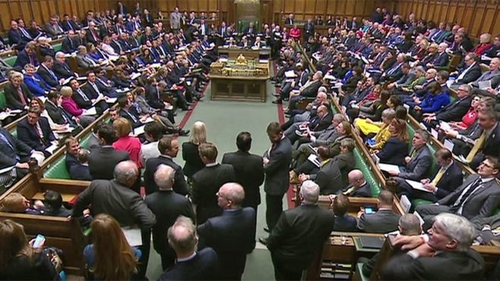 Last Thursday, British Prime Minister Theresa May suffered another Brexit defeat in the House of Commons when it rejected, by a vote of 258 in favor and 303 against, a motion that the House welcomed her statement two days earlier. The statement had reported on the government’s ongoing work to secure a Brexit deal in the wake of the massive defeat, by a vote of 202 in favor and 432 against, of the withdrawal agreement negotiated by the EU and UK and the subsequent vote on January 29 that the House “requires the Northern Ireland backstop to be replaced with alternative arrangements to avoid a hard border; supports leaving the European Union with a deal and would therefore support the Withdrawal Agreement subject to this change.”

The margin of defeat wasn’t nearly as large as the earlier one. But like the earlier one, it occurred because of the defection of a large number of Conservative MPs; five voted against the government and 67, including the members of the hard-Brexit European Research Group, abstained, apparently because the motion not only welcomed her statement and noted that discussions between the UK and the EU about the backstop were ongoing but also reiterated support for the approach to leaving the EU expressed by the House on January 29, which in effect took a no-deal exit off the table.

The defeat obviously wasn’t as consequential as the earlier one. But it nevertheless represented a serious setback for the government, if only because it called into question, again, its ability to obtain approval of the agreement, even if the current discussions with the EU result in some changes in the non-binding political declaration setting out the framework for the future relationship that accompanies the withdrawal agreement. That the government’s ability to secure approval should be called into question is, of course, hardly surprising; not only is it a minority government but it is one based on a party that has long been, and still is, deeply divided over the EU and Brexit.

Meeting with the ambassadors of the EU27 the day after the vote, Michel Barnier, the EU’s chief Brexit negotiator, said, bluntly, that May’s strategy had failed, that there’s no majority in the Tory party for the withdrawal agreement, that she needs to “go cross-party” and work with Labour, but that, in response to Jeremy Corbyn’s conditional offer of support, she “widened rather than narrowed” the difference between their positions. On Feb. 6, Corbyn wrote to May urging that the government change its “red lines” and seek changes to the political declaration that would aim to create a “permanent and comprehensive UK-wide customs union” with the EU, accompanied by a “close alignment with the Single Market,” that would assure that any backstop would be far less likely to be invoked. In her response, May rejected the suggestion because it would prevent the UK from conducting its own independent trade policy.

Nevertheless, talks are continuing, both between the EU and UK and between the British government and Labour. Last Monday, several days after Theresa May and European Commission President Jean-Claude Juncker agreed their teams would hold talks to determine if a way could be found to gain support in the UK Parliament for the agreement while respecting the European Council’s decision that negotiation of the withdrawal agreement can’t be reopened, Barnier and Stephen Barclay, the UK Secretary of State for Exiting the EU, met over dinner. Last Friday, Barclay met with the EU27 ambassadors and discussed the ideas put forward by the British Alternative Arrangements Working Group as well as the possibility of a legally-binding time-limit to the backstop and a legally-binding unilateral exit clause from the backstop. Today, British Attorney General Geoffrey Cox, accompanied by Barclay, met with EU officials to discuss how such legally-binding assurances might be conveyed, perhaps through a separate declaration or a joint interpretative instrument to accompany the agreement. On Wednesday, Prime Minister May, accompanied by Cox, will return to Brussels to discuss these possibilities.

Likewise, although objecting to Corbyn’s suggestion that the government amend the political declaration to support creation of a “permanent and comprehensive UK-wide customs union” and a “close alignment with the Single Market,” May suggested that their teams meet, and Sir Keir Starmer, the Labour shadow Secretary of State for Exiting the EU, and Jon Trickett, a senior Labour MP, met with Barclay and David Lidington, the minister for the Cabinet Office and de facto deputy to the prime minister. They will meet again this week and on Thursday Corbyn will meet in Brussels with Barnier and Guy Verhofstadt, the European Parliament’s chief Brexit negotiator who, like Tusk, Juncker and Barnier, has called for a cross-party majority to break the impasse.

As unlikely – and, indeed, unBritish – as a cross-party majority in favor of the withdrawal agreement may seem, last Thursday’s vote may have finally persuaded the prime minister to do what Barnier, Juncker, European Council President Donald Tusk and many others have urged – commit to creating a permanent customs union with the EU, thereby obtaining Labour’s support for the agreement, even if it requires abandoning one of the government’s “red lines” and results in substantial defections from the hard-Brexit wing of her party; after all, there are a lot more Labour MPs in the House than there are hard-Brexit Tories and the latter have already demonstrated they can’t be relied upon to support the government.

In her statement last Tuesday, Theresa May said that, having secured an agreement with the EU for further talks, some time is needed to complete the process, and when the government has achieved the progress that’s needed it will bring forward another “meaningful” vote – i.e., a vote on the agreement and declaration. If the government hasn’t yet secured a majority in the House in favor of a withdrawal agreement and political declaration, she said it will make a statement in the House next Tuesday, Feb. 26, table an amendable motion relating to the statement, and move the motion on Wednesday, Feb. 27, enabling the House to vote on it and any amendments that day.

There are 40 days left to March 29 and the Article 50 clock is ticking. Will the ongoing talks between the UK and EU and between the government and Labour be completed so the agreement and declaration can be put to another “meaningful vote” by next Tuesday? If not, will the government propose that it continue the discussions and schedule such a vote prior to the next European Council meeting on March 21-22? Or will it propose, either next week or later, that it request the EU27 to extend the Article 50 process beyond March 29? We’ll soon find out.