After another defeat in state election, Merkel announces she will step down as CDU leader 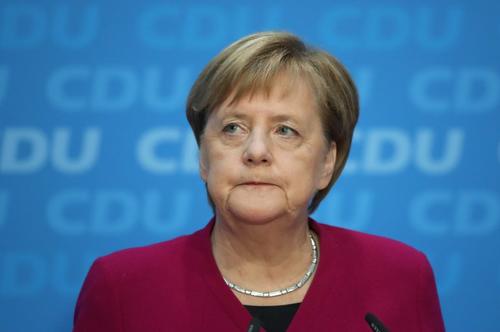 On Sunday, voters in the German state of Hesse went to the polls and elected a new Landtag. And as happened in the state election in Bavaria two weeks ago, the Christian Democratic Union (CDU) and the Social Democratic Party (SPD), which govern Germany in a “grand coalition,” suffered dramatic setbacks at the expense of the far-right, xenophobic Alternative for Germany (AfD) and the Greens.

That the Greens did so well is perhaps surprising in view of the fact that they have participated with the CDU in the governing coalition in Hesse for the last five years. But it suggests that, contrary to the experience of the CDU and SPD in last year’s federal election and in the Bavarian election two weeks ago, incumbency need not condemn a party to electoral defeat. While we won’t know until surveys taken of voters become available, it appears that, as in Bavaria, the success enjoyed by the Greens derived, at least in part, from their strong advocacy of a cluster of positions—greater reliance on renewable sources of energy, protection of the environment, reversal of climate change, assistance for the more than one million refugees who have arrived over the past five years, acceptance of immigration, support for the European Union—that make them an attractive alternative to the other parties, especially for younger voters.

After Sunday’s election, it seems likely the CDU-Green coalition government headed by Volker Bouffier, the CDU leader, will remain in power in Hesse, although by the narrowest of margins; with the CDU’s 40 seats and the Greens’ 29, a CDU-Green coalition would have a one-seat majority in the new Landtag, which, thanks to the complex two-vote electoral system, the fact that the CDU took 40 of the 55 district seats, and the need to add seats to make the overall distribution of seats proportional to the vote for the party list, will have 137 seats. As a result, there will be no need to negotiate a “Jamaica” coalition, named for the colors of the Jamaican flag—black, green, and yellow—that are also the colors of the CDU, Greens and FDP. That is probably just as well since, as the protracted and ultimately unsuccessful negotiation between the CDU and CSU, the CDU’s Bavarian sister party, Greens and FDP after last year’s federal election demonstrated, the FDP can be a difficult negotiating partner, especially when the Greens are involved. An alternative left-leaning three-party coalition composed of the SPD, Greens and Left would, with 67 seats, fall two seats short of a majority. So despite the large swings in support for the parties relative to the vote five years ago, it’s quite likely there will be no change in the composition of the state government.

Nevertheless, Sunday’s election, coming as it does only two weeks after the dramatic losses of the CSU and SPD in Bavaria, is likely to have significant consequences for Berlin. For one thing, it seems clear that the losses suffered by the CSU, CDU, and SPD in both states occurred not because of dissatisfaction among voters with what the parties had done or not done in the states but, rather, because of dissatisfaction with the performance of the “grand coalition” in Berlin.

And that dissatisfaction with the “grand coalition” is evident not only among the voters but within the leadership of the governing parties as well. The dramatic losses of the SPD, and gains of the Greens, in Bavaria and Hesse have rekindled the considerable opposition that arose within the SPD after last year’s federal election to its continued participation in the “grand coalition.” Indeed, they have raised the prospect that the SPD may pull out of the coalition at some point before the next election in 2021. Lars Klingbeil, the SPD’s secretary-general, said Hesse was “a signal that the grand coalition can’t go on like this.” And Andrea Nahles, the SPD leader, saying “the state of the government was not acceptable,” said she plans to hold discussions to create a “road map” that could be used when the SPD conducts its mid-term review next year of the performance of the government: “We could then gauge the implementation of this roadmap at the agreed mid-term review, when we would be able to clearly see if this government is the right place for us.”

If the defeats in Bavaria and Hesse have rekindled opposition within the SPD to continued participation in the “grand coalition,” they have also led to growing opposition within the CDU to Chancellor Angela Merkel’s continued leadership of the party. Even before the defeats in Bavaria and Hesse, there was evidence of disaffection with Merkel, who has led the CDU since 2000 and has been chancellor since 2005. In September, the CDU and CSU Bundestag members replaced Volker Kauder, a trusted ally of the chancellor and the leader of the parliamentary group since 2005, and two members announced they would challenge her in the December contest for the leadership of the CDU. On the day after the Hesse election, Merkel announced she won’t run in December for another two-year term as CDU leader and won’t be the CDU’s candidate for chancellor in the 2021 election.

Sunday’s election in Hesse probably won’t change who governs in Wiesbaden and it may or may not play a part in the eventual dissolution of the “grand coalition.” But if nothing else, it will be remembered as the election that prompted the first step in the departure from politics of the remarkable woman who has led Germany—and Europe—since 2005.