After another election setback, the CDU moves up date for choosing new leader 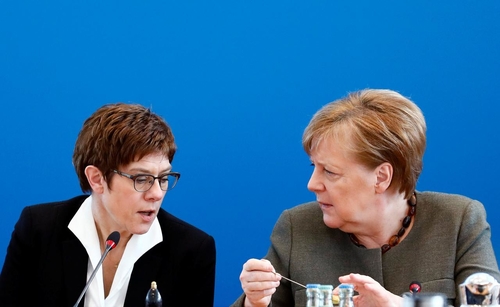 In the wake of another terrible performance in a state election—this one on Sunday in Hamburg—today the German Christian Democratic Union (CDU) moved up the date for its selection of a new leader to replace Annegret Kramp-Karrenbauer, who resigned last week. Initially expected to happen later in the year, AKK announced it will happen at a party congress on April 25.

No one expected the CDU to win or even do well in Sunday’s election for the Bürgerschaft. After all, it had won only 15 percent in the last election and Hamburg is the preserve of the center-left and left parties. Nevertheless, in yet another repudiation of the CDU, the party’s share of the vote dropped by almost four percentage points to 11.2 percent. In contrast, the Greens, who govern the state with the Social Democrats (SPD), won 24.2 percent, a gain of almost 12 percentage points. The SPD, despite losing nearly seven percent, won 39 percent of the vote.

And as if the CDU’s worst vote ever in the state was not enough, the far-right and xenophobic Alternative for Germany (AfD), which one of the Green leaders, Cem Ozdemir, accurately described as “the political arm of hate,” managed to surpass the five-percent threshold for representation in the state parliament, only four days after a gunman killed nine people, all of whom had migrated to Germany from Turkey or southeastern Europe, in Hanau. (He subsequently also killed his mother and himself.)

One individual has already announced his candidacy for the CDU leadership and others are likely to do so in the days ahead. Last week, after AKK announced she would step down as party leader, Norbert Röttgen, who has been the chair of the foreign affairs committee of the Bundestag since 2014 and prior to that served as the minister of the environment and as CDU leader in North Rhine-Westphalia, announced he would stand for the leadership. Those in the party who want someone who is well-informed about foreign policy, knowledgeable in particular about the EU, and capable of leading the party from the center of the political spectrum and competing with the Greens, are likely to support him. But another potentially strong candidate positioned near the center of the political spectrum is Armin Laschet, who succeeded Röttgen as CDU leader of North Rhine-Westphalia in 2012, has served as one of the deputy chairs of the national party since then, and has headed the CDU-FDP coalition government in the state since 2017. It’s not outside the realm of possibility that, if either Röttgen or Laschet wins the leadership, next year’s election could result in the first-ever “Jamaica” coalition (named for the black, yellow and green of the Jamaican flag and the colors of the CDU, FDP and Greens).

In addition to Röttgen and possibly Laschet, the two candidates who ran against AKK for the leadership at the December 2018 party conference—Friedrich Merz and Jens Spahn—may run again. Merz, a former leader of the CDU group in the Bundestag who opposed Merkel’s centrist tendencies, challenged her unsuccessfully for the leadership in 2002, quit the Bundestag in 2009 and was until recently the chairman of the supervisory board of BlackRock’s German unit, and lost to AKK in the second round of the 2018 leadership election, is likely to run again. Spahn, the minister of health, was eliminated from the 2018 leadership contest in the first round and may be disinclined to suffer another first-round elimination. But if he or Merz runs for the leadership and wins, the party’s positions on immigration and economic policy will in all likelihood pivot to the right, in the hope of retaining the support of CDU voters who are disgruntled with Merkel’s “grand coalition” centrism and bringing back to the party former CDU voters who have defected in recent elections to the AfD.