After the election and still divided, Catalonia needs to speak to Madrid with one voice 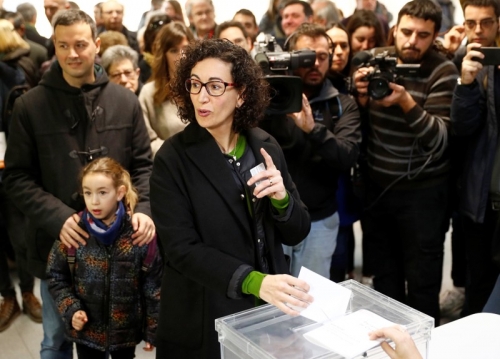 After the Catalan parliament voted to constitute a republic as an independent state on October 27, the Spanish Senate authorized the government of Prime Minister Mariano Rajoy to take whatever measures were necessary under Article 155 of the Constitution to ensure that Catalonia as an Autonomous Community fulfilled its obligations under the Constitution and didn’t act in ways that damaged the interests of the country. The next day, the Catalan government headed by President Carles Puigdemont was removed from office, Catalonia was placed under the control of Madrid, the Catalan parliament was dissolved, and new elections were called for December 21.

The Rajoy government hoped the dissolution of the parliament and new elections would result in an electoral backlash against the pro-independence parties that, despite the Constitution’s unambiguous prohibition of secession, had passed legislation calling for a binding referendum October 1 on creation of an independent republic and, despite the Constitutional Court’s suspension of that legislation, had conducted the referendum in which 90 percent of those voting supported independence. It hoped that, in contrast to the referendum, in which only 43 percent of the electorate voted, the new elections would bring to the polls a “silent majority” of voters opposed to independence who, either because they felt intimidated or threatened by the supporters of independence or because they believed it was illegal, didn’t vote in the referendum.

The Rajoy government miscalculated. Despite a much higher turnout than in the referendum – 79 percent, the highest in any Catalan election - the overall distribution of support between the pro- and anti-independence blocs remained largely unchanged. The three pro-independence parties – Together for Catalonia (Junts per Catalunya, formed by Puigdemont’s Catalan European Democratic Party, Partit Demòcrata Europeu Català, PDeCAT), the Republican Left (Esquerra Republicana de Catalunya, ERC), and the far-left Popular Unity Candidacy (Candidatura d’Unitat Popular, CUP) – won 47.6 percent of the vote, virtually identical to the 47.8 percent they won in 2015. Together for Catalonia, led by Puigdemont from Brussels, won 21.7 percent of the vote and 34 seats, a gain of three. The Republican Left, led in the election by Marta Rovira in place of the ERC’s jailed leader, Oriol Junqueras, won 21.4 percent of the vote and 32 seats, a gain of six. The CUP, however, won only 4.5 percent of the vote, little more than half of its 2015 vote and lost six of its ten seats in the outgoing parliament. The pro-independence bloc also lost five seats won by independents who campaigned in 2015 with the ERC and PDeCAT as part of the Together for Yes (Junts pel Sí) alliance. Taken together, the pro-independence forces retained a narrow majority in the Catalan parliament, with 70 of the 135 seats, only two less than they held in the outgoing parliament.

Among the anti-independence parties, undoubtedly the most notable development was the continued growth in support for the Citizens Party (Ciutadans) and the continued loss of support for Rajoy’s Popular Party. Founded in Catalonia in 2006 as a liberal and, depending upon the observer, centrist or center-right, anti-nationalist, pro-European party, the Citizens won 3 percent in the Catalan elections of 2006 and 2010, 7.6 percent in 2012, and then 17.9 percent in 2015. Entering the national arena as the Ciudadanos, it obtained 13.9 percent and 13.1 percent in the Spanish elections of December 2015 and June 2016 and supported the formation of a minority Popular Party government headed by Rajoy in October 2016. Led by Inés Arrimadas and campaigning with a slogan that many, after the events of past several months, could relate to – “Catalonia is my homeland, Spain is my country and Europe is our future” – the Citizens Party won 25.4 percent of the vote, a gain of 7.4 percentage points, and 36 seats, a gain of 11, making it the largest party in Catalonia both in vote share and seats. In contrast, Rajoy’s Popular Party lost more than half its 2015 vote share, dropping from 8.5 percent to 4.2 percent, and lost 7 of its 11 seats in the Catalan parliament. Rather than bringing out a “silent majority” opposed to independence, as Rajoy hoped, the December election provided Catalans with an opportunity to express their views regarding the Spanish government’s response to the referendum, its use of the national police in an effort to thwart the referendum, its application of Article 155, and its filing charges of sedition and rebellion against Puigdemont, Junqueras and many others. And they did so.

On Friday, Rajoy announced he will convene the Catalan parliament on Jan. 17. Its first task will be to elect a speaker who is then charged with conducting negotiations culminating in the formation of a new government. Whether Carme Forcadell will return to the position remains uncertain; like many others, she was charged, taken into custody, and subsequently released on bail. Also uncertain is whether eight elected members who are either in prison or out of the country will resign their seats so they can be replaced by their parties; if not, the pro-independence bloc will fall short of a majority. Also uncertain at this point is whether one or more of the pro-independence parties – most likely the ERC under its current leader Marta Rovira – will reach out to one or more of the anti-independence parties, either in an effort to bridge the divide between the two blocs or simply to prevent the far-left CUP from using its four seats as leverage in order to have its positions on independence and other issues accepted as the price for supporting a new government.

But what is certain is that, whatever government is formed, it will have to address the question of Catalonia’s place in and relation to Spain. That will certainly require negotiation with Madrid to restore the autonomy granted by the 1978 constitution that was terminated when the Spanish government assumed direct control under Article 155. It will also require negotiation with the Spanish government to address the grievances that gave rise to the 2006 statute that granted Catalonia greater autonomy – a statute that, despite its approval by overwhelming majorities in the Spanish and Catalan parliaments, was rejected by the Constitutional Tribunal in 2010. It was that rejection that fueled the growth in support for independence reflected in the annual National Day demonstrations, the 2014 non-binding referendum, and the October referendum. It may also require negotiation to amend the Spanish constitution to recognize Catalonia as a “nation.” It may even require negotiation to transform Spain from a unitary system of government with 17 “autonomous communities” into a federal system with 17 states.

The problem, of course, is that none of that is likely to happen if the three pro-independence parties that called the referendum and declared independence form the government. Having campaigned as defenders of the referendum and the independence which they called and declared, it would be very difficult for them to acknowledge their strategic and constitutional errors, especially while many of their leaders are in prison or in exile or facing possible charges. To do so would be regarded by many of their supporters as a betrayal of those leaders and the voters. That would be especially difficult for Together for Catalonia, with Puigdemont and others facing imprisonment if they return, and for the Left Republicans, with Junqueras and others in prison. Only Marta Rovira, who led the Republican Left campaign in place of Junqueras and is herself facing possible charges, appears willing to pursue a path toward greater autonomy rather than independence.

All of which suggests that if there is to be a lasting settlement of the Catalan issue, Catalonia will have to speak with one voice to Madrid. That can only happen if most if not all of the major parties in Catalonia, ranging from the Socialists and the Left Republicans to the Citizens and the People’s Party, work together for more autonomy and for constitutional change – and in doing so give real meaning to the slogan “Together for Catalonia.”

David R. Cameron is a professor of political science and the director of the MacMillan Center’s program in European Union studies.