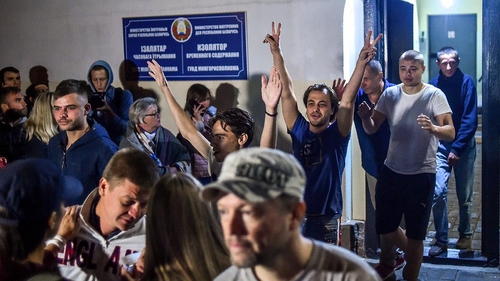 When the preliminary results were announced Sunday evening, there were widespread protests, to which the police and interior ministry forces responded with force. More than 1,000 protesters were arrested. On Monday, Tikhanovskaya, who entered the campaign after her husband Sergei, a dissident activist and blogger who had announced his intention to run against Lukashenko, was arrested, went to the Commission to file a complaint about the conduct of the election. She was detained there for seven hours by KGB personnel – Belarus is the only post-Soviet state that still retains the Soviet-era name (Committee on State Security) for the security agency – and was forced to make a video statement in which she called on her supporters to accept the results and stop the protests in exchange for the release of her campaign manager, who had been detained three days earlier, and being allowed to leave the country and rejoin her children in Lithuania, where they had been sent after threats were made against them. Both women were taken to the border with Lithuania, which offered them visas and announced they were safe. Tikhanovskaya’s obviously-forced video statement of course only fueled the protests, which have continued on a daily basis and to which the authorities have responded with more force, including the use of deadly force, and more arrests – more than 6,700 in all thus far. And by mid-week, as word spread of the beatings and torture of some of those detained, the daily protests were accompanied by strikes in a number of plants across the country.

It’s highly unlikely that Lukashenko won 80 percent of the vote and Tikhanovskaya only 10 percent, given the deteriorating state-controlled economy and the regime’s failure to respond effectively to the coronavirus pandemic. (He characterized the latter as “a psychosis” that could be treated with a sauna and vodka and rejected any lockdown, and the country has one of the highest rates of infection in Europe.) But obviously we’ll never know; neither the OSCE nor any other international observers were allowed to monitor the campaign and election, and the only exit poll, which was close to the reported outcome, was conducted by a firm close to the government. But what can be said is what Josep Borrell, the EU’s High Representative for Foreign Affairs and Security Policy, said Tuesday in a Declaration on behalf of the EU: “The elections were neither free nor fair…Furthermore, credible reports of domestic observers show that the electoral process did not meet the international standards expected of an OSCE participating State.”

Perhaps the best measure of the extent to which the elections were not free and fair was not the routine stuffing of some ballot boxes and destruction or disappearance of others but the sustained effort over the past several months to eliminate potential challengers to Lukashenko. In May, Tikhanovskaya’s husband was arrested two days after announcing he would run against him. In June, a widely-supported potential challenger, Viktar Babaryka, the former chairman of Belgazprombank, was arrested for illegal financial activities and in July the Central Election Commission rejected his registration papers on the grounds they didn’t report accurately his family’s income and property. And in late June, the Commission rejected the registration papers submitted by Valery Tsepkalo, a former ambassador to the U.S. and founder of the Belarusian High Technology Park. Understandably fearing arrest, he fled to Moscow.

It is, of course, not at all surprising that Lukashenko did what he did to ensure that he remained in office; doing whatever was needed in order to stay in power is one of the enduring features of his three decades in power. In the last years of the Soviet Union, Lukashenko was a member of the Communist Party and the director of the Gorodets state farm in eastern Belarus. In 1990, he was elected to the Supreme Soviet of the Byelorussian Soviet Socialist Republic of the U.S.S.R. After the attempted coup against Mikhail Gorbachev in August 1991, the republic declared its independence and in September 1991 became the Republic of Belarus. In 1993, Lukashenko became the interim chair of the anti-corruption committee of the Supreme Council, the successor body to the Supreme Soviet, and used that position to launch a successful campaign against both the head of state and the prime minister in the country’s first presidential election in 1994, winning 80 percent of the vote in a second round run-off against the prime minister.

In a joint statement on Monday, Borrell and Olivér Várhelyi, the EU Enlargement Commissioner who oversees the Eastern Partnership between the EU and six post-Soviet states, including Belarus, said the election night “was marred with disproportionate and unacceptable state violence against peaceful protesters….We condemn the violence and call for the immediate release of all detained during last night. The Belarusian authorities must ensure that the fundamental right of peaceful assembly is respected….Only upholding human rights, democracy, and free and fair elections will guarantee stability and sovereignty in Belarus. We will continue to closely follow the developments in order to assess how to further shape the EU’s response and relations with Belarus in view of the developing situation.”

And in his Declaration on behalf of the EU the next day, after noting that the elections were neither free nor fair, Borrell said, “State authorities deployed disproportionate and unacceptable violence causing at least one death and many injuries. Thousands of people were detained and the crackdown on freedoms of assembly, media and expression intensified. We call on the Belarusian authorities to release immediately and unconditionally all detained….Since the 2015 release of political prisoners, the relationship between the EU and Belarus had improved. But without progress on human rights and the rule of law, the EU-Belarus relationship can only get worse. It is against this background that we will be assessing the Belarusian authorities’ actions to address the current situation and conducting an in-depth review of the EU’s relations with Belarus. This may include, inter alia, taking measures against those responsible for the observed violence, unjustified arrests, and falsification of election results.”

An extraordinary meeting of the EU’s Foreign Affairs Council was called for today at which the foreign ministers would discuss how to respond to the events this week in Belarus. After the election and as large numbers of protesters were detained, Poland, Lithuania, Latvia, Sweden, Germany and other member states called for new sanctions to be imposed on Belarus. The EU has imposed sanctions on Belarus on several occasions in the past. In 2004, it applied sanctions as a result of the disappearance of two opposition politicians and two other individuals in 1999 and 2000. In 2011, it applied sanctions on individuals who violated international electoral standards and human rights laws in a crackdown after the 2010 election on the democratic opposition and imposed an arms embargo on equipment that could be used for internal repression. In 2016, after Belarus had released a number of political prisoners, it lifted the sanctions on 170 individuals and four companies but retained the arms embargo and the asset freeze and travel ban on four individuals. In February, it retained those sanctions and the arms embargo for another year.

The problem with sanctions, of course, is that their imposition requires the unanimous support of the 27 member states and the leader of one member state – Viktor Orbán – has already gone on record, in a visit to Minsk in June, as favoring termination of the existing sanctions and has subsequently made known his strong opposition to the imposition of new sanctions on Belarus. With that in mind, prior to today’s meeting, Poland, the Czech Republic, Estonia, Latvia, Lithuania and Denmark issued a joint letter calling for “restrictive measures” – a euphemism that could of course include sanctions but avoids provoking Orbán’s announced opposition to the latter term – against the Belarusian officials responsible for the election result and the treatment of those detained in the protests.

Nevertheless, there were and are strong voices in the EU calling for new sanctions, not least from Germany, which currently holds the six-month rotating presidency of the Council of Ministers. Today, a spokesman for Chancellor Angela Merkel said she was “shocked” by, and regarded as “unacceptable,” the detention and abusive treatment of the post-election protesters and had demanded an unconditional and immediate release of all of the detained demonstrators. And he said, “In our view sanctions against those responsible for human rights violations will have to be discussed.” In a similar tone, European Commission President Ursula von der Leyen tweeted, “We need additional sanctions against those who violated democratic values or abused human rights in Belarus. I am confident today’s EU Foreign ministers’ discussion will demonstrate our strong support for the rights of the people in Belarus to fundamental freedoms & democracy.”

In response to the public and private pressure from Germany and the EU, last night the Belarus interior minister went on television and took responsibility, and apologized, for the detentions and the injuries inflicted on those arrested. And today, the authorities began releasing those detained and vowed to release all of those detained by the end of the day. As the detainees were released, with some of them being treated immediately outside the detention centers for their injuries while others were driven away, crowds gathered and cheered and applauded, many with tears in their eyes.

As that was happening, the EU foreign ministers discussed, via video conference, how to respond to Lukashenko’s reelection and the arrest of the thousands who protested the outcome of the election. Belarus may have thought its decision to release all those detained in the protests would enable it to avoid a new round of sanctions. But after a discussion that went on for several hours, the ministers agreed that Borrell’s office will draw up a list of the Belarusian officials and organizations who are responsible for the arrests and detention of the protesters and should be sanctioned. Several ministers – most notably, Heiko Maas of Germany, who chaired the meeting, and Ann Linde of Sweden – called for tougher sanctions while others – most notably, the ministers of the Czech Republic, Denmark, Lithuania, Latvia and Estonia – called for some type of mediation between Lukashenko and the opposition. Meanwhile, the Hungarian minister, although opposed to sanctions, held his fire for the time being, knowing as he did that, once the list of the individuals and organizations to be sanctioned is prepared, all 27 member states must agree on each name on the list in order for that person or organization to be sanctioned – which of course means that, in all likelihood, whatever sanctions are eventually proposed won’t be imposed.