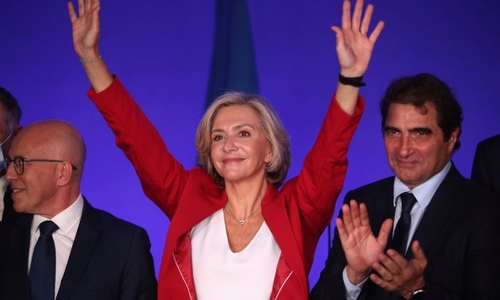 On April 10, French voters will go to the polls in the first round of the presidential election. When they do, they will find, in addition to President Emmanuel Macron, running for a second five-year term, candidates ranging from the far left to the far right. Some will be repeats from 2017 such as the hard-left Jean-Luc Mélenchon, of La France Insoumise (France Unbowed). Others will be newcomers such as the xenophobic, anti-Muslim Éric Zemmour on the far right. But perhaps the most noteworthy feature will be the presence of three women standing as the candidates of major parties—Anne Hidalgo, the Socialist mayor of Paris; Marine Le Pen, the leader of the Rassemblement National (formerly the Front National) who ran against Macron in 2017; and Valérie Pécresse, the president of the Ȋle-de-France regional council who on Saturday was chosen by the members of Les Républicains, the mainstream conservative party, as their candidate for the Élysée.

Hidalgo, who served as first deputy mayor of Paris in 2001-14 and has been mayor since 2014, was chosen to be the Socialist Party’s candidate in a party primary in October in which she received the support of 72 percent of the party members compared to 28 percent for Stéphane Le Foll, who was a member of the European Parliament in 2004-12 and minister of agriculture in 2012-17 and has been the mayor of Le Mans since 2018. Hidalgo has pursued an environment-friendly political agenda that, among other things, aims to make Paris 100 percent “bikeable” by 2026. Unfortunately, despite Hidalgo’s strong credentials as an environment-friendly mayor, the various ecology/green organizations and groups held their own primary and nominated Yannick Jadot, a Green member of the European Parliament, as their candidate. In 2017, Jadot was nominated by Europe Ecology–The Greens but withdrew in favor of the Socialist candidate.

Le Pen is, of course, the daughter of Jean-Marie Le Pen, the founder of the Front National. She succeeded him as leader of the FN in 2011 and ran as the FN’s candidate in the 2012 presidential election, receiving 17.9 percent of the vote in the first round. In 2015, in an effort to break with the party’s antisemitic past and make it more acceptable to voters in anticipation of the 2017 presidential election, she evicted her father from the party. In the 2017 election, she received 21.3 percent of the vote in the first round, second to Macron’s 24 percent, and thereby qualified for the second round two weeks later, which is limited to the two leading candidates in the first round. In the second round, she won 33.9 percent of the vote to Macron’s 66.1 percent. The magnitude of that second-round defeat undoubtedly contributed to her decision in early 2018 to replace the war-evoking and implicitly-divisive “Front” in her party’s name with the solidaristic-sounding term used in the name of the party created by Charles de Gaulle in 1947, the Rassemblement du peuple français (RPF)—a term that not only suggests a rally or gathering together of voters but also implies a relationship with the Gaullist tradition.

Pécresse has served in both the National Assembly and the government. She represented a constituency in Yvelines to the west of Paris in 2002-07 and served in the government of President Nicholas Sarkozy as minister of higher education and research in 2007-11 and minister of the budget and government spokesperson in 2011-12. She then returned to the National Assembly, where she served until 2016. She has served since 2015 as the president of the regional council of Ȋle-de-France. In the first round of the Républicains’ two-round primary to choose its candidate for the presidential election last Wednesday and Thursday, Pécresse was competing against several exceptionally strong candidates. Michel Barnier has served in the past as minister for the environment, minister of state for European affairs, minister for foreign affairs, and minister for agriculture; EU commissioner for regional policy and for the internal market and services, and, most recently, as the EU’s chief negotiator for the task force negotiating the exit of the UK and then as its chief negotiator of the EU’s post-Brexit trade relationship with the UK. Xavier Bertrand has served as president of the regional council of Hauts-de-France, the northernmost region of the country, and in that capacity has been dealing with both the continuing fishing dispute with the UK and the large camps of migrants in Calais and Dunkirk seeking, at great risk, to cross the Channel to the UK. She was also competing with Eric Ciotti, who has represented a portion of Nice in the National Assembly since 2007 and served as the president of the Alpes-Maritime department council in 2008-2017.

In the first round, Ciotti won 25.6 percent of the vote, Pécresse won 25 percent, Barnier won 23.9 percent, Bertrand won 22.4 percent and a fifth candidate won 3 percent. After the vote was announced, Barnier and Bertrand endorsed Pécresse and she won the run-off on Friday and Saturday easily, winning 61 percent of the vote to 39 percent for Ciotti.

It’s still very early days in the election campaign and much too soon to say who will win in April. But one thing can be said now: The April election won’t be the first in which a woman stands as the candidate of a major party. Le Pen, of course, was the FN’s candidate in both 2012 and 2017, and Ségolène Royal was the Socialist Party’s candidate in 2007 and won 25.9 percent in the first round and 46.9 percent in the second round against Sarkozy. But it will be the first in which the candidates of three of the major parties are women.