After Spain’s left parties agree on coalition, road to power goes through Catalonia 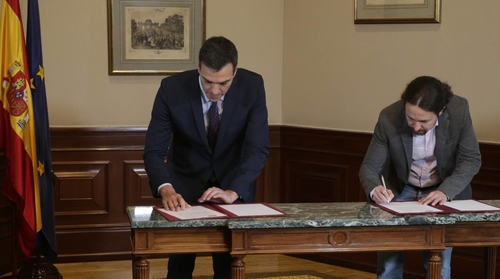 On Nov. 10, Spanish voters went to the polls for the fourth time in the last four years and, as happened in the elections in December 2015, June 2016, and last April, no party won a majority of the 350 seats in the Congress of Deputies. Nor, in the increasingly fragmented and polarized electorate, did there appear to be a coalition of parties, either on the left or the right, capable of commanding either the absolute majority — i.e., 176 votes — required on the first investiture vote when the new Congress convenes in December or a simple majority of those voting yes or no in subsequent votes. As a result, as the results of the election became known last Sunday evening, it seemed quite possible the voters would have to return to the polls yet again in the near future in order to end the continuing deadlock.

After last April’s election, PSOE and Podemos agreed to try to negotiate a coalition agreement that might enable them to govern, if not after the first investiture vote then, with the parliamentary support of a number of small regional parties, after a subsequent vote when the hurdle had been lowered from an absolute to a simple majority. But the negotiations dragged on for months and the parties were ultimately unable to reach an agreement on portfolios and policy. Podemos wanted to be an equal partner with PSOE in a coalition government — one in which it would hold some ministries and in which the government was committed to an agreed policy agenda. PSOE, on the other hand, wanted to govern alone, with Podemos simply providing it with support in the Congress. By early September, it had become apparent PSOE and Podemos wouldn’t be able to agree on a coalition and so a new election was called for Nov. 10.

Given that recent history, many were therefore surprised, even stunned, when Sánchez and Iglesias announced last Tuesday, less than 48 hours after the polls closed, that PSOE and Podemos had reached a preliminary agreement to form a coalition government. Yet their decision was hardly surprising given the fact that both parties had lost votes and seats in the election while the PP, and in particular Vox, had made substantial gains. It became clear to both that if they failed yet again to agree on a coalition, another election could bring the right — including Vox — to power. On Sunday evening, Sánchez called Iglesias, the next day they picked up the negotiations where they had ended in July, drafted the preliminary agreement, and publicly signed it last Tuesday. Under the agreement, Iglesias will become a Deputy Prime Minister and Podemos will receive several ministerial portfolios.

One of the issues that divided PSOE and Podemos in the negotiations after last April’s election and divided them in the recent campaign as well involved their proposed response to the continuing crisis over Catalonia. Podemos has argued that Catalonia has the right to hold a referendum on independence and has called for approval of another referendum like the one held in October 2017 despite the Supreme Court’s ruling that it violated the Spanish Constitution. PSOE, on the other hand, has opposed another referendum and has taken a tough line against those supporting independence. Sánchez approved Madrid’s use of its Article 155 powers to dismiss the Catalan government, take over control, and hold new regional elections after Catalonia declared its independence following the 2017 referendum. He accepts the view that a referendum on independence would, as the Supreme Court ruled, violate the Constitution and he has called for criminal penalties for officials who call an illegal referendum.

PSOE and Podemos papered over their differences with respect to Catalonia in the preliminary agreement, saying they would discuss “formulas for mutual understanding and common ground” and would seek a solution to the crisis “within the bounds of the Constitution.” Precisely what that solution will be — perhaps negotiation between a PSOE-Podemos government and the Catalan government over greater autonomy for Catalonia, perhaps agreement to move toward a federal constitution — remains to be seen. But we are likely to see what the parties will propose in the near future — indeed, even before the opening of the new session of the Congress of Deputies — for one important reason: Whether PSOE and Podemos win an investiture vote is likely to depend on whether the Catalan Republican Left (ERC), which has 13 deputies, decides to support or oppose a PSOE-Podemos government or abstain from the vote.

As of today, a PSOE-Podemos government can count on at least 158 votes in the new Congress of Deputies — the 120 PSOE deputies, the 35 Podemos deputies and the three deputies of the new Más País (More Country) party created by a former Podemos leader. They may win the support as well of the six Basque Nationalist (PNV) deputies as well as the single deputies of the Galician National Bloc (BNG) and the Cantabrian regionalist party (PRC), bringing their total to 166 deputies. They might also win the support of the five deputies of Basque Country (EH Bildu), a left-oriented Basque party and the two deputies of the Canarian Coalition but they are considered to be in the still-undecided column at this point. A PSOE-Podemos government will undoubtedly be opposed by the 89 PP deputies, the 52 Vox deputies, the 10 Cs deputies and, in all likelihood, the eight Together for Catalonia (JxCat) deputies and four other deputies representing two smaller parties — a total of 163 deputies. All of which means that if the 13 deputies of the Catalan Left (ERC) either vote for a PSOE-Podemos government or abstain from the vote, there will be a PSOE-Podemos government but if they vote against a PSOE-Podemos government there won’t be one. The ERC, like EH Bildu, voted in support of the motion of no confidence in the government of Mariano Rajoy that Sánchez put forward in June 2018, the approval of which led to Sánchez becoming prime minister, and it’s hard to imagine that either party would align itself with the PP, Vox and the Cs. But just to be sure, PSOE and Podemos are urging the ERC to at least abstain from the vote if it can’t vote in favor and they will no doubt shape their proposals about what a PSOE-Podemos government will do with respect to Catalonia so the ERC will, if not voting in favor of such a government, will at least abstain in the investiture vote rather than voting against it. The ERC has urged Sánchez to acknowledge publicly that the Catalan crisis is a political one. He has done that — while warning that if the ERC doesn’t at least abstain there could be yet another election, one that could bring the PP and Vox to power.

For the past two years, Spain has been shaken to its core by the Catalan crisis — first by the resurgence of support for independence expressed in the annual celebration of Diada, Catalonia’s National Day, in recent years, then by the Catalan government’s decision two years ago to hold a referendum on independence despite the Supreme Court’s ruling that such a referendum violated the Constitution, then by the overwhelming vote for independence in the October 2017 referendum and the subsequent declaration of independence, then by Madrid’s use of its Article 155 powers to dismiss the Catalan government and take control of the Autonomous Community, then by the arrests and trials of the former leaders of the Catalan government on charges of sedition and public fraud, and then, most recently, by the long prison sentences handed out to those leaders last month and the protests and violence in Barcelona and elsewhere that followed the sentences. It’s perhaps only fitting, therefore, that the road to power for PSOE and Podemos after their coalition agreement last week goes through Catalonia — indeed, as one commentator put it, through the cell in Barcelona in which Oriol Junqueras, the leader of the ERC and former vice president of the Catalan government, is imprisoned.