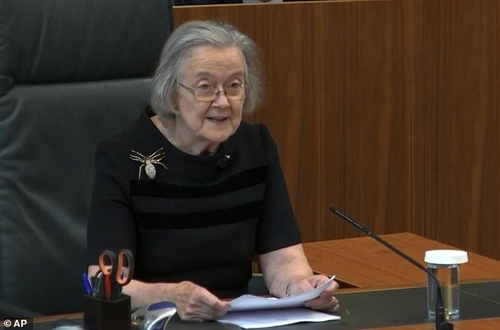 Extraordinary! Historic! Stunning! Those were the words that first came to mind yesterday morning as Lady Hale, the President of the UK Supreme Court, read the court’s unanimous decision that Prime Minister Boris Johnson’s advice to the Queen to prorogue, or suspend, Parliament from the week of Sept. 9-12 until a Queen’s Speech on Oct. 14, and the prorogation itself, were unlawful, outside the powers of the prime minister to give. Johnson’s advice, it said, was therefore “null and of no effect” and the Order in Council to prorogue the Parliament, founded on that advice, “was likewise unlawful, null and of no effect and should be quashed.” As a result, Parliament resumed its work this morning.

On Sept. 6, a panel of three senior judges of the High Court rejected Gina Miller’s appeal of the decision of a lower court that rejected her claim that Johnson had acted unlawfully in giving advice to the Queen to prorogue Parliament. In its 24-page judgment, the High Court said the advice, and the prorogation itself, were not justiciable: “The refusal of the courts to review political questions is well established…The prime minister’s decision that Parliament should be prorogued at the time and for the duration chosen and the advice given to Her Majesty to do so in the present case were political. They were inherently political in nature and there are no legal standards against which to judge their legitimacy.” The High Court noted, “it is impossible for the court to make a legal assessment of whether the duration of the prorogation was excessive by reference to any measure. There is no legal measure of the length of time between parliamentary sessions.” In concluding, it said, “the decision of the prime minister to advise Her Majesty the Queen to prorogue parliament is not justiciable in Her Majesty’s courts.” Miller, who had successfully appealed to the Supreme Court a High Court ruling in 2016 against her claim that the government could not inform the EU of the UK’s intention to leave without first obtaining the approval of Parliament, appealed to the Supreme Court.

On Sept. 11, a panel of three judges of the Inner House of the Court of Session in Scotland reversed a lower court decision that had dismissed the petition of Joanna Cherry, a Scottish National Party MP, and a cross-party group of more than 70 MPs and peers to review Johnson’s advice to the Queen to prorogue Parliament and, after doing so, declare that it was unlawful for him to advise her to do that in order to prevent sufficient time for proper consideration of the UK’s withdrawal from the EU. The lower court had ruled, as the High Court had, that the prime minister’s advice was, as a matter of high policy and political judgment, non-justiciable; his decision to present the advice couldn’t be assessed against legal standards by the court and it was therefore up to the politicians to settle the matter: “There has been no contravention of the rule of law. Parliament is the master of its own proceedings. It is for parliament to decide when it sits.”

Cherry et al appealed to the Inner House of the Court of Session, the highest court of appeal for civil matters in Scotland. That court reversed the lower court and concluded the decision to prorogue was justiciable and Johnson’s advice to the Queen to prorogue Parliament, and the prorogation itself, were unlawful. After noting that parliamentary scrutiny of government action “is a central pillar of the good governance principle which is enshrined in the constitution” and that any attempt to undermine that pillar would be unlawful, Lord Carloway, the Lord President, concluded “the circumstances demonstrate that the true reason for the prorogation is to reduce the time available for Parliamentary scrutiny of Brexit at a time when such scrutiny would appear to be a matter of considerable importance, given the issues at stake.” “The court,” he said, “is not dictating the days on which Parliament should sit. That is a matter for Parliament to decide. It is merely holding that a particular attempt to restrict the available days is unlawful.” He concluded the court should, for those reasons, “grant a declarator [a judicial declaration] that the advice to prorogue Parliament on a day between 9 and 12 September until 14 October, and hence any prorogation which followed thereon, is unlawful and thus null and of no effect.” The other two judges concurred in separate opinions.

The government appealed to the UK Supreme Court. In yesterday’s 28-page judgment, read in full by Lady Hale and Lord Reed, the Deputy President, the court noted two fundamental principles of the UK’s constitutional law that were relevant to the case – the principles of Parliamentary sovereignty and Parliamentary accountability. Parliamentary sovereignty, it said, “would be undermined as the foundational principle of our constitution if the executive could…prevent Parliament from exercising its legislative authority for as long as it pleased.” And after noting that the court held in the first Miller case that the principle of Parliamentary accountability is no less fundamental to the constitution than Parliamentary sovereignty and quoting a justice in another case that “the conduct of government by a Prime Minister and Cabinet collectively responsible and accountable to Parliament lies at the heart of Westminster democracy,” it concluded that “a decision to prorogue Parliament (or to advise the monarch to prorogue Parliament) will be unlawful if the prorogation has the effect of frustrating or preventing, without reasonable justification, the ability of Parliament to carry out its constitutional functions as a legislature and as the body responsible for the supervision of the executive.”

That established, the court said, “The first question, therefore, is whether the Prime Minister’s action had the effect of frustrating or preventing the constitutional role of Parliament in holding the Government to account. The answer is that of course it did…It prevented Parliament from carrying out its constitutional role for five out of a possible eight weeks between the end of the summer recess and exit day on the 31st October.” The next question, it said, “is whether there is a reasonable justification for taking action which had such an extreme effect upon the fundamentals of our democracy.” After noting the unchallenged evidence of former prime minister Sir John Major that preparing a Queen’s Speech typically takes four to six days and the government’s failure to explain why putting together a legislative agenda for a new session of Parliament would require five weeks, it said, “It is impossible for us to conclude, on the evidence which has been put before us, that there was any reason – let alone a good reason – to advise Her Majesty to prorogue Parliament for five weeks.” That being the case, the eleven justices concluded that Johnson’s advice to the Queen “was unlawful. It was outside the powers of the Prime Minister to give it. This means that it was null and of no effect…. It led to the Order in Council which, being founded on unlawful advice, was likewise unlawful, null and of no effect and should be quashed. This led to the actual prorogation.…It too was unlawful null and of no effect.”

As a result, the court said, “It follows that Parliament has not been prorogued and that this court should make declarations to that effect.” However, it said, “as Parliament is not prorogued, it is for Parliament to decide what to do next,” and said the Speakers of the House of Commons and House of Lords could take immediate steps to enable each House to meet as soon as possible to decide upon a way forward. Shortly thereafter, Speaker John Bercow said the House of Commons would resume its business this morning and it did so, beginning with a robust and extended questioning of Attorney General Cox in regard to his advice to the government that prorogation was constitutional and lawful.

In the wake of the Supreme Court’s decision, there have been many calls for Johnson to resign. In a long editorial this morning, the Financial Times said, “Faced with such a damning judgment, any premier with a shred of respect for British democracy and the responsibilities of his office would resign.” But of course he won’t resign. There is an obvious alternative – a vote on a motion of no confidence and then, if passed and in accord with the Fixed-term Parliaments Act 2011, either a vote of confidence within 14 days in a new government or a new election. One would think if there were ever a time for a vote of no confidence in a government, now is that time. But that probably won’t happen either. And so a government that has been found in the unanimous decision of eleven justices on the country’s highest court to have given advice to the Queen that was unlawful and that, acted upon by the Privy Council, gave rise to an Order that was unlawful that resulted in a prorogation that was unlawful will remain in office.

Meanwhile, with little progress having been made by the government in talks with the EU on a new withdrawal agreement that would, somehow, finesse the issue of the Irish backstop, and the credibility of the government greatly, and perhaps fatally, damaged both at home and in Brussels and the Article 50 clock continuing to tick steadily toward midnight on Oct. 31, the question now is whether Johnson will, in the absence of  a new withdrawal agreement and in accord with the recently-adopted European Union (Withdrawal) (No. 2) Act 2019, either persuade a majority of the House to leave the EU on Oct. 31 without a deal or will request an extension of the exit date to Jan. 31, 2020. There is no chance the House will approve a no-deal exit and Johnson says he won’t request an extension of the exit date. The crisis continues.