AKK resigns as CDU chair, and Germany and Europe wonder who will lead after Merkel 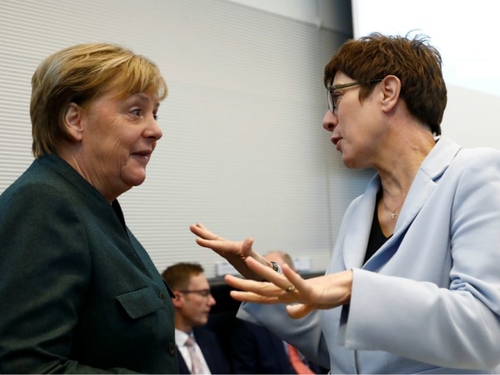 Last Monday, Annegret Kramp-Karrenbauer, German Chancellor Angela Merkel’s preferred successor, announced she will step down as the leader of the Christian Democratic Union (CDU) and won’t run as the party’s chancellor candidate in next year’s Bundestag election. Her decision, prompted by the decision of the CDU leadership in the eastern state of Thuringia several days earlier to disregard her direction not to join the right-wing, xenophobic Alternative for Germany (AfD) in supporting a regional leader of the small Free Democratic Party (FDP) for the position of minister-president of the state, is only the latest after-shock from the electoral earthquake that hit Germany, and the CDU in particular, in the wake of the massive inflow of refugees from the civil wars in Syria and elsewhere that began in 2013 and peaked in 2015-16.

Kramp-Karrenbauer, known colloquially as AKK, was first elected to the Saarland Landtag in 1999, subsequently held several ministerial positions in the state government and had been minister-president of the state since 2011 when she was nominated by Merkel in February 2018 to be secretary general of the CDU. She was elected to the position by a party conference later that month.

Kramp-Karrenbauer put herself forward as a candidate for the leadership at the party conference as did Friedrich Merz, a former leader of the CDU group in the Bundestag who opposed Merkel’s centrist tendencies, challenged her unsuccessfully for the leadership in 2002, quit the Bundestag in 2009 and was currently the chairman of the supervisory board of BlackRock’s German unit, and Jens Spahn, the minister of health who has been an exceptionally effective administrator of the complex health system but, like Merz, disagreed with Merkel’s immigration and economic policies. In the first round of voting, Kramp-Karrenbauer received 45 percent of the vote to 39 percent for Merz and 16 percent for Spahn, who was eliminated. In the second round, Kramp-Karrenbauer defeated Merz by a narrow margin, winning 52 percent of the vote. Last July, she replaced Ursula von der Leyen as minister of defense after the latter became president of the European Commission.

While a series of verbal gaffes in early 2019 reduced public support for Kramp-Karrenbauer as the CDU’s likely chancellor candidate in 2021, it was the party’s setbacks in last May’s European Parliament election and, especially, in three state elections last fall in eastern Germany that called her leadership of the party into question and contributed to a further erosion in support for her, both in the public at large and within the CDU. In last May’s EP election, the CDU and its Bavarian sister party, the CSU won 28.9 percent of the vote, a loss of 6.5 percentage points from the 35.4 percent the parties won in the 2014 EP election while the Greens nearly doubled their vote to 20.5 percent and the AfD’s vote increased from 7 percent to 11 percent.

After the 2014 state election in Thuringia, Bodo Ramelow, the leader of the Left (Die Linke), a left-of-the-SPD party that is a descendant of the old Socialist Unity Party (SED) of the Communist era, formed a Red-Red-Green coalition, consisting of the Left, the SPD, and the Greens, that had a bare majority of 46 in the 90-seat Landtag. In last October’s election, the Left won 29 seats, the SPD won eight seats, and the Greens won five seats—in all, 42 seats, not enough to win the absolute majority required on the first and second ballots. On the other side of the party spectrum, the AfD won 22 seats, the CDU won 21 seats, and the Free Democrats won five seats—in all, 48 seats, enough to win an absolute majority provided, of course, the CDU and FDP members were willing to cooperate with the AfD. Some in the CDU state leadership were quite willing to do that with the proviso that the AfD wouldn’t participate in the government, on the grounds that cooperating with the AfD was preferable to having the Left in power for another five years. But the federal CDU leadership—most notably, Kramp-Karrenbauer and Merkel—insisted that the regional CDU adhere to the party’s policy of non-cooperation with the AfD and keep it ring-fenced behind a political cordon sanitaire.

Kemmerich claimed, “The firewall to the AfD is still standing…There will be no AfD ministries, no co-operation and no AfD policies.” But notwithstanding those assurances, the vote set off a firestorm. Kramp-Karrenbauer said it was “a bad day for Thuringia and a bad day for Germany” and that Kemmerich should resign. Merkel said, “It was a bad day for democracy, a day that broke with the long and proud tradition of the CDU’s values. This is in no way in line with what the CDU thinks, how we have acted throughout our party’s existence.” Calling the regional CDU’s role in the election “inexcusable” and “unforgivable,” she insisted that the election be annulled. The next day, Kemmerich said he would resign and his party would seek the dissolution of the Landtag and a new election (something that would require a two-thirds vote), and on February 8 he resigned. Two days later, Kramp-Karrenbauer announced she was resigning as party chair and won’t be the party’s candidate for chancellor in 2021. She said she’ll stay on as party leader until a new leader is chosen at a party conference later this year and will stay on as defense minister through the government’s current term.

There are at least three obvious candidates for the CDU leadership. Merz will certainly run again and Spahn is likely to do so. And Armin Laschet, who has led the CDU in North Rhine – Westphalia and served as a deputy chair of the national organization since 2012 and has headed a CDU-FDP coalition government as Minister President since 2017, may run as well. But Merkel and Kramp-Karrenbauer will be in no hurry to call the party conference and will in all likelihood hold off until the end of the year, notwithstanding the desire of the SPD, the party’s coalition partner in the federal government, to resolve the issue quickly. For one thing, Merkel will not do any favors for Merz, a longtime rival who would like to abandon her “grand coalition” centrism and move the party to the right; delaying might at least enable Laschet or perhaps someone else more closely aligned to her centrist position to challenge Merz for the leadership. Also, she knows the party’s election of Merz as leader might cause the SPD, which has its own internal and electoral problems, to pull out of the government and force an early election, while the proverbial wind is still in the sails of the AfD.

Perhaps most importantly for Merkel and also Kramp-Karrenbauer, Germany will assume the six-month Council presidency of the EU on July 1—something that doesn’t come around every year. (In fact, with 26 other member states, the presidency won’t come around again for Germany until the mid-2030s.) At a time when the EU faces several exceptionally important, and exceptionally challenging, issues—most notably, concluding the multiannual financial framework for 2021-27 and negotiating the EU’s future relationship with the UK—Merkel, Kramp-Karrenbauer, and many others, no doubt believe the last thing Germany and the EU need between now and December 31 is a new election.

But whether the next election takes place this year or, as scheduled, in the early autumn of 2021, the CDU and CSU will have to address a more fundamental challenge posed by the recent electoral successes of the AfD: How to maintain the parties’ cordon sanitaire against the AfD and resist any temptation, such as occurred in the Thuringia on February 5, to cooperate with that party’s leadership while simultaneously drawing recent defectors to the AfD back to the CDU and CSU and retaining the support of those who might be inclined to defect—and doing so without resorting to the AfD’s xenophobic, racist and ultra-nationalist appeals. That, unfortunately, is easier said than done.