Bavarian Earthquake: Big losses for the CSU and SPD, big wins for the Greens and AfD 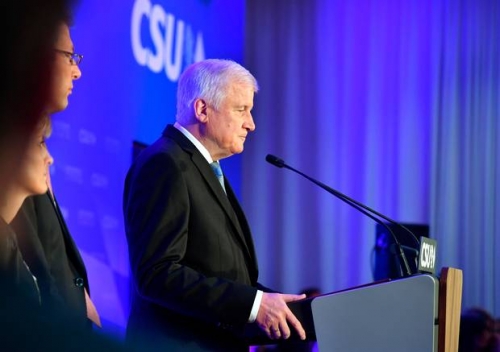 On Sunday, voters in Bavaria gave an overwhelming vote of no confidence in the Christian Social Union (CSU), which governs the state and, with the Christian Democratic Union (CDU), its sister party in the other German states, and the Social Democratic Party (SPD), the country. And the voters’ disaffection was not confined to the CSU; the SPD’s share of the vote dropped to the lowest level in any election since World War II.

For many years, the CSU has been the dominant party in Bavaria. Indeed, for more than 40 years, from 1966 until 2008, it won a majority of all of the seats in the Landtag, and in every election from 1970 until 2008 it won more than 50 percent of the vote. After suffering a dramatic defeat in 2008, when its share of the vote dropped from 61 percent in the previous election to 43 percent and it was forced to form a coalition with the Free Democrats (FDP), it clawed back some votes in 2013 and, after winning 47.7 percent of the vote, returned to its old habit of forming a majority government.

But on Sunday, the CSU suffered another substantial defeat, one that was even worse, in some respects, than the dramatic loss of support in 2008. It won only 37.2 percent of the vote, a loss of more than 10 percentage points from its vote in the 2013 state election and its smallest share of the vote since 1950. It is still the largest party by far in the state. But it won only 85 of the 205 seats in the new Landtag and will have to form a coalition with one or more other parties; it’s clearly a very long distance, electorally speaking, from the hegemonic position it enjoyed in the 1970s, 1980s and 1990s.

One might have thought this would have been a favorable moment for an incumbent party. After all, the German economy is doing very well and the Bavarian economy is doing even better. Bavaria has the third highest GDP per capita among the 16 German states, trailing only Hamburg and Bremen, has had the highest rate of economic growth of any state for the last several years, and has a rate of unemployment under 3 percent, the lowest in any German state.

But these, of course, are not ordinary times. The orderly world of German politics has been, if not altogether broken, at least shaken to its core by the massive inflow of refugees fleeing from Syria, Iraq, Afghanistan and elsewhere in recent years. According to the government’s Office of Migrants and Refugees (BAMF), Germany received 890,000 asylum seekers in 2015, 280,000 in 2016, and 187,000 in 2017—in all, some 1.3 million—and the inflow continues. It may be true, as Chancellor Angela Merkel famously said in August 2015, that “wir schaffen das” (“we can manage this.”). But it is also true that German domestic politics have been transformed by the magnitude of the recent immigration. Politics is no longer just about the conventional socioeconomic issues that pit left vs. right. It’s now complicated by the superimposition onto that longstanding cleavage of a new sociocultural cleavage involving religion, race, nationalism, and nationality that pits a xenophobic and euroskeptic right against a more cosmopolitan, humanitarian, and pro-European center and left.

A substantial portion of those who defected from the CSU appear to have supported the Alternative for Germany (AfD). The AfD first came on the scene in the federal election of 2013, in which it won 4.7 percent of the vote, narrowly falling short of the 5 percent threshold for obtaining seats from the party list in Germany’s mixed plurality-proportional electoral system. Initially a eurosceptic party concerned about the ongoing eurozone debt crisis and the possible consequences of that crisis for Germany, the party soon shifted its focus to the refugee issue, adopting a virulently xenophobic position in regard to the refugees and to Angela Merkel and her government for their welcoming stance toward them.

As it shifted its focus to immigration, the AfD attracted growing support in one state election after another, especially in the states in territory that once was part of the German Democratic Republic. In 2014 it won between 10 and 12 percent in the state elections in Saxony, Brandenburg and Thuringia, and in 2015 it won 5 to 6 percent in the state elections in Hamburg and Bremen. In 2016, in the wake of the massive inflow of refugees in 2015, it won between 13 and 15 percent in Rhineland-Palatinate, Berlin and Baden Württemberg and, in the east, 21 to 24 percent in Mecklenburg-West Pomerania and Saxony-Anhalt. Last year, support for the AfD receded to 6 to 7 percent in state elections in Saarland, Schleswig-Holstein, North Rhine-Westphalia and Lower Saxony, all of which are in western Germany. Nevertheless, thanks to its support in the east, where it won more than 20 percent of the vote—in Saxony, 27 percent, even more than the CDU—the AfD won 12.6 percent in last year’s federal election and not only entered the Bundestag for the first time but, after the formation of the CDU-CSU-SPD government in March, became the official Opposition in the Bundestag. On Sunday, in its first campaign for the Bavarian Landtag, the AfD won 10.2 percent of the vote and 22 seats, down slightly from the 12.4 percent it won in the state in last September’s federal election.

And adding insult to injury, the SPD is no longer the largest party on the center-left in Bavaria; the Greens more than doubled their share of the vote, from 8.6 percent and 18 seats in 2013 to 17.5 percent and 38 seats on Sunday. Ably led by 33-year-old Katharina Schulze, the Greens attracted not only a substantial portion of those who had previously supported the SPD but also some who had previously supported the CSU but were disaffected by its chase for the votes of the xenophobes and attracted by the Greens’ advocacy of support for the refugees, continued acceptance of migrants and support for European integration. Those positions were especially attractive to younger voters, including those who came to the polls for the first time on Sunday and contributed to the highest turnout of voters ever recorded in a Bavarian state election—72.4 percent, up from 63.6 percent in 2013.

While the Greens were the predominant beneficiary of defections from the more moderate portions of the CSU and from the SPD, they were not the only ones. The Free Voters, a center-right-leaning election association (but not a party) increased their share of the vote from 9 percent and 19 seats in 2013 to 11.6 percent and 27 seats on Sunday. Likewise, the Free Democrats, which formed a coalition government with the CSU when the latter lost its absolute majority in 2008 but then fell below the 5 percent threshold for representation in 2013, won 5.1 percent of the vote and 11 seats in the Landtag on Sunday.

Who will govern Bavaria in the wake of Sunday’s election remains to be seen. With 85 seats in a Landtag that will have 205 members, the CSU will be well short of a majority. Its first instinct might be to form a coalition with the Free Democrats, as it did after its dramatic setback in 2008. But a CSU-FDP coalition would be short of the minimum majority of 103. The CSU could, of course, surpass that minimum by forming a coalition with the SPD with its 22 members. But it’s not clear Bavarians would accept, let alone respect, a “coalition of losers.” If true, that would imply the CSU will have to look to either the Free Voters or the Greens as possible coalition partners. CDU-Green coalitions currently govern in neighboring Baden-Württemberg and in Hesse. But the CSU is not the CDU and it seems doubtful, given the distance between them on the issues of immigration and refugees, that the Greens would agree to govern with the CSU. So by process of elimination, the new government will probably be a CSU-Free Voter coalition with or without the Free Democrats.

This was a Bavarian election. But it was also an election about Berlin—one in which the big losses and big gains were largely driven by the disaffection across the ideological spectrum with the parties that form the federal government and the policies those parties have advocated. The two big losers were the parties that, with the CDU, form the federal coalition government, and the two big winners were the parties that most forcefully challenged those parties and policies. Those angry at Merkel and Berlin for the massive inflow of refugees and the government’s refusal to stop immigration or strengthen border controls, as Horst Seehofer, the former Minister President of Bavaria, current leader of the CSU and, since March, federal Minister of the Interior, proposed but rescinded under pressure from Merkel and the CDU, found a voice for their anger in the AfD. And those who either disapproved of the CSU’s efforts to compete with the AfD for the xenophobe vote or, in the case of former SPD supporters, are still angry about its decision to remain in coalition at the federal level with the CDU and CSU and disapprove of its willingness to tolerate Seehofer’s rhetoric about “asylum tourists,” his deportation of asylum seekers, and his efforts to impose border controls found a voice for their anger in the Greens.

And because the Bavarian election was also an election about Berlin, it will undoubtedly have consequences for the federal government as well as for Bavaria. It’s much too soon to say, one day after the election, how and in what ways the magnitude of the losses suffered by the CSU and SPD in Sunday’s election and the reasons for those losses, will affect the relations between the three parties that comprise the federal government. But there can be little doubt that the outcome will further complicate the often-difficult relationship between the three parties, especially in regard to immigration policy. And in the meantime, Germans now confront the unpleasant fact that, in the wake of Sunday’s election, they are now governed by a “coalition of losers.”