Blue wave knocks down the red wall and UK will leave EU on Jan. 31 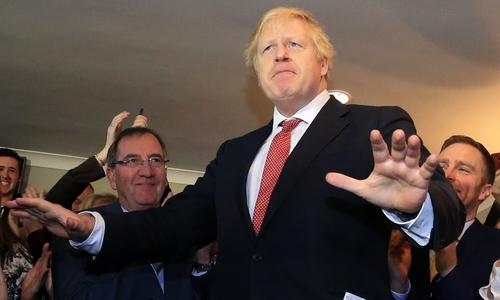 It had been apparent for some time to those who followed the polls throughout the election campaign that Boris Johnson’s Conservatives would in all likelihood win a majority in the House of Commons last Thursday. But even they were stunned by the size of the Conservative majority and, conversely, the extent of the defeat suffered by Jeremy Corbyn’s Labour party. There will be more Conservatives in the new House this week than any time since Margaret Thatcher’s landslide elections in the 1980s. And there will be fewer Labour MPs in the new House than at any time since World War II.

As usual, the Conservatives did best in the English constituencies, winning 47.2 percent of the vote, a gain of 1.7 percent compared with their vote in the 2017 election, and 345 seats, a gain of 48. In contrast, Labour won only 33.9 percent of the vote, a loss of 8 percent, and 180 seats, a loss of 47. What was most noteworthy about the Conservative gains and Labour losses was the fact that the Tories picked up seats in the Midlands and North many of which had been safe Labour seats for decades — in some cases stretching back to the 1930s. In the Northeast, Labour’s vote dropped by 13 percentage points and in Yorkside & Humber by 10 percent. Clearly, the combination of disaffection with Corbyn’s leadership, Labour’s unambiguously leftist program, its ambiguous position about Brexit and/or a second referendum, and Johnson’s three-word mantra — Get Brexit Done — moved substantial numbers of voters, including working-class voters — especially working-class voters in constituencies that voted for Leave in the 2016 referendum — who had never before voted for the Conservatives to do so. A blue wave of support for Conservative candidates knocked down large parts of the “red wall” of Labour support in the Midlands and North. Sedgefield, Tony Blair’s old constituency, fell to the Tories for the first time since the 1930s as did Blyth Valley, solidly Labour for the past 70 years. Wakefield, a Labour stronghold since the 1930s, Stoke-on-Trent, Bishop Auckland, and many others went from red to blue. In Wales, Labour won 40.9 percent, a loss of 8 percent, and 22 seats, a loss of six, while the Conservatives won 36.1 percent, a gain of 2.5 percent, and 14 seats, a gain of six.

Unlike the outcome in England and Wales, in Scotland both the Conservatives and Labour lost votes and seats. The Conservatives won 26.1 percent, a loss of 3.5 percent, and six seats, a loss of seven, while Labour won 18.6 percent, a loss of 8.5 percent, and won only one seat, a loss of six. The big winner in Scotland was the SNP, which won 45 percent, a gain of 8.1 percent, and 48 of the 59 seats, a gain of 13. After the election, Nicola Sturgeon, Scotland’s First Minister, said the election result gave the Scottish government a mandate to hold another referendum on independence and said that in a phone conversation with Johnson after the election she had told him the same thing, to which he had replied that Scotland had already decided that question when 55 percent had voted “No” when asked in the September 2014 referendum whether Scotland should be an independent country. But 62 percent of the Scots voted in the June 2016 referendum to remain in the EU — a vote which, Sturgeon had said at the time, put independence back on the table in light of the overall vote in favor of Leave. Independence clearly remains on the table today and will no doubt remain on the table after the UK leaves the EU and in the run-up to the next election of the Scottish Parliament, scheduled for May 2021. The challenge for the SNP will be whether it can mobilize a majority in favor of independence either in that election or, alternatively, in a non-binding advisory referendum —something it hasn’t been able to do thus far, having won 45 per cent in favor of independence in 2014, 46 percent in the May 2016 election for the Scottish Parliament, and 45 per cent last Thursday.

The newly-elected MPs arrived at Westminster today. Tomorrow they will elect the new Speaker, Sir Lindsay Hoyle, and take their oaths of office. On Thursday, they will be summoned to the House of Lords for the state opening of Parliament and the Queen’s Speech, largely a repetition of the October speech but accompanied by a commitment to heal the divisions created by Brexit and give substance to the “one nation” vision Johnson articulated in the campaign. On Friday, the last sitting before the two-week Christmas recess, the House is expected to complete the Second Reading of the Withdrawal Agreement Bill that will incorporate into UK law the provisions of the Withdrawal Agreement, including the modified Protocol on Ireland/Northern Ireland, negotiated by the UK and the EU. Parliament will return on Jan. 6 and complete its approval of the WAB, and at 11 p.m. (midnight in Brussels) on Jan. 31 the UK will leave the EU.

And then comes the hard part — negotiating the UK’s future relationship with the EU and doing so by the end of 2020. In the revised Political Declaration setting out the framework for their future relationship, the EU and UK said they intend to create “an ambitious, broad, deep and flexible partnership across trade and economic cooperation with a comprehensive and balanced Free Trade Agreement at its core, law enforcement and criminal justice, foreign policy, security and defence and wider areas of cooperation.” The FTA “will create a free trade area, combining deep regulatory and customs cooperation, underpinned by provisions ensuring a level playing field for open and fair competition” in which there are “no tariffs, fees, charges or quantitative restrictions across all sectors with appropriate and modern accompanying rules of origin and with ambitious customs arrangements.” In addition to dealing with trade in goods, the agreement will include “an ambitious, comprehensive and balanced arrangement on trade in services and investment in services and non-services sectors….and a level of liberalization in trade in services well beyond the Parties’ World Trade Organization (WTO) commitments and building on recent Union Free Trade Agreements (FTA).” The Declaration goes on to discuss negotiation of arrangements covering financial services, digital commerce, capital movements and payments, intellectual property, public procurement, mobility of persons, transportation, energy, fishing, global cooperation, law enforcement and judicial cooperation in criminal matters, and foreign policy, security and defense.

The Conservatives’ election manifesto states unambiguously, and Johnson reiterated on numerous occasions during the campaign, that the government will complete the negotiation by Dec. 31, 2020 and will not request, as the Withdrawal Agreement allows, an extension beyond that date of the transition period during which the UK, although no longer a member of the EU, will remain in its Single Market and Customs Union and continue to make an annual payment for the EU budget. The Withdrawal Agreement stipulates that the transition period will end on Dec. 31, 2020 unless the UK requests and the EU grants, by July 1, 2020, an extension to Dec. 31, 2021 or Dec. 31, 2022. On Sunday, Michael Gove, the Chancellor of the Duchy of Lancaster and, in that capacity, head of the Cabinet Office, reiterated again that the UK will complete the negotiation by the end of 2020.

But it’s wildly unrealistic to imagine that the UK and EU can negotiate an agreement of the breadth described in the Declaration in eleven months. It took more than five years for Canada and the EU to negotiate their 454-page Comprehensive Economic and Trade Agreement (CETA). That negotiation began in May 2009 and concluded in August 2014, was signed in October 2016, and took effect, provisionally while being ratified, in September 2017. It took almost five years for Japan and the EU to negotiate their 550-page Economic Partnership Agreement. That negotiation began in March 2013 and concluded in December 2017, was signed in July 2018, and entered into force last February. And as complicated as those agreements were, both were much less complicated than the UK-EU agreement outlined in the Political Declaration — which means that if the UK doesn’t request an extension of the transition period to the end of 2021 or 2022, it will in all likelihood have to agree to a sequential consideration of the many issues before the negotiators and an initial FTA that is less comprehensive than the one outlined in the Declaration. That would probably mean an FTA limited to trade in goods, despite the fact that services account for a much larger portion of the British economy and British trade. As Michel Barnier, who was the EU’s chief negotiator of the Withdrawal Agreement and will continue as its chief negotiator of the FTA, recently said, “It is unrealistic that a global negotiation can be done in 11 months, so we can’t do it all.”

The UK will leave the EU on Jan. 31. And on Feb. 1, the hard work for Johnson and his government will begin — replacing the divisions generated by Brexit with policies that give substance to the old Tory “one nation” vision, addressing Scotland’s concerns while rejecting its demand for a new independence referendum, and negotiating the UK’s future relationship with the EU. They have five years. Will they succeed? We’ll see.