Brexit expert Bogdanor on “Britain and Europe in a Troubled World” 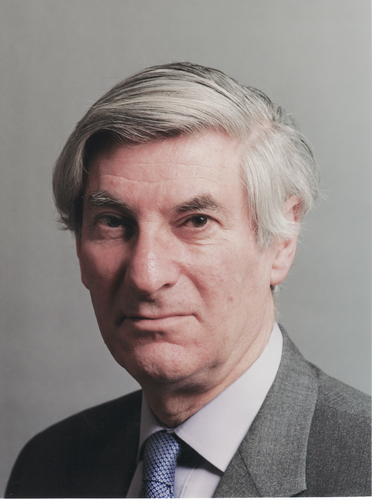 The MacMillan Center and Yale University Press hosted Vernon Bogdanor CBE for a series of four lectures on “Britain and Europe in a Troubled World” for the Henry L. Stimson Lectures on World Affairs earlier this month. Bogdanor is an expert on Brexit and one of Britain’s foremost constitutional experts. He is a Professor of Government at the Institute for Contemporary British History at King’s College London and Emeritus Professor of Politics and Government at the University of Oxford.

The first lecture on April 8 introduced the special relationship between Britain and the European continent. In the talk, titled “Reserve but Proud Reserve. Britain Detached from Europe,” Bogdanor placed the European Union within a historical context and introduced ideas of nationalism, sovereignty, and identity. He noted that the “European Union was and remains a peace project.” Created after the two world wars, the European Union sought to ensure collective security and mutual interdependence. Bogdanor then argued that although nationalism was viewed in the 19th century as a liberal force, “the 20th century has been inhospitable to the hopes of liberal nationalism.”  (view lecture)

Describing the history of Britain’s detachment from the continent, he discussed Britain’s lack of involvement in the formation of the European Union, as well as Britain’s identity as an imperial power rather than a European one. Noting that British consciousness has been largely defined by moments in history when Britain stood alone against the continent, Bogdanor suggested that “perhaps Europe looks more united to Americans than to Europeans themselves.”

The next lecture on April 10, titled “The Pandora’s Box and the Trojan Horses. Britain in Europe,” addressed Britain’s entry into the European Union in 1973. Far from being just a recent issue, Bogdanor argued that the Europe issue has destroyed the careers of the last six conservative Prime Ministers—Harold Macmillan, Edward Heath, Margaret Thatcher, John Major, and David Cameron. The reason the issue has been so toxic is that it involves “fundamental problems of identity and sovereignty that strike at the very root of the British conception of themselves.”  (view lecture)

He noted that, in contrast to the original six founding members who believed in a shared destiny, Britain joined because “she ran out of alternatives… to avoid further stepping down from her international positions.” In addition to issues of sovereignty, the costs of joining included agricultural and commercial concerns. He noted how Britain, having a smaller agricultural sector, would be subject to more levies than other European nations, and how the “cheap food” policy on imports from the commonwealth would have to end, potentially leading to an increased cost of living. “The word ‘negotiation’ is somewhat of a misnomer… for all the countries that have sought to enter the European Union,” Bogdanor explained. He described how “the Europeans work out their position and present their proposal” to the applicant, who can then decide whether to accept those conditions.

In his third lecture on April 15, titled “Brexit means Brexit. Britain out of Europe,” Bogdanor sought to explain why the British people are not committed to Europe. He argued that the definitively positive outcome on the 1975 referendum on whether the United Kingdom should remain in the European Union was due to fear of leaving rather than a desire to remain. Emphasizing the historical importance of Brexit, he noted that the negative result of the 2016 referendum by a narrow margin meant that “the House of Commons, for the first time in its history, is enacting legislation in which it did not believe.”  (view lecture)

Bogdanor explained the influence of Margaret Thatcher’s 1988 Bruges Lecture which he claims has “attracted iconic status among eurosceptics.” As a response to European Commission President Jacques Delors’ speech to the European Parliament pushing for a supranational Europe, her speech (as explained by Bogdanor) warned that economic liberty has been “undermined by the development of monetary union and proposals of a common currency” in the European Union. Bogdanor was careful to point out that Thatcher was not anti-European, though her conception of Europe was more an intergovernmental corporation rather than a supranational organization. He criticized Thatcher’s push for an internal European market, arguing that it was “not possible, in my opinion, to make the distinction between the creation of a single market and further integration. The single market requires integration.”

Bogdanor argued that the 2008 credit crunch likely sparked a crisis of economic and political liberalism. Until 2008, he said, “politics in Britain and many other democracies was largely dominated by economics… After 2008, politics came to be dominated by questions of identity.” The financial crash benefited the right more than the left, and “gave rise to a mood which is radical and anything but conservative.” Noting that around 60% of British people live within 20 miles of where they grew up, Bogdanor argued that they felt alienated from the elite and their long-governing internationalist doctrine. “The referendum was an opportunity to display that anger,” he said.

The goals of the voters and that of the Brexit political leaders are not aligned, Bogdanor warned. With the 2016 referendum— “an emphatic repudiation not only of the government but of the political class as a whole”— voters sought job security and protection against the market forces of globalization. On the other hand, Brexit campaign leaders, with the exception of UKIP, sought to oppose the social protection of Jacques Delors’ supranational Europe rather than globalization. The view of these leaders “is bound to prevail” and result in “a radical shrinking of the state, which is likely to disadvantage those very voters who believed Brexit would protect them from the excesses of globalization,” he said.

Finally, Brogdanor’s fourth lecture on April 17 addressed the theme “Never Closer Union. Does the EU Have a Future?” He began by arguing that far from being a purely British phenomenon, Brexit reflects the anxiety of other EU member states. French President Macron, Bogdanor noted, admitted that he could not guarantee the outcome of such a referendum if one were held in France.  (view lecture)

He discussed the European Union’s “democratic deficit,” or crisis of democratic legitimacy, especially in the eyes of the British for whom direct representation is a cornerstone of their identity. The members of the European Commission, unlike the European Council or the Parliament, are not elected but appointed. Bogdanor agreed with a proposal to place the Commission as a secretariat under the Council, which represents member states. He argued, “such as reform would do much to undermine euroscepticism which thrives on the anathema of an unaccounted body of officials exercising the legislative power.”

In addition to the democratic deficit, Bogdanor contended that Europe faces a “defense deficit.” He noted that Europe is the only one out of the four power groupings in the world (the others being the United States, Russia, and China) that is unable to defend itself and relies on an outside power, the United States. Given that the United States contributes 72% of NATO’s defense spending and is shifting its interest toward Asia and the Pacific, Bogdanor emphasized the necessity of a European defense policy, which he admits is unlikely in part due to the pre-existing structure of NATO.

He said, “For effective defense, the units to be defended must see their separate interests as subordinated to a common good.” He goes on to explain that superficially providing a label of a European defense policy by officials is not enough. In Bogdanor’s view, there is a strong argument for “NATO to become a two-pillar alliance with a strengthened European intergovernmental pillar,” an arrangement that is unlikely without Britain, one of two nuclear powers in Europe. On the possibility of Franco-German leadership in Europe, Bogdanor was skeptical, pointing to their subpar contributions to NATO defense spending, as well as Germany’s reluctance to lead.

Arguing that Britain is part of “liberal Europe,” Bogdanor fears that Brexit will weaken the forces of economic and political liberalism on the continent and shift power in the direction of populists. “There is a striking absence in Britain of neofascist or Islamophobic parties able to win parliamentary support. There is no British equivalent to the Front National, the Alternative für Deutschland, or the Sweden Democrats,” he said.

Before concluding, he reminded the audience that the European Union is not a political or economic project, but a peace project. “One important factor, perhaps the prime factor, preventing open warfare between Muslims and Slavs, between Kosovo and Serbia, was the desire of both countries to join the European Union,” he said. Bogdanor went on to describe how the European Union acts as a “roof” over the Balkans and prevents violent conflict.

Bogdanor noted that the assassination of Archduke Franz Ferdinand in the Balkans engulfed the world in conflict for almost the entirety of the 20th century. As the post-war generation disappears, he remarked, “so also there has disappeared that sense of the fragility of international order… Now, as in the era before 1914, there are siren voices saying that the international order would benefit from a shakeup, and that any disturbance to it could be kept well under control.”

Pointing to an observation made by Christine Lagarde, the Managing Director of the International Monetary Fund, regarding a structural disconnect between economic and political structures, Bogdanor explained, “While the global economic system is becoming increasingly integrated, the global political system is fragmenting and becoming more so because of the backlash against globalization.”

He left the audience with a quote by French President François Mitterrand: “Le nationalisme, c’est la guerre.” (translated as “Nationalism is war.”)