Bringing Brazilian Music to Yale and Beyond - Interview with Stephen Guerra 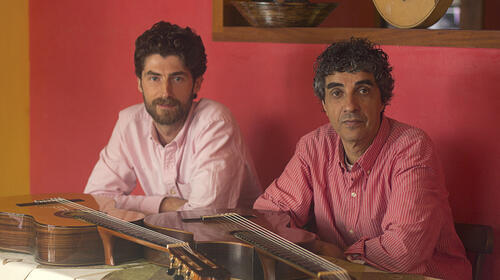 Bringing Brazilian Music to Yale and Beyond - Interview with Stephen Guerra

This Saturday, September 24th at 4 pm, at the Luce Hall Auditorium, Stephen Guerra and Rogerio Souza will perform music by the famous Brazilian choro musician Alfredo da Rocha Viana Filho, known as Pixinguinha. Learn more about Stephen, Rogerio, and the choro tradition in this interview.

Alan Mendoza: How did you become interested in music?

Stephen Guerra: I was probably in my early twenties, doing a bachelor’s in systems engineering. During that time, I got really into literature and music. The portal there was classic rock, to which my friend’s group introduced me. I also had a girlfriend that introduced me to romantic era classical music too. That was the starting point, and then I got attracted to guitar, and that pivoted very quickly into Spanish Flamenco music. I then started teaching myself. I went to a local pawn shop, gave them the electric guitar I had and took a classical instead, to start teaching myself flamenco. A year later, I heard Brazilian music for the first time and then I just felt into the whole genre.

AM: And how does your engineering background translate into the music?

SG: I ended up in engineering because my mathematical skills were always higher than my verbal skills in tests about my learning abilities. So, I was nudged in the direction of engineering, and I do have a mind for patterns and systematicity. After going through another undergrad in music and then doing a doctorate in music theory studies, I gravitated toward more systematic theory, which involves representing musical ideas through mathematics. So, I don’t know if my engineering background influences what I compose, but it is certainly a very prominent aspect of me.

AM: Definitely, I can see that connection between math and music. So, what do you like about Brazilian music?

SG: I started hearing a little bit of Brazilian Bossa Nova music, but when I was finishing my Engineering dissertation, I was listening to internet radio and somehow the algorithm went to Baden Powell. It went to a recording by him and was just absolutely fascinated. There was something about the sonority of his guitar that I hadn’t heard in any of the other music. I was listening to any music that had guitar from around the world, including flamenco, in Central West Africa, Latin America, Spanish Classical. But there was something in Baden Powell’s guitar that was very different and really caught me.

AM: Yes, Baden Powell also popped up in Spotify radio, and I was utterly captivated by his music too. So you and Rogerio are collaborators, right?

SG: Yes, we met in a California-Brazil Camp, which happens annually. For two weeks they bring in renowned musicians from Brazil to teach students, so there I met Rogerio. He likes to tell the story with his friends that once super early in the morning I was in the terrace playing scales, he might have had a hangover and went up the stairs to see who was playing so early, and that’s how we met. Then I found out that he had played with Baden Powell, and that he loved him. He transcribed all his music, and they were going to record with him, but he died. So, he and his brother worked in a recording album with Powell, so that was the beginning, sharing those similar interests. Then I went to Brazil to study with Rogerio that following summer, and then I went again the summer after that, while I was also doing my doctorate at Yale. And a lot of what I did in Brazil influenced the research and informed the research that appeared in my dissertation.

AM: So, you play together at the moment, right?

SG: We do. We are going to play in Buffalo, where I am teaching and then we’ll be down in Georgetown after our event in New Haven. We are at the beginning of this partnership.

AM: Great! Going back to your time at Yale, how do you think that the PhD impacted your music and your approach to music and how does that reflect in what you do now and in what you want to do in the future?

SG: What I experienced at Yale was a little strange. On the one side, I was a little ostracized by people in the Yale Music School and also folks in the Music Department, the type of folks who represent the old guard on what is “real” music, what is “good” music. That pushed me to become more extreme in a way. I committed myself ever more to performing this music, to learning about it, to learning the language.

AM: What do you mean by “more extreme”?

SG: To explore music further away from classical music, farther away from the core of what doctorate-level studies consider. They have long focused on “art music,” and a very circumscribed repertory. There’s that aspect. But then the other side of that is that Yale was a tremendous boon. Yale has a great many resources. It was the first school I’ve been to that actually had a Portuguese program. So, I took every course that I could, the entire language core sequence as well as the more advance levels. They had a FIELDS language scholarship program through advanced studies, so I was paired up with a law student from Brazil. Then, of course, there is the money that Yale has to support international dissertation research. All of these resources were extremely valuable in helping me personally to develop my research an creativity within this foreign tradition and also to bring in that tradition to the undergraduate students at Yale. We’ve done significant outreach, and I’m very proud of that, in different colleges, reaching hundreds of undergraduate students.

AM: What is the reception like? How do students take in these approaches to music?

SG: I’ve only ever seen happy faces. The great difficulty is getting students there initially, but once they are there, they really like it. The American marketing machine is exporting the music that it wants the world to be listening to, to be streaming. In a way we are fighting against that too. There are many other extraordinarily rich musical traditions around the world.

AM: Could you expand in very broad terms on the history of choro? Where it comes from and what is distinct about it?

AG: The typical story is that if it had not been for Napoleon there would not be this music. It’s because he went to Portugal, and then the court and the king fled and took up in Rio, and they brought all their musical materials to Rio. Then a little bit later you have abolition and slave migrations from plantations to city centers, one of which was Rio. So you have former slaves playing music from European tradition but in their own way. Then, choro began as a style and approach to playing that then turned into a genre. It’s around 1850 mid-nineteenth century when it starts and it continues today, live and well. It is a largely composition driven music, which means that there are famous tunes, but the name of the composer is remembered. For example, there are all the great tunes y Pixinguinha, which is what we are playing at the Yale Concert, so it is a composer driven repertory, in contrast to other types of music, whose composers are not remembered.

AM: Why did you choose Pixinguinha for your concert?

SG: Because Pixinguinha is so foundational to the genre. There’s a joke that if you had all the volumes of the Encyclopedia for Brazilian music and if you wanted to slim it down to just one volume it would just be about Pixinguinha. He is really considered the consolidator of the style. The idea is to share the music to that foundational person. Also, because during the pandemic Rogerio had been arranging various of these foundational composers and Pixinguinha was one of them. So, that’s the core. But we always lime to dress that, so it’s not only Pixinguinha that we are playing. We are also playing some of his contemporary players, some of his bandmates, but also people he in influenced. The fact that it is a composer-driven repertory allows you to tell stories like that. And then we are also including one or two of our own compositions to show where the genre is today.

AM: Can you expand on how the choro tradition reflects in your music?

SG: Well, I write inside the tradition. I expect my compositions to be accepted in the tradition. What that means is that other people record them or they play them in jam sessions. I also do things that push the harmonic conventions in various ways, but I very much answer to rhythmic phrasing conventions and formal conventions.

AM: And to wrap up, what projects are you working on right now? Either creative or intellectual ones?

AG: Since the beginning of 21, I have been composing music in the choro style. I recorded some demos this summer, with Rogerio and other people in the Rio area. The idea is to turn these into an album. I have 19 of these, way more than I need for an album. Another project is taking a number of those and creating music minus one arrangements for Mel Bay. I’ve already published a book with Mel Bay. This would be the second book. They’ve already given me the green light. Then, academically, I am attending the MEGA conference this November, giving a presentation about one of my compositions vis-à-vis theories of European harmony, loke 19 hundreds and later, and then also vis-à-vis the choro tradition.