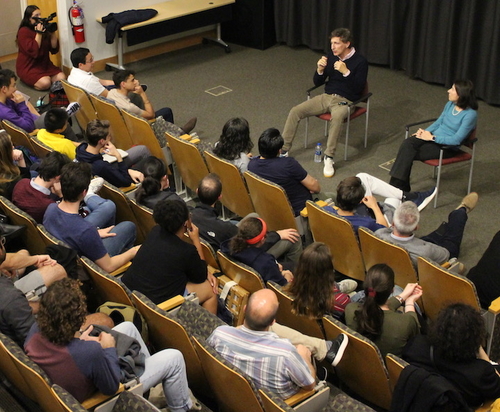 On October 23, the European Studies Council of the MacMillan Center held a special screening of the 2017 film, Call Me by Your Name. Following the screening, producer Peter Spears fielded questions from audience members. The Q&A session was moderated by Julia Titus, Senior Lector in the Department of Slavic Languages and Literatures.

Spears spoke to a packed auditorium of members of the Yale community. Many questions from the attendees concerned the cinematography and the production process. Spears discussed how the production team made artistic choices that stayed true to the time period and geographic location.

“Before we started shooting,” he said, “the costume designer and [the director] Luca had sent out a notice to all the residents of the town of Crema. ‘We’re going to shoot this movie set in 1984. Could you give us all your photographs from that time?’ Everyone handed in their photos, so we had that as a resource.”

Spears further expressed his satisfaction with the adaptation from the novel to the film. “The movie doesn’t become a mirror of the book, but becomes its own thing that lives as its own experience,” he said.

Regarding how the film relates to its viewers, Spears explained that while he expected Call Me by Your Name to resonate with the queer community, the movie was actually intended for all audiences. He stressed the “general sense of a story of first love,” a commonality that can be present in any love story.

Spears pointed out that, for many years prior to 2017, whenever a queer movie would occasionally break through, there was a pressure for it to speak to every queer person’s experience. “That’s an impossible thing to do if you want to tell an authentic and truthful story,” he said. He explained that 2017 was an especially productive year for queer cinema, and as a result, there was less pressure on Call Me by Your Name to represent every facet of the queer experience. He emphasized that none of the production team’s decisions about the movie were strategic.

In addition, Spears cited viewer feedback such as “I wish [the father in the film] was my father” and “I want to be that kind of parent.” He further described the reaction of his family members and friends. While he already knew they were progressive and open-minded, he said that the movie made them realize that love is not a matter of being “different but equal.”

“Love is exactly love in all its components and nuances, whether it’s straight or gay,” Spears concluded.

Call Me by Your Name won the Oscar for best adapted screenplay.