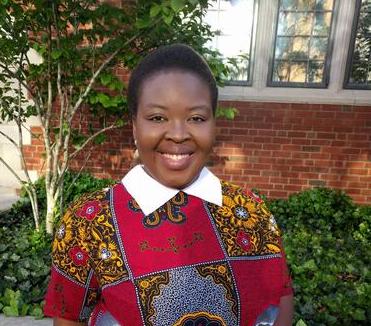 Marius Kothor, a Ph.D. candidate in the Department of History and Council on African Studies (CAS) Graduate Affiliate has been awarded the Mellon International Dissertation Research Fellowship (IDRF) by the Social Science Research Council, the Fulbright IIE award, and the Fulbright-Hays Doctoral Dissertation Research Abroad (DDRA) fellowship. All three awards offer nine to twelve months of funding to graduate students to conduct dissertation research in whole or in part, outside the United States. Marius’ work focuses on the political and economic contributions of women traders to Togo’s independence movement, and how Togo’s anti-colonial struggle informed Black American discourses on African decolonization movements in the mid-twentieth century. Her research employs a variety of sources including archival documents, oral histories, newspapers, photographs, and textiles. She spoke to CAS about her dissertation research and an edited version of the conversation follows:

Can you tell us about your dissertation research?

Broadly speaking, my research traces the anti-colonial activism of women traders across the borders that separate contemporary Togo and Ghana. I focus specifically on a group of women cloth traders known as the Nana Benz. Beginning in the mid-twentieth century, the Nana Benz built a massive commercial fortune by distributing European manufactured textiles throughout Central and West Africa. The women became so wealthy that they were the first people to import the Mercedes Benz into Togo, and so they became known as the Nana Benz. My project explores the Nana Benz’s political and economic contributions to the anti-colonial movements in the region by examining their monetary donations to the campaigns of anti-colonial nationalists and their efforts to mobilize various communities to join the fight against British and French colonial rule.

Although many people today think of the Nana Benz as a Togolese phenomenon, their lives and political activism transcended the borders of contemporary Togo. Before their involvement in Togo’s decolonization movement, many of the women were active in the Ewe Unification Movement. They challenged the ways the British and French colonial powers drew arbitrary borders which divided Ewe-speaking communities between what was then British Togoland, French Togoland, and the Gold Coast Colony. These borders separated the women from their families and the imperial invention of new customs fees and currencies made their trading activities more challenging. Despite the women’s activism, the Ewe Unification Movement was ultimately unsuccessful. In 1956, the British colonial government incorporated British Togoland into the Gold Coast Colony which became the independent nation of Ghana in 1957. This was a decisive blow to the Ewe Unification Movement and many of the Nana Benz redirected their attention towards ensuring that French Togoland gained independence, which it did in 1960. The Nana Benz’s anti-colonial activism also has an American component. In the 1960s, some of the women were depicted as the embodiments of Black feminist liberation in African American magazines and newspapers. Because of the Nana Benz’s movements across various borders, their linkages to international trading firms, and their connections to black feminist discourses, my research spans across three different continents.

How will these fellowships support your research?

Receiving these three fellowships is a huge honor. I am happy that the granting agencies saw the importance of telling the stories of the Nana Benz in the ways I plan to do in my dissertation. The funding from these fellowships will allow me to do archival research in regional and national archives in Ghana and Togo and the colonial archives in France and the United Kingdom. While in West Africa, I will also conduct oral historical interviews with the relatives and close acquaintances of the Nana Benz who currently reside in Togo and Ghana. Since most of the Nana Benz have passed away, I rely on information from their families and friends to help me understand important details about their lived experiences. This will be in addition to the archival research I will do on African American organizations and periodicals in the United States. I am not able to hold two Fulbright awards at the same time; however, I can combine the SSRC with one of the Fulbright awards to ensure that I will be able to spend a full year abroad in Africa, Europe, and the United States to complete my dissertation research.

How has the ongoing pandemic affected your research?

It has been challenging because I was initially supposed to leave for Togo and Ghana in August. At this point, it is unclear when it will be safe to travel again, but my hope is that I will be able to leave by January 2021. Thankfully, over the past few summers, I have received funding from the Council on African Studies, the History Department, and the Center for the Study of Race, Indigeneity, and Transnational Migration here at Yale to conduct preliminary research for my dissertation, so I have archival documents and oral histories that I can work with right now. I plan to write a chapter of my dissertation using these materials while I wait to go abroad for my full research year.