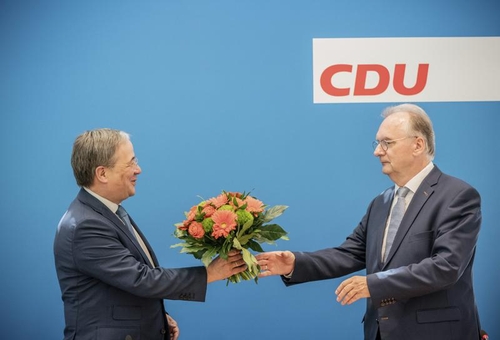 On Sunday, voters in the German state of Saxony-Anhalt went to the polls to elect a new Landtag, the state’s legislative assembly. The last of several state elections this year prior to the September 26 election in which Germans will elect a new Bundestag, all eyes were on the eastern state to see how well the Christian Democratic Union (CDU) under its recently-elected leader Armin Laschet, the Minister-President of North Rhine-Westphalia, would do and, by inference, how well the CDU and its Bavarian sister party, the Christian Social Union (CSU), might do in September without Chancellor Angela Merkel as their chancellor candidate. Attention was focused, in particular, to see whether, as several polls suggested, the CDU would not only attract a smaller share of the vote than the 29.8 percent it won in Saxony-Anhalt five years ago but would also be outvoted by the xenophobic, right-wing populist Alternative for Germany (AfD), which won 24.3 percent of the vote in the state in 2016.

The results, reported late Sunday evening, stunned the pollsters, prognosticators and commentators who had confidently predicted the CDU would lose support and the AfD might displace it as the leading party in the state. When all the votes had been counted, the CDU had 40 of the 41 constituency seats and 37.1 percent of the party list vote, a gain of 7.4 percent over its 2016 vote; the AfD had won only one constituency seat and only 20.8 percent of the party list vote, a loss of 3.5 percent compared with its 2016 vote. Obviously, the salience of the immigration issue that gave rise to the surge in support for the AfD after 2015-16 has receded dramatically and the AfD’s effort to attract support by criticizing the federal and state policies in regard to Covid-related lockdowns proved to be less effective in generating support than its earlier xenophobic reaction to the inflow of migrants had been. In addition, members of a faction within the AfD and some leaders have been placed under investigation by the BfV, the German intelligence service, for possible extremism and terrorism.

The CDU’s surprising performance means that its leader in the state, Minister-President Reiner Haseloff, will in all likelihood be able to reconstitute his coalition government with the SPD and the Greens or, in the event either the SPD or the Greens pull out, the FDP. He has made it clear that, in accordance with the CDU’s cordon sanitaire in regard to the AfD, he will not under any circumstance govern with the AfD.

The CDU’s surprising success in Saxony-Anhalt yesterday will undoubtedly give its leadership and members some degree of confidence that, as implausible as it may seem, they may be able to win reelection even without Angela Merkel as their chancellor candidate. Nevertheless, it would be foolish to draw any inferences, much less strong inferences, about a federal election that will take place four months from now from an election in one small state in eastern Germany. A slew of polls taken over the last month suggest that national support for the CDU & CSU remains in the range of 25-26 percent, well below the 32.9 percent the parties obtained in the 2017 election, while that for the AfD, at 11-12 percent, remains close to the 12.6 percent it won in 2017. And the CDU & CSU also need to worry about the FDP, which won 10.7 percent in 2017 and is drawing between 12-14 percent in recent polls, and, especially, the Greens, which won 8.9 percent in 2017 and are now polling in the range of 20-24 percent.

Yesterday was a good day for the CDU—a very good day. But whether it can replicate its 2017 vote, much less the share of the vote it won in Saxony-Anhalt yesterday, on September 26 remains to be seen.