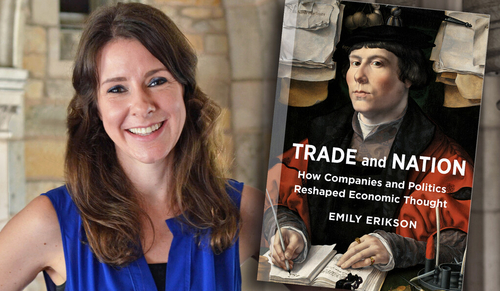 These debates echo a shift in economic thinking that occurred in 17th-century England, when members of a rising commercial class began publishing works on trade and finance in order to influence government policy. In arguing for their preferred policies, these writers generated a new economic discourse — one that emphasized national growth and prosperity and set the stage for today’s discipline of economics.

In Emily Erikson’s latest book, “Trade and Nation: How Companies and Politics Reshaped Economic Thought” (Columbia University Press), the Yale sociologist examines this revolution in economic thinking, focusing on the years between 1570 and 1720.

Erikson, an associate professor of sociology in Yale’s Faculty of Arts and Sciences and director of the Fox International Fellowship at the MacMillan Center, recently spoke with Yale News about the project. The interview has been condensed and edited.

What inspired you to write the book?

Emily Erikson: While working on my previous book, “Between Monopoly and Free Trade: The English East India Company, 1600–1757” [Princeton University Press], I noticed that a surprisingly large number of important economic tracts of the period were written by people associated with companies. I thought that was striking and it made me think that there was something about the companies and economic theory that hadn’t been fully uncovered. It’s strange to think about. Imagine if Jeff Bezos was writing treatises on economics. I think people might find it a little suspect. People found it a little suspect back then, too, but conditions were different.

As I worked on the book, I realized that I was answering an important question: Why did economics in Europe start to focus less on inequity and more on national development? It’s not that national development isn’t important. It’s hugely important. But the inequity part got buried under the rising focus on national prosperity. I wanted to better understand why that happened, and how we might bring equity and fairness more clearly into focus today.

What was the status of economic thought before 1570?

In universities, economics was thought to be beneath the notice of philosophers and serious scholars. There were no economics departments and no real concept of “the economy” as a distinct system. Most of the people who were writing seriously about economics were Christian scholars and theologians. They were very concerned with the impact of economic behavior on the human soul. They thought about the kinds of economic behavior people can engage in and still be fair to other human beings. Setting a just price was one of their central concerns. How much can you justly charge for bread when people are starving? At what point does a price become evil?

There was no concern for equality in the sense of raising people up to the same socioeconomic level, but they believed that wealthy people shouldn’t impoverish or take advantage of others, which would be considered sinful behavior. That was a central concern in debates about charging interest, which they called usury, and whether one can make money from money and what that implies about the value of money.

How did economic thinking change after 1580?

By the 1600s, you have a large influx of English merchants into the discourse who aren’t so interested in the implications of economic behavior on the human soul. They might gesture toward that theme, but it’s not their central concern. Instead, they’re making arguments about how economic behavior, such as charging interest, affects capital markets and how that impacts trade and, ultimately, the wealth and prosperity of the nation. They replaced the old moral framework that emphasized equity, justice, and salvation with one grounded in the nation’s wealth and prosperity.

Who were the merchants driving this change?

These were relatively wealthy individuals from large overseas trading companies. They were involved in complex corporate ventures that were granted rights to trade specific goods, such as white linen or dyed cottons, or rights to trade in goods to specific locations like the Baltic Sea or the East Indies. They largely operated outside the halls of government and were very interested in influencing trade policy, such as the granting of the charters that allowed companies to operate. Many produced tracts laying out their arguments. In so doing they forged a new kind of economic discourse almost inadvertently.

Why did England become the engine for this shift in economic thought?

From the perspective of the early modern era, it’s strange that this happened in England because the Dutch Republic was much more economically dynamic at the time — and politically powerful. It was the “Golden Age” of the Dutch. The important difference was that the Dutch government was dominated by merchants. If Dutch merchants wanted to change a policy, they didn’t need to go outside the halls of government to do it. English merchants, on the other hand, were in a minority position in Parliament. They needed to persuade state actors to implement new policies that were favorable to their commercial interests. To do so, they made their appeals in the public sphere using the tools of persuasion available to them, including writing and publishing economic tracts. In order to convince people that their arguments were legitimate and not simply about self-interest, they tried to show how their preferred policies would benefit the nation.

What did you learn while working on this book that most surprised you?

When I started this project, I thought that the huge expansion in the economic literature in this era was probably the result of the global expansion of trade. That was my initial hypothesis: As trade becomes more complex, more sophisticated intellectual tools were needed to understand it. But it turns out that’s not the case. It wasn’t the early stage of globalization that triggered the revolution in economic thought; it was the political context and the position of merchants within English politics that drove the discourse. That surprised me.

The shift in economic thought you document began more than a century before Adam Smith published “The Wealth of Nations,” in 1776, one of the fundamental texts in modern economics. How did Smith make use of the work that had preceded him?

Many of the materials I examine in the book set the foundation for “The Wealth of Nations.” The way that Adam Smith melded the observations of people making somewhat self-interested arguments into a cohesive whole was an extraordinary accomplishment. He tied ideas about national development and growth to a theory of moral behavior and action, lending them a moral perspective that people often seem to overlook. He was very concerned with fair and equitable exchange between individuals and the negative impacts of colonialism. He was deeply opposed to slavery and very concerned about the way that monopolies can take advantage of the population. He weaved a moral perspective into what had become a very empirical literature in a way that I find amazing.