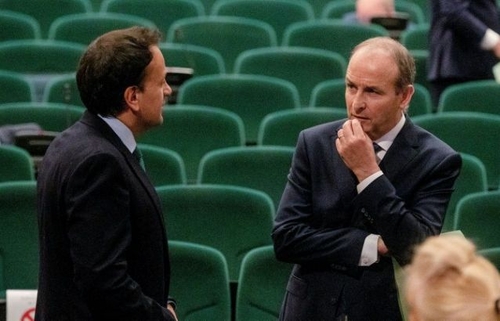 In February, voters in Ireland went to the polls and gave Sinn Féin, for many years the political wing of the Irish Republican Army, a stunning victory. It won 24.5 percent of the First Preference Votes in the country’s Single Transferable Vote form of proportional representation, an increase of more than 10 percentage points over the 13.8 percent it won in 2016. For a party that didn’t abandon its policy of not taking seats in the Dáil Éireann, the lower chamber of the parliament, until 1986, didn’t win more than 3 percent of the FPV until 2002, and didn’t win more than 10 percent until 2016, Sinn Féin’s victory was not only stunning but historic.

Negotiations over the formation of a new government, complicated by the development of the coronavirus pandemic, went on for the better part of four months, until June 15, when another equally stunning and historic development occurred—a tentative agreement, subject to the approval of the members of the parties, between the centrist Fianna Fáil party headed by Micheál Martin and the center-right Fine Gael party headed by outgoing Taoiseach (head of government) Leo Varadkar to form a coalition government along with the Greens. Fianna Fáil won 22.2 percent of the FPV, compared with 24.3 percent in 2016, and Fine Gael won 20.9 percent, compared with 25.6 percent in 2016. The Greens won 7.1 percent of the FPV, compared with 2.7 percent in 2016. Together, the three parties have 85 of the 160 seats in the Dáil.

Fianna Fáil and Fine Gael have dominated Irish politics since the founding of the Irish state in 1922. Indeed, they, plus Fine Gael’s predecessor, have headed every government but have never governed together, unable to bridge the divisions that resulted from the Anglo-Irish Treaty of 1922 that ended the Irish War of Independence of 1919-22 and gave rise to the Irish Civil War of 1922-23. On Friday, the members of the three parties approved the government program, in each case by a substantial majority, and on Saturday the members of the Dáil, meeting in the Dublin Convention Centre rather than in Leinster House in order to maintain social distancing, elected Martin as Taoiseach of the coalition government. Varadkar spoke for many when he said, “Civil war politics ended a long time ago in our country, but today civil war politics ends in our parliament.” Martin will serve as Taoiseach through 2022, after which Varadkar, who was appointed Tánaiste (deputy head of government), will replace him for the remainder of the government’s five-year term.

The previous election having taken place in Feb. 2016, the next one wasn’t expected until early 2021. But it became clear late last year that Varadkar’s minority government, which depended on a “confidence and supply” arrangement in the Dáil with Fianna Fáil to remain in office, was on thin ice and might be defeated. In December, reflecting widespread public discontent over shortages of available housing, rising rents and increasing homelessness, a motion of no confidence in the minister for housing was defeated by only three votes. And in early January, widespread complaints about overcrowded hospitals and delays in getting access to health care prompted the tabling of another motion of no confidence, this one targeting the minister for health. Several days later, Varadkar, who had been Taoiseach since replacing Enda Kenny as leader of Fine Gael in June 2017, requested President Michael D. Higgins to dissolve the Dáil and call a new election.

Given the widespread concerns about housing and health and the fact that it had been in power since 2011, there was good reason to think that Fine Gael would lose support in the election and that Sinn Féin, in particular, would do well. And indeed, pre-election polls indicated support for Fine Gael had dropped from roughly 30 percent last fall to 20 percent while support for Sinn Féin had increased from roughly 15 percent last fall to 25 percent. The polls indicated Sinn Féin would do especially well, and Fine Gael and Fianna Fáil especially badly, among young voters; more than 30 per cent of those aged 18 to 34—the cohort most adversely affected by the housing shortage and high rents—supported Sinn Féin while less than 30 percent of that cohort said they supported Fine Gael or Fianna Fáil. The younger voters were attracted at least in part by Sinn Féin’s progressive left-of-center program that, among other things, called for a substantial increase in spending for construction of housing and increased taxes on business.

On the other hand, and notwithstanding the housing and health crises and the fact that it had been in power since 2011, no one could deny that the Fine Gael governments had presided over a dramatic recovery from the severe economic contraction in 2008-09 and the collapse of the banking system and financial crisis that led to an €85 billion bailout by the EU and IMF in November 2010. Coming to power only a few months after the bailout, the Fine Gael government was forced to administer the prolonged dose of fiscal and monetary austerity agreed by the Fianna Fáil government as the quid for the quo of the bailout. But after three years of negligible growth, by 2014 the economy had returned to the high rates of growth characteristic of the late 1990s and early 2000s, and the rate of unemployment, which had reached 15 percent in 2010-12, had dropped each year thereafter and by early 2020 was in the vicinity of 5 percent.

Nor could anyone deny the advances in the rights enjoyed by Irish citizens after the approval in referendums of three constitutional amendments put forward by the Fine Gael government—in May 2015, the 34th amendment, which granted the right of marriage to two persons without regard to their sex; in May 2018, the 36th amendment, which permitted Parliament to legislate for abortion; and in May 2019, the 38th amendment, which removed the constitutional requirement for a defined period of separation before the dissolution of a marriage. But voters have short memories and in February they turned their collective back on Varadkar and Fine Gael.

In Ireland’s Single Transferable Vote form of proportional representation, 160 seats in the Dáil are allocated among 39 constituencies, in each of which voters elect three, four or five Teachtaí Dála (TDs, members of the Dáil). Voters in each constituency indicate their preferences for the candidates on a ballot, a quota is calculated, the candidate or candidates exceeding the quota are elected, the second preferences of the surplus votes for the candidate or candidates exceeding the quota are distributed to the other candidates, and the counting and transferring process is repeated, with the lowest-placed candidate eliminated in each iteration, until eventually all of the seats are allocated.

When all of the seats had been allocated after the February election, it wasn’t at all clear which parties would form a new government. Although Sinn Féin had won a stunning victory, because it underestimated its support in planning for the election and ran only 42 candidates in the 39 constituencies, it won only 37 seats, a gain of 15 but fewer than it might have won had it run, as Fine Gael and Fianna Fáil did, roughly 80 candidates. Minus the Speaker, who is elected without opposition and doesn’t vote, there are 159 voting TDs. Fianna Fáil won 38 seats (including the Speaker), a loss of 7, and Fine Gael won 35 seats, a loss of 12. Several smaller parties also won seats—most notably, of course, the Greens, who won 12 seats, a gain of 9. Also, 125 Independents ran—one of the quirks of the electoral system is that individuals can run for seats as Independents—and won 12.2 percent of the FPV and 19 seats.

Given the distribution of seats, not only did no party have a majority in the new Dáil but no combination of any two of the three largest parties had a majority. However, it was possible that, with one or more of the smaller parties and/or the support of some independents, any two of the three largest parties could form a coalition having a majority in the Dáil. Mary Lou McDonald, who replaced Gerry Adams as leader of Sinn Féin in February 2018, announced the day after the election that she had already discussed forming a coalition with the Greens and several smaller parties on the left but was open to discussing a coalition with Fianna Fáil or Fine Gael as well. Martin made some ambiguous comments initially about being open to such a coalition but later backtracked while Varadkar immediately ruled out any coalition with Sinn Féin.

Martin and Varadkar opened negotiations between their parties, later joined by the Greens, on a possible program for a coalition government and the discussions, obviously complicated by the worsening health situation, eventually produced an agreement on June 15, subject to the approval of the parties’ members. The program, more than 100 pages in length, addressed a number of the key issues that arose in the Dáil last year and committed the parties to increasing housing construction, improving healthcare, increasing public transportation and, to no one’s surprise given the need to win the support of the Greens in order to secure a majority in the Dáil, a number of policies that addressed climate change, including a commitment to reduce greenhouse gas emissions  by 7 percent each year.

In addition, and looming above all the other priorities, the program committed the parties and the government they hoped to form to a national recovery plan to repair the damage to the economy inflicted by the pandemic. The OECD Economic Forecast issued earlier this month estimated that if there is no second surge in infections, hospitalizations, and deaths, Ireland’s GDP will drop by 6.8 percent this year and unemployment, which was 4.8 percent in the first quarter, will increase to 10.3 percent by year-end. But if there is a “second hit” in the fourth quarter, GDP will drop by 8.7 percent and unemployment will increase to 16 percent. And even if there is not a “second hit,” the effect of the pandemic on employment has been even more severe than is reflected in the rate of unemployment; indeed, the Irish government estimates that currently more than one-quarter of those employed are receiving COVID-19-related wage subsidies without which they might well join the ranks of the unemployed.

On Friday, the members of the three parties approved the program, in all three cases by substantial majorities, and on Saturday the Dáil, meeting in the Convention Centre, elected Martin Taoiseach by a vote of 93 in favor to 63 against with 3 abstentions. As a result, for the first time in the history of the Irish state, Fianna Fáil and Fine Gael are partners in government. As Varadkar said, “today civil war politics ends in our parliament.” About time.