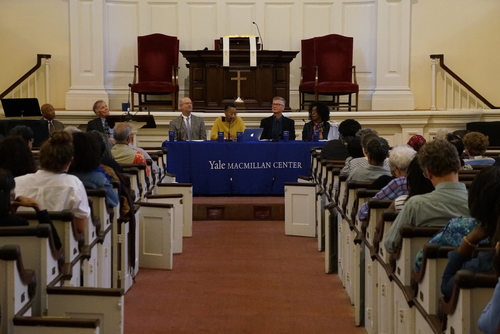 “What is it about this moment we’re living in, not just the Trump moment but a longer moment, that makes it possible finally to talk so seriously about slavery in public ways?” David Blight, Sterling Professor of American History at Yale and Director of the Gilder Lehrman Center, proposed this question at the start of the panel discussion “400 Years: African Americans, 1619-2019.” Commemorating the 400th anniversary of the purchase of “20 odd Africans” at Jamestown, Virginia in 1619, this public program was organized to celebrate the 50th anniversary of the African American Studies Department at Yale University.

Hosted by the First Church of Christ in New Haven—commonly known as Center Church on the Green—the panel discussion brought together the residents of New Haven, members of the Yale community, and a panel of three esteemed scholars of race and slavery, two of whom are alumni of Yale’s African American Studies graduate program. The event was organized by Yale University’s Department of African American Studies and was co-sponsored by the Gilder Lehrman Center for the Study of Slavery, Resistance, and Abolition at the MacMillan Center; the Afro-American Cultural Center; the Department of History; and the Center for the Study of Race, Indigeneity, and Transnational Migration. 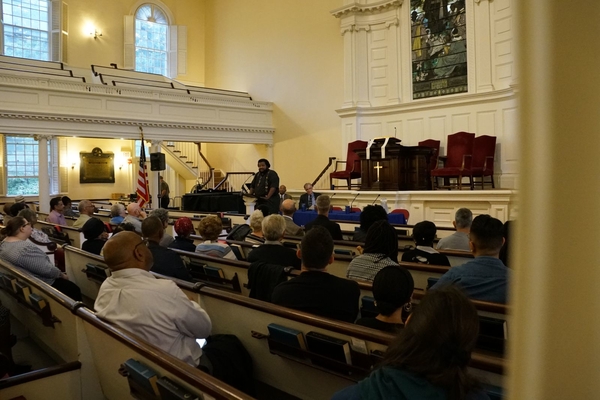 Reverend Kevin Ewing, minister of the First Church of Christ in New Haven, delivers a blessing to open the “400 Years: African Americans, 1619-2019” panel discussion, hosted by Center Church on the Green.

Gerald Jaynes, Professor of Economics and African American Studies at Yale, opened the event. He remarked that “this 400th anniversary is an occasion for both celebration and solemnity. We descendants and heirs of the seventeenth century Africans and Europeans who began this nation, should celebrate the achievements made since 1619. But we must also face the brutal realities of 400 years of slavery, Jim Crow, and dilemmas of racial inequality that continue despite great progress on many fronts.” Professor Jaynes went on to explain that the New Haven Green provided an ideal space to recognize the solemnity of this occasion. Reverend Kevin Ewing, minister of the First Church of Christ on the Green, then provided a blessing and a brief history of the Center Church before turning the podium over to David Blight, who introduced the panelists and raised a poignant question for everyone in attendance: “What is it about this moment?”

Edward Rugemer, Associate Professor of African American Studies & History at Yale, moderated the lively discussion of slavery, race, democracy, and their legacies today. Situating the discussion, Stephanie Smallwood, Associate Professor of History at the University of Washington, described the circuitous journey of the first “20 odd Africans” brought to Virginia. Originally departed from the port of Luanda, the capital of modern-day Angola, on the Portuguese slave ship, the San Juan Bautista, Smallwood emphasized that the journey of these Africans was not the typical triangular route. After the English privateer ship, the White Lion, attacked the San Juan Bautista - on its way to the Spanish-American colonial port of Veracruz - and stole 50-60 enslaved Africans on board, the White Lion and its crew went on to dock in Point Comfort, Virginia, where they sold “20 odd Africans” into enslavement. Prompted by Professor Rugemer, Professor Smallwood described what life might have been like for these captives and how these “20 odd Africans” likely ended up on a Portugese slave ship. The captive people, 20-30 of whom would eventually be sold in Virginia, were part of a cargo of 350 men, women, and children who were likely war captives. With succinct prose, Smallwood narrated how 350 Angolans “were dispersed across the Atlantic. Almost half to reside in death in the ocean depths, and the rest conscripted to the dispossession and colonization of American Indigenous lands.”

Turning to the settlement in which the “20 odd Africans” had been purchased to labor in, the panelists described what life was like for these early settlers. Founded in 1607, Virginia’s “first phase of development was one of continual struggle, for both the English colonizers and the indigenous Powhatan.” This early period was a time of development for the English colonizers who were desperate for food and information. Originally the English were looking for what panelist James Horn, President of Jamestown Rediscovery Foundation, called “the pearl and the gold”—the failed attempt by the English to replicate the Spanish’s version of colonization-the search for gold, silver, and other precious metal mines in North America. According to Dr. Horn, the early colonial period, Virginia was “a transitional moment in the development of English society in America.” Because of the absence of plantations in early English settlements in Virginia, “large numbers of bound laborers, whether indentured servants or enslaved people” were not needed. Nevertheless, the English colonists were eager to buy these Africans and were eager to participate in the slave trade. The seventeenth century was driven by Englishmen’s desire to make great profits in the New World and they eventually accomplished this through the transatlantic slave trade, leading to the expansion of English colonization, Native American displacement, and African enslavement.

Wanting the audience to get a complete picture of the lives of these “20 odd Africans,” Professor Rugemer turned to Brenda Stevenson, Professor and Nickoll Family Endowed Chair in History at UCLA, to convey what everyday life would have been like for these people. Professor Stevenson explained that in early seventeenth century Virginia, kidnapped African men, women, and children would have labored on small tobacco plantations alongside white indentured servants. According to Professor Stevenson, “Africans and Indentured white servants got on fairly well, so well in fact the new legislature - established in 1619 - had to start passing laws that said not to get along. Which said you cannot mingle socially, you cannot marry, you cannot have sex, you cannot do any of the things people were obviously doing.” Africans, white indentured servants, and indigenous people interacted socially often. European and African people may not have arrived together but they enter Virginia at about the same time, at the same ports, and were treated similarly. This led to an organic intermingling that the legislature wanted to halt.

Bringing the discussion to the present, the panelists considered some of the contemporary legacies of this early purchase of enslaved Africans and the laws later enacted. Seventeenth century Virginia, one of several English colonies, was impacted by the 1661 Barbados slave codes. These Barbadian slave codes set two precedents. First, that if a black person stuck a white person they could be killed, and second, the codes established two different judicial systems for blacks and whites. Professor Stevenson described how the precedents set by Barbadian slave codes continue to create inequality in our criminal justice system today. In today’s society people still think they can harm black people and get away with it, as long as they prove that they felt threatened. Hashtags like #BlackLivesMatter #SayHerName serve as reminder that black and brown people continually suffer unjust punishment and violence. Dr. Horn also informed the audience that presently in Jamestown, there are several monuments built in honor of the bravery and courage of the first white English settlers who “founded” Virginia and the U.S. However, praises for the contributions of Native Americans and African Americans remain shrouded and obscured. In the 400 year legacy of African enslavement in the U.S. and simultaneous displacement of Native Americans, addressing racial inequality remains one of our greatest contemporary challenges.

The event concluded with questions and comments from the audience. These questions underscored connections between the present moment and the past. Audience members called attention to threads between black gun ownership and enslaved resistance, policing and slave patrols, and a long history and continuing hyper-criminalization of black people. This was a moment of dynamic conversation between the panelists and the audience. While this particular moment and convening of scholars and the greater public had come to a close, the longer moment is sure to continue. This moment - one in which we talk about slavery in such public ways - is a focal point, built on the momentum of centuries of African Americans and Native Americans fighting for their rightful place in the history and present of American society.