Congressional response to the Coronavirus pandemic 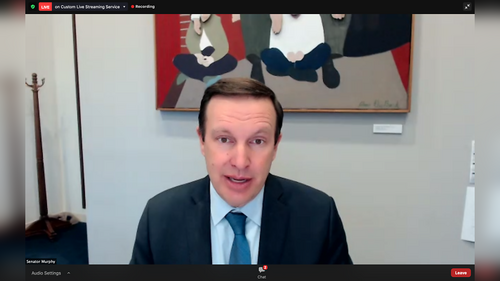 U.S. Senator Chris Murphy (CT D) spoke with Dr. Saad Omer, director, Yale Institute for Global Health (YIGH), on October 27, about the congressional response to the coronavirus pandemic and what needs to be done within the political arena to prepare for future global health crises. The talk was part of YIGH’s Global Health Conversation Series supported by the George Herbert Walker, Jr. Lecture in International Studies at Yale MacMillan. (View Discussion)

Dr. Omer introduced the Senator as a strong voice in the fight for affordable health care and global health policy and an early champion for a robust response to COVID-19. The virtual discussion was part of the YIGH Conversation Series and touched on several topics including the need for ongoing bipartisan compromise to address this and any future pandemic and the government’s role in counteracting misinformation to the public.

“If we are not fighting pathogens everywhere, then we are vulnerable here,” said the Senator. He explained how the President of the United States can commandeer resources for a war but not for a global health crisis – something he wants to change. “We have to make a big commitment to global health in this Congress and work to build a permanent capacity inside the medical supply chain. To do this, we need to work together with our allies around the world and produce the most important supplies necessary to meet demands within the U.S. for any future pandemics.”

The Senator sees the public skepticism towards science, due to mass exposure of misinformation, to be just as critical an issue. To help the public gain more trust in the proper resources, he is working on legislation for a public education campaign that would include working with social media outlets to help them better identify misinformation. “There is division among the public on what to believe in science and I see that as a failing of our political system,” said the Senator. “And health misinformation can be deadly.”

He concluded by saying that the U.S. spends $12 to 20 billion a year on global public health, but spends $700 billion a year on conventional military construction. “That is not the right ratio given the threats presented to the United States.”

YIGH launched the Global Health Conversation Series as a moderated forum for the Yale community and alumni to listen to and learn from some of today’s pivotal decision-makers in the world of global health and the COVID-19 pandemic. To learn more, please visit the  Conversation Series page.