Culture, State and Empire: Scholars Gather to Celebrate Gil Joseph’s Impact on Latin American Studies at Yale and in the World 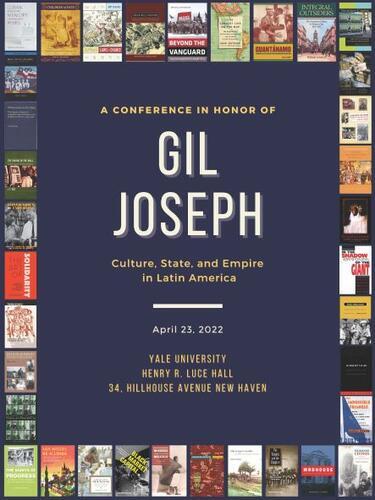 Known as ‘Gil’ to his friends and colleagues, Gil Joseph has played a leading role in some of the most important publications in the field’s last four decades. His seminal co-edited volume, Everyday Forms of State Formation (Duke 1994), brought culture into the study of the state in Mexico, transforming how political scientists, historians and anthropologists conceptualize state formation in the region.

In articles like “On the Trail of Latin American Bandits: A Reexamination of Peasant Resistance,” Joseph synthesized perspectives from British social history, Subaltern Studies, and Latin American Studies. With precision and theoretical and empirical rigor, he pushed for an integrated analysis of elite and popular politics.

Gil’s impact can also be seen in his contributions to the crowded field of histories of the Mexican Revolution. He has published four monographs, including the classic Revolution from Without: Yucatán, Mexico, and the United States, 1880-1924. In numerous articles and thirteen edited collections, he pushed modern Latin American history and Cold War studies in new, transnational directions while contributing to broad scholarly discussions on the nature of revolution and resistance.

Jim Scott, emeritus professor of political science at Yale, credits Joseph with “teaching me that there are a multitude of revolutions within any event which we might call a revolution. And that understanding any ‘revolution’ requires a thorough examination of this complexity. His lesson has served me well.”

A renowned collaborator and convenor, Joseph has served as editor of the Hispanic American Historical Review as well as president of the Latin American Studies Association during its fiftieth anniversary year.

“Gil Joseph’s impact on the field of Latin American history during the last three decades is virtually unrivaled,” said Barbara Weinstein, professor of history at New York University.  “I would attribute this both to his remarkable openness to new ways of thinking about longstanding scholarly issues, and his amazing capacity to bring together historians, whether in conferences or pathbreaking edited volumes, who are taking intellectual risks and formulating new ways to conceptualize Latin America’s place in the most urgent historical debates.”

The one-day conference highlighted another of Joseph’s lasting impacts on the field: his mentorship and training of future and current historians. As a professor at the University of North Carolina Chapel Hill and at Yale University, Joseph supervised over 60 Ph.D. dissertations.

Former student of Joseph and current professor of history at Yale, Greg Grandin, notes that “Gil’s scholarly contributions are too many to easily sum up.  As a teacher and a mentor, he conveyed this historical intelligence with a gentle and insightful empathy, always willing to work with students according to their own interests, their own curiosities.”

At Yale, Joseph is also known for his tenure as Chair of the Council on Latin American & Iberian Studies (CLAIS) between 1994 and 2005. Under his leadership, CLAIS held a competitive Title VI Award as a National Resource Center for Latin American Area Studies, a prestigious designation from the United States Department of Education that brings funding for research and outreach to the university that holds it.

Titled “Culture, State, and Empire,” the conference held in Luce Hall on Saturday, April 23 convened a distinguished roster of scholars and former and current students.

In four panels – rethinking political economy; nation and state formation; empire, revolution, counter-revolution; and new understandings of the Cold War – and one final roundtable, scholars assessed the current state of Latin American historiography in the broad themes to which Joseph himself has contributed: culture, the state, and empire.

Both provocative and theoretical, the day’s discussions showed where this tremendous career of ongoing collaboration is sending us now.